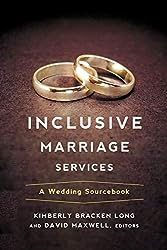 Marriage and family continue to play a central role in our society, but marriage patterns are changing. It's not just the legalization of same-sex marriage, though that is a major change requiring a rethinking of our marriage ceremonies, there are many other factors as well. The wording of most ceremonies assume what we might call a traditional pattern that involves a male and a female, who are probably getting married for the first time, and are moving from their parents' home to a new life together. That pattern has long been abandoned—especially moving from the parents’ home. Today, couples are waiting longer, likely living together before marriage, might be remarrying after divorce, and could already have children. And that's just heterosexual couples! When coupled with the possibility of same-sex weddings, the time is ripe for new sets of resources to be published. This new resource is designed to be used in a variety of settings, without regard to whether the partners are of the same gender or not. That is, they are fully inclusive!

This set of resources was put together by editors Kimberly Bracken Long and David Maxwell, who gathered together a group of liturgical writers, that includes Kimberly Clayton, David Gambrell, Ruth Meyers, and Bradley Schmeling. Four are Presbyterians, one writer is Episcopalian, and the other Lutheran. As for the editors and their qualifications, Long is Associate Professor of Worship at Columbia Theological Seminary and editor for the well-received Feasting on the Word Worship Companion series, while Maxwell is acquisitions editor for WJK Press, the publisher of this resource. The editors write in their introduction that these services and resources “echo Christian convictions about covenant, commitment, fidelity, and love. They are written by people who treasure their denominational heritages and appreciate good liturgical language. What is different about these services is that the language for couples is not gender specific” (p. xiii).  They also note that they don’t put an emphasis on procreation as chief end of marriage. There is a sense of tradition, but a good sense of inclusion as well.

The book is comprised of three sections. Part one provides a series of complete services, four of which have been created for this book. The first liturgy is simple in structure but has a good feel to it. The second service is more involved and includes communion. The note at the beginning of the service suggests that it is “well suited for those who have been in a long-term committed relationship” (p. 8). In addition to the communion service, there is a prayer of confession and declaration of forgiveness. The inclusion of the confession is interesting, as I’ve not seen this before. The third service was designed with couples with children living at home in mind, and it includes a section where the children are brought into the conversation. Liturgy D is provided for a variety of other situations, including weddings when either one of the participants is not a practicing Christian or is of a different faith.  It is distinctly Christian, but "broadly inclusive of those who may not be Christian." That is important in and of itself. In addition to these four services, the editors include five other services that have denominational roots, including the Church of Scotland, the Presbyterian Church (USA), and the United Church of Christ. Each of these services has already been updated for inclusivity. Thus, all nine services are designed to be used in a variety of settings, whether couples are gay or straight. All seem to have a Reformed bent. Some are simple and others complex. Of the services, I liked Liturgy A, which was the simplest of the four new services. The fourth service, however, is intriguing as it can be used for a wedding of persons of differing faiths.

The second section of the book provides additional liturgical texts that can be used in each element of a service. There are calls to worship, declarations of intent, prayers of confession, Eucharistic texts, vows, charges, benedictions. Everything you will need to construct a service is here, and everything is really plug and play. The texts overlap at times, but offer different ways of giving voice to the purpose of the event. There is, as one would expect from a service rooted in the Reformed tradition, a focus on Covenant. Altogether there is a treasure trove of materials to be used to construct a service. Indeed, if you like your existing service but simply need new more inclusive wording, this should fill the requirement admirably.

The third and final section offers a series of essays covering a variety of concerns that clergy and couples will face in planning a wedding service. The issues covered include interfaith weddings (suggesting ways of bringing in both traditions), couples with children (there is good advice here that goes well with the materials provided for including children), same-gender weddings, music, scripture, symbols, walking the aisle. They even offer a few wedding sermon ideas as well as an important word about the place of the sacraments as well. One word of advice that should be heeded, but which can cause problems with couples is the place of the Eucharist if it is included. The editors remind us that Eucharist is a public action and thus if it is included all should partake, not just the couple.

Most of us who work with couples could use some fresh material. The editors and writers have done us a great service with this set of resources. For the most part there is a traditional feel, even as the language is modern and inclusive. They are written in such a way that they can be used by any couple whether gay or straight.

If you are involved in planning weddings of any type, especially if you’re clergy, I would suggest that you pick up a copy before you meet with that next couple!
Email Post
Labels: Books Inclusiveness Kimberly Bracken Long Liturgy Marriage Reformed Tradition Reviews Same-Sex Marriage Wedding Services Weddings