The Salvation of God - Lectionary Reflection for Advent 2C 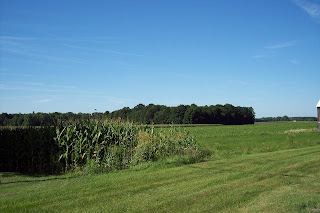 3 In the fifteenth year of the reign of Emperor Tiberius, when Pontius Pilate was governor of Judea, and Herod was ruler of Galilee, and his brother Philip ruler of the region of Ituraea and Trachonitis, and Lysanias ruler of Abilene,2 during the high priesthood of Annas and Caiaphas, the word of God came to John son of Zechariah in the wilderness. 3 He went into all the region around the Jordan, proclaiming a baptism of repentance for the forgiveness of sins, 4 as it is written in the book of the words of the prophet Isaiah,

“The voice of one crying out in the wilderness:
‘Prepare the way of the Lord,
make his paths straight.
5 Every valley shall be filled,
and every mountain and hill shall be made low,
and the crooked shall be made straight,
and the rough ways made smooth;
6 and all flesh shall see the salvation of God.’”

*****
It was in a moment of time that preparation began to be made so that all flesh might see the salvation of God. According to Luke, this took place during the reign of Tiberius, when the sons of Herod the Great, Lysanius, and Pontius Pilate had been given responsibility for the region called Palestine and its environs. Such is the message of the second Sunday of Advent: God has made provision for a messenger who will break through the morass of a violent world to clear a path for the one who will be the salvation of God. On the first Sunday of Advent, the Gospel reading pointed us toward the final moments of Jesus’ earthly ministry. Jesus told his disciples to Stay alert; keep watch (Luke 21:34-36). With that in mind, we take note of the calling of John, son of Zechariah, who has been entrusted with the work of preparing the way for the salvation of God to be revealed.

According to the first chapter of Luke, this was John’s destiny. From the very beginning his life would be intertwined with his kinsman Jesus. In adulthood, he lives into his calling and begins this ministry of preparation. So, now in the words of Isaiah 40:3-5, John is the one crying in the wilderness, offering to all those who will heed his call, a baptism of repentance that leads to forgiveness. The Gospels make it clear that John was not the bearer of salvation. He was the one who lays the foundation, so that God’s agent of salvation might be revealed to the world. Luke wants us to know that this took place in time and space. It’s not a metaphor or simply a nice story. It is much more.  It is a reminder that God the Creator is invested in the creation and its future. But in this vision, the world is flattened out, as Isaiah declared, so all can see God’s salvation. As one who loves the mountains and the valleys, this might not seem good news at first. But it is an understandable vision. The point is being able to see the salvation of God and be affected by it.

So what is meant by the salvation of God? What is being revealed? It is Jesus, of course. This is the message of both Advent and Christmas. God the Creator is revealed to us in the person of Jesus. It is the message of the incarnation that stands out here, even if the entirety of the message is to be revealed. What we know from this reading in Luke 3 is that John has taken up his position of preaching and baptizing (word and sacrament?), and that he is doing so in preparation for the unveiling of God’s salvation.

This unveiling occurs in a particular context. It is important to remember that Luke frames John’s work in the context of a particular political situation. It is one where violence and oppression are the norm. As Dennis Smith helpfully points out, the majority of persons named by Luke have a role in the deaths of Jesus and/or John. Both political and religious leaders are implicated, reminding us that more often than not religion and politics get intertwined in such a way that religion is coopted. Annas and Caiaphas owed their jobs not to God’s calling, but to the benefice of Rome. They were creatures of Rome, entrusted with keeping things quiet. Both John and Jesus upset the status quo. They were rabble rousers.  They were perceived by the elite to be problems and both were killed as a result. [Feasting on the Gospels--Luke, Volume 1,  p. 67].

What made John and Jesus a problem is that they offered an alternative vision of reality; one where the justice and peace of God reigned. In this Advent season we’re invited to consider what this alternative realm looks like and then decide if we want to embrace it. When the salvation of God is revealed, will we recognize that it is from God. Will our eyes and ears be alert to this presence? Then, if we’re alert and see/hear, will we be ready to receive it?

I conclude with these words of Karl Barth concerning the kingdom and the presence of God in Jesus:

The kingdom of heaven does exist already; from God’s side action has been already taken for our good. To pronounce the name of Jesus Christ means to acknowledge that we are cared for, that we are not lost. Jesus Christ is man’s salvation in all circumstances and in face of all that darkness his life, including the evil that proceeds from himself. There is nothing which not already made good in this happening, that God became man for our good. Anything that is left can be no more than the discovery of this fact. We do not exist in any kind of gloomy uncertainty; we exist through the God who was gracious to us before we existed at all. [Karl Barth, Dogmatics in Outline, p. 71].

John has taken up the calling of Isaiah, and made the way smooth, so that the salvation of God, who was gracious to us before we even existed, can be made known. Thanks be to God!