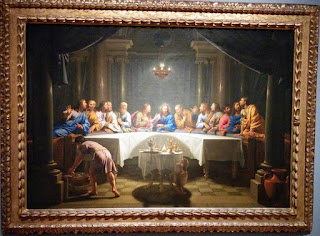 Holy Week is upon us. One event in Holy Week is the gathering on Thursday to remember the meal Jesus shared on the night before he went to the cross. According to biblical tradition Jesus was participating in a Passover Meal (Luke 22:7-23). This meal forms the foundation for the Christian practice of the Eucharist. In most Christian communities, Jesus’ “words of institution” will be pronounced over the elements of bread and wine (or grape juice) whenever the community gathers at the Table for communion. The question that vexes the church is who should be invited to the Table.

Since at least the second century a majority in the Christian community have assumed that only the baptized (or the confirmed) should come to the Table and partake. This makes this sort of a family meal, and the boundaries of this family are starkly drawn. It may be that on Holy Thursday, an invitation will be given and some in attendance will be purposely excluded. There are theological reasons for doing this, but I wonder whether they are true to the spirit of Jesus.

Recently I participated in a Google Hangout session with our publisher Henry Neufeld. We talked at some length about the concept of the “Open Table.” I think that many churches practice an open table whether they advertise it or not. They do this by simply not checking the credentials of those who come. They might even issue an open invitation without thinking very deeply or very theologically about what it is they’re doing. In essence it is a matter of being nice. We’re going to have a meal and we don’t leave anyone out. But what is the rationale?

I believe that we should practice an open table. I don’t think anyone should be excluded from the Table, and I don’t say this simply because it’s bad manners to exclude. I believe that this is true to the original spirit of Christian table fellowship. I will add, that I even believe that those who practice faiths other than Christianity should be invited to the Table. That maybe a fairly radical idea, but I think it represents good Christian theology.

I believe we should practice an open table for several reasons. First of all, I believe that it is true to the Passover spirit. If you’re a Christian and you’ve been invited to a Seder, you have been included in their faith experience even if you’re not Jewish. Secondly, I believe this is true to Jesus’ own Table fellowship. Jesus never excluded people from the Table, unless they self-excluded. He was criticized for dining with undesirables, and often that dining experience resulted in a conversion experience. If we believe that Jesus is present at the Table, and I do, then he is the host, and if he was inclusive in his invitation list shouldn’t we be as inclusive? Much more needs to be said, but I think we need to do some hard thinking about this question. This is especially true for Table centered communities, like my own. Disciples of Christ practice frequent communion, by which I mean at least weekly if not more often. In the Disciples tradition, which is my own tradition, whenever we gather for worship we will likely share in Table fellowship.

The next question of sacramental interest has to do with Baptism. Traditionally baptism has been understood as the initiatory sacramental rite. First you get baptized, then you get to take communion. That became Christian practice as early as the second century, but I don’t believe that it is a New Testament practice. The two are never linked in scripture. So if we practice an open table, which means that the Table is the initiatory rite, what do we make of baptism? That question needs a lot of unpacking, and I don’t have space here to do that unpacking. However, if baptism is no longer the initiatory rite, then perhaps it serves as a point of confirmation of a deeper commitment to God. In other words, we get baptized when we’re ready to fully embrace the call to discipleship, a call that is first expressed at the Table.

For more on the Eucharist and its meaning see my book  The Eucharist: Encounters with Jesus at the Table (Energion Publications)