It’s a New Day, A New Pathway! A Sermon for Lent 5C 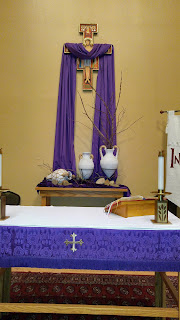 Eight years ago this month Cheryl, Brett, and I came out to meet and greet the congregation. It was a most interesting trip that included picking out the home we now live in. Just so we would know what we were getting into, it snowed while we were here. Then on Sunday morning, in her sermon, Shirley suggested that it was time to let go of the ghost of Edgar Dewitt Jones. That name might not mean much to some, but for others it represents the heart of Central Woodward. Even long after his passing, this founding pastor has been revered. While I enjoy reading his sermons and letters, I would say that his ghost is haunting other places these days. Shirley’s point, of course, was that a new day was coming and it was time to let go of some of the past.

Lent is a season of letting go. The stories we’ve been exploring as we’ve moved through Lent have spoken about wandering in the wilderness. We’ve heard stories about moving from one place to another. Last week we even heard a word about arrival. But now we’re back on the move. It seems as if that’s the way it is with the people of God. After all, our spiritual ancestor was a “wandering Aramean” (Deut. 26:5). When you’re a wanderer, you had better travel light. That means letting go of things.

When we were packing to move here nearly eight years ago, we had to make some decisions. I even had to leave behind some books, and it’s never easy for me to cull my library! Fortunately for us, we had a moving van that would move our stuff across the country. But, if you don’t have a moving van, well then you have to leave things behind.

It’s interesting that the lectionary places this story from Isaiah after the Joshua story of arriving in the Promised Land. But then, maybe that’s the point. Israel may have settled in and even set up a small empire, but that was all in the past. Now, Jerusalem was destroyed, and Israel’s leadership was living in exile. That’s the audience that Second Isaiah addresses.

When the people arrived in the Promised Land under Joshua’s leadership, they were presented with a day of new beginnings. They got to put down roots and till the soil. Now Israel lived in exile. As they looked back, they pined for what was once theirs. But the prophet tells them to forget the past and embrace the new thing that God was doing with them and for them. While they needed to remember how God led the people through the sea and into freedom from slavery, they also needed to look forward. The question the prophet posed to them was whether or not they could see what God was doing!

The prophet put his finger on the problem they were facing. They were caught up in “former things,” and when you’re focused on “former things” you often can’t see what God is doing right now.

We’ve talked before about nostalgia. And nostalgia can be fun. Those of us who frequent Facebook know all about this. We like to reminisce about the old days. People put up a picture of a rotary dial telephone and ask whether we remember that wonderful piece of equipment. People of a certain age will “like” that picture. I really don’t think we want to exchange our smart phones for that old phone, but the picture reminds us of “former things.” And “former things” can look enticing, because it’s part of our story. The future, on the other hand, well we don’t where that will lead.

It would seem that the exiles were experiencing a bit of nostalgia. Maybe they were even content living in exile. After all, Babylon wasn’t that bad – if you give it a chance. It’s the big city. There’s lots to do. The people are educated. So why would they want to go back to Jerusalem. Why not just remember it the way it was in its days of glory.  The prophet will hear none of this. God is going to do a new thing. It’s time to pack up and get ready to move. Just like Abram and Sarai centuries before, it was time to head out on a new journey.

When the prophet speaks of this new pathway that God’s going to lay out, he’s talking about an infrastructure project that will lead back to Israel from Babylon. God is going to do this so that the people, whom God has chosen, “might declare my praise.”

We know something about infrastructure projects here in Michigan. We have lots of roads and bridges that need to be rebuilt. There’s also a regional transit system to be built.  A number of us are going this week to speak to the Oakland County Commissioners about the upcoming millage vote. We want to encourage them to support it.  This will, of course, be a new thing for our region.

When it comes to this congregation, I have this feeling, deep in my bones, that God is doing a new thing. The question is – do we perceive what God is doing?

Just last Sunday we embraced several new members. Each of them brings new energy and gifts to this community. Later this morning we will commission several people to help us engage in a new listening campaign connected to DRIVE, the Detroit Regional Interfaith Voice for Equity. This listening campaign will be similar to what we did several years ago with MCC, only it’s for a new organization that needs to discern its path forward. So, don’t be surprised if you receive a call! Then in about a month we will gather in our elder clusters to consider the Inclusion Statement drawn up by the Elders. This statement, if we embrace it, will signal to the broader community that we truly welcome all people.

By the way, have you been hearing those chirpings of little babies in the sanctuary? Isn’t that a beautiful sound? New life; new possibilities. Next Sunday we’re going to bless three of our little children, committing ourselves to supporting them and their parents as they take the journey of parenthood and seek to bring up their children in the faith. It is good to remember the instructions given to the people of Israel:

Yes, recite them to your children. We as church are called on to embrace these children as our own. This raises the question – how are we as a congregation going to invest in their lives? Will we lift them up? Will we walk with them as they take their own journeys in the Wilderness? We often talk about the children being our future. That is true, but they are also our present!

I believe that God is doing a new thing. God is laying out a new pathway. When new roads get built, it can be messy and even inconvenient at first. If you had to take a detour this morning to get here because Big Beaver is under construction between Adams and Woodward, you know what I mean. But think about the long term blessings.

What is the new day that is dawning for us? What does the future hold? Where is God leading us? Are we ready to embark on this new pathway? As Paul declares to the Philippian church:

Not that I have already obtained this or have already reached the goal; but I press on to make it my own, because Christ Jesus has made me his own. Beloved, I do not consider that I have made it my own; but this one thing I do: forgetting what lies behind and straining forward to what lies ahead, I press on toward the goal for the prize of the heavenly call of God in Christ Jesus. (Phil. 3:12-14).

The Lenten Journey is coming to an end, but even as it ends with the cross, on Easter we begin a new day. So let us keep moving forward into God’s new future. Yes, today is a day of new beginnings, time to remember and move on!