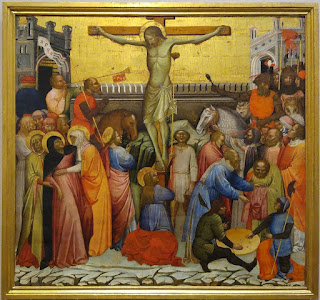 It is Good Friday. We find ourselves at the foot of the cross, where Jesus, our Lord, hangs, suffering and dying. It is an image that has defined the Christian faith. It has inspired manifold pieces of art. It is found in one form or another in most of our congregations. The cross has traditionally been understood, at least in relationship to humanity, in terms of atonement. Jesus died on the cross and as a result we who are estranged from God are reconciled to God. There are varieties of atonement theologies, though in American Christianity the most prominent is known as “penal substitution.” That understanding that has its roots in Anselm’s “satisfaction” theory presents problems for many Christians, including me. Many progressive Christians have abandoned atonement theologies in total, but in doing this we often lose contact with the cross and a certain richness to our theologies.

On this Good Friday I want to call us back into conversation with the cross. Luther’s theology of the cross, a theology embraced by among others Dietrich Bonhoeffer, was offered up as a challenge to a triumphalist theology of glory.  But some of the traditional categories and conversations fall short. We need to find new ways of engaging the cross so that we might be transformed by its riches.

With this in mind I have been spending time with Deanna Thompson’s book Crossing the Divide (Fortress, 2004). Deanna is a feminist theologian of the cross, and I made use of Deanna’s book yesterday in relationship to the Last Supper, and I wish to bring her back into the conversation. I’m intrigued by her reimagining Luther’s vision of the marriage analogy of a joyous exchange, which presents significant problems for us, with her concept of friendship as joyous exchange, an exchange that transforms.

Rather than a joyous exchange between Christ and the wicked harlot, I propose a metaphor that better matches the sensibility of a feminist theologian of the cross. It is the model of friendship: God's atoning work for us on the cross is done through Jesus's befriending humanity. Drawing on Luther's most beloved gospel narrative of John, we hear Jesus tell his disciples that "No one has greater love than this, than to lay down one's life for one's friends" (15:13). This model is suggested in the spirit of Luther's use of various images-from the devil capturing the bait to the bridegroom taking on the sins of his bride-to convey the meaning of the cross. Luther's theology of the cross was constantly applied and adapted to various occasions, and this occasion for a feminist theology of the cross calls out for an image that will better "express certain aspects of the God-world relationship in our time.""' Luther likely utilized the metaphor of marriage for the self-giving love that ideally exists between spouses. In John, the image of friendship explains the meaning of Jesus's life and, specifically, his death on the cross. The image of Jesus laying down his life for his friends highlights the "gift character" that is crucial to Luther's understanding of what God did on the cross. Sallie McFague points out that friendship implies a certain freedom; it is less laden with a sense of duty than marriage is as traditionally understood)."' Friends freely choose to be in relation to one another. Is that not an appropriate image of Jesus's willingness to give of himself? Jesus was not paying a debt to God. Jesus the Friend acted freely, giving his very life on behalf of his friends.  [Deanna A. Thompson. Crossing the Divide (Kindle Locations 1761-1771). Kindle Edition.]

Her idea of the self-giving nature of Jesus’ friendship being transformative offers, I think, a way forward, toward engaging fully the cross as a place in which God brings forgiveness, reconciliation, and restoration to our lives.  She speaks of the future orientation of remaining in the love of Christ that is expressed through this act of friendship, even in the face of betrayal. Thus, even as Jesus experiences our suffering and sense of abandonment, in the end God does not abandon him, nor does God abandon us, we who are Christ’s friends.  There is more here to be explored, but let us on the Good Friday not let go of the cross, but seek to understand its power in ways that reflect the love of God for all humanity.
Email Post
Labels: atonement Deanna Thompson Friendship Good Friday Martin Luther Reconciliation Theology of the Cross