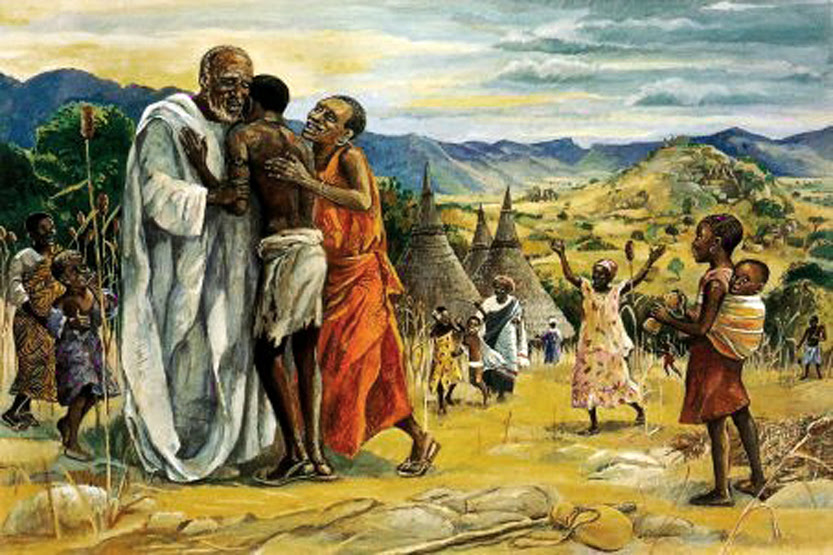 15 Now all the tax collectors and sinners were coming near to listen to him. 2 And the Pharisees and the scribes were grumbling and saying, “This fellow welcomes sinners and eats with them.”

3 So he told them this parable:

25 “Now his elder son was in the field; and when he came and approached the house, he heard music and dancing. 26 He called one of the slaves and asked what was going on. 27 He replied, ‘Your brother has come, and your father has killed the fatted calf, because he has got him back safe and sound.’ 28 Then he became angry and refused to go in. His father came out and began to plead with him. 29 But he answered his father, ‘Listen! For all these years I have been working like a slave for you, and I have never disobeyed your command; yet you have never given me even a young goat so that I might celebrate with my friends. 30 But when this son of yours came back, who has devoured your property with prostitutes, you killed the fatted calf for him!’ 31 Then the father said to him, ‘Son, you are always with me, and all that is mine is yours. 32 But we had to celebrate and rejoice, because this brother of yours was dead and has come to life; he was lost and has been found.’”

What more can be said about the parable of the Prodigal? With the exception of the parable of the Samaritan (also in Luke), this is likely the best known of Jesus’ parables. You don’t have to go to church to know this story as it is part of the fabric of Western society.  Perhaps one of the reasons we know this parable is that seems to represent something of our own life experience. How many of us have been the prodigal? Or perhaps the older brother? Maybe we’ve been the gracious parent.

The story has always been seen as one of grace. But to understand the message we might want to consider the context. The lectionary places the parable within a context of a conversation between Jesus and his critics, who are scandalized by whom he has chosen to dine with. He is accused of eating with sinners. And as we were all taught growing up, your character will be demonstrated by the company you keep. Jesus, obviously was hanging out with the wrong kind of people. In telling the parable of the Prodigal Jesus seems to turn the conversation on its head. The company Jesus keeps doesn’t speak of his character, but the transformative nature of his dining habits.

In answer to the critics of his dining habits Jesus tells the story of a young man who decides that he wants to go out and see the world. He doesn’t want to wait until his father has died to see the world, and so he requests that his father give him his portion now, while the father is still living. As is often pointed out, in doing this, the young man is declaring his father dead. He is effectively cutting himself off from his family. In other words, he is a sinner, if by sin we think in terms of turning our backs on God and God’s ways.

As the story proceeds, things begin to go bad for this intrepid traveler. He ends up broke and facing famine. He ends up feeding pigs. Not only that, he begins to envy the pigs for what they’re eating. That is, the pig farmer (most assuredly a Gentile) is less than generous to the farm hands. Things are going so bad he’d be willing to eat the slop offered the pigs.  For a Jew this has to be humiliating. Not only is he broke, but he is servicing an animal considered unclean. It is at this moment that the young man comes to his senses. He remembers that his father is a kind and generous employer. If he goes home not as a son, but as a hired hand, life will be bearable. With that he leaves behind the sty and heads toward his father’s home. He even rehearses a speech to give to his father.

The story takes an unexpected turn (at least for those who haven’t heard it before). As he nears his father’s home, his father runs out to greet him. You see, the father has been watching for his son, hoping that his son will decide to return home. He goes up to his father and begins the speech he had rehearsed, but the father didn’t let him finish. Instead, he welcomes him home with open arms. He tells the servants to bring the best robe for his son and even throws a party, featuring the fatted calf.  All is wonderful. The family is back together. Just one problem—there’s another son, the older son (I’m the oldest of two so I know how this works), and this older son is none-to-happy with the father’s actions. After all, he had been faithful while the younger son took off to live the dissolute life. This isn’t fair. It isn’t right. There are rules and rules to be obeyed.

At first read, I engage the parable as a parent. I wonder how I would respond to my own child’s decisions. My hope is that I would be gracious and welcoming should my child find himself in difficult straights. I know some parents would not do so, but most parents I believe would. I think that this parable resonated with the hearers. They believed that if they were in the same position they would act in like manner. If this is true for a human parent, then surely the same would be true for God.

Of course, Jesus wasn’t merely giving parenting advice. He was speaking of the divine human relationship. Remembering that this was a patriarchal society we can understand the usage of father in this case for God. Thus, God is pictured as one who is gracious, as one whose arms are open to the one who seeks to be reconciled. In fact, God is pictured here as a father who is looking for his child’s return. There is expectation here.

This brings me back to the context. The critics are upset that he is eating with the wrong kind of people—people like the prodigal. The critics are like the older son. They believe that one shouldn’t include the sinner among one’s dining partners. And Jesus was committed to the open table. Indeed, the Table becomes a place of forgiveness and reconciliation. So perhaps we need to hear the parable anew in light of our Table fellowship. Is the Eucharistic Table open to only those who are righteous? If so, then on what basis do we come? Or is the Table a place of grace, where God restores those who are lost to membership in the family of God?