I’m not in on the Revolution 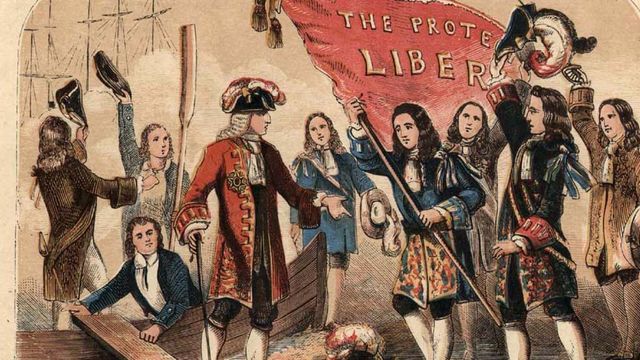 Revolutions tend to be blood affairs. Even the Glorious Revolution, which was largely bloodless as far as revolutions go, still had its share of blood. Ever hear of the Battle of the Boyne? If you’re Irish, you probably know about it. Though it occurred in Ireland it pitted the forces of James II, the former king of England, against the forces of his son-in-law who had run him out of England, William III.  Not much fighting in England, but I think the Irish still are fighting it!

While the American Revolution is 240 years in the past, we’re hearing a lot of revolution speak of late. On the one hand, Bernie Sanders has been calling for a “political revolution,” while on the other hand, Donald Trump seems intent on burning down the house. I realize that the system is broken, but I’m not sure we’re in need of a revolution. A revolution, in my mind, would entail a complete scrapping of the American constitutional system. Maybe some are interested in that, but I’m not on board with it.  The system isn’t perfect, but it provides a stability that few other political systems have. We have three branches of government that provide checks on each other. It can be messy at times, and it’s definitely inefficient at times, but I think the Founders wanted it that way. But, for it to work, we all have to be informed and involved.

Here’s my thinking on this matter (for a moment I'm going to enter into a bit of partisan politics). What we need isn’t a revolution or a burning down the house. What we need is for people to educate themselves and then get involved in local affairs.

What I have to say from here on out is directed at my fellow Democrats, because I think that conservative Republicans have already gotten the message.  In recent years I’ve noticed that Democrats are really good about coming out to vote in years when there is a Presidential election. But, in off year elections, when most state-wide and local elections are held, Democrats seem to be largely absent. That’s why you have thirty-one Republican governors, many of whom serve normally “blue” states. Republicans also control a majority of state legislatures. So, even though Barack Obama won big in Michigan in both 2008 and 2012, our congressional delegation is predominantly Republican, our governor is a Republican, and our legislature is run by Tea Party Republicans. Why is that? It’s a good question, that needs an answer!

I believe that true change will come when foundations for change are laid at the local level. After all, the adage has always been, “all politics is local.” While many complain about Washington, city council elections are often decided by tiny numbers of voters (unless they coincide with a Presidential election), and typically those voters are older, whiter, and more Republican. I may be wrong, but I think this is because Democrats believe in top-down solutions. We think that if we elect a President then all is well, but unless that President has a Congress that is willing to be in partnership, and state and local governments that are on board, not much happens. That’s been the challenge faced by Barack Obama since the 2010 elections.  Now I'm not saying that Presidential elections aren't consequential, for they are. Consider just one item -- Supreme Court nominees. Want to get rid of Citizen's United, well make sure that the next President will select nominees willing to overturn it!

So, rather than start another revolution (and count me out of the revolutionary fervor), why not get involved at a local level and begin laying the foundations for true change. Indeed, why not start by running for school board!!
Email Post
Labels: American Revolution Democratic Party Elections Glorious Revolution local politics politics Revolution