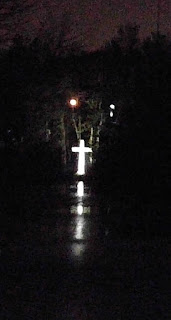 21 After these things Jesus showed himself again to the disciples by the Sea of Tiberias; and he showed himself in this way. 2 Gathered there together were Simon Peter, Thomas called the Twin, Nathanael of Cana in Galilee, the sons of Zebedee, and two others of his disciples. 3 Simon Peter said to them, “I am going fishing.” They said to him, “We will go with you.” They went out and got into the boat, but that night they caught nothing.

4 Just after daybreak, Jesus stood on the beach; but the disciples did not know that it was Jesus. 5 Jesus said to them, “Children, you have no fish, have you?” They answered him, “No.” 6 He said to them, “Cast the net to the right side of the boat, and you will find some.” So they cast it, and now they were not able to haul it in because there were so many fish. 7 That disciple whom Jesus loved said to Peter, “It is the Lord!” When Simon Peter heard that it was the Lord, he put on some clothes, for he was naked, and jumped into the sea. 8 But the other disciples came in the boat, dragging the net full of fish, for they were not far from the land, only about a hundred yards off.

9 When they had gone ashore, they saw a charcoal fire there, with fish on it, and bread. 10 Jesus said to them, “Bring some of the fish that you have just caught.” 11 So Simon Peter went aboard and hauled the net ashore, full of large fish, a hundred fifty-three of them; and though there were so many, the net was not torn. 12 Jesus said to them, “Come and have breakfast.” Now none of the disciples dared to ask him, “Who are you?” because they knew it was the Lord. 13 Jesus came and took the bread and gave it to them, and did the same with the fish. 14 This was now the third time that Jesus appeared to the disciples after he was raised from the dead.

*******
John 21 is a rather odd chapter. In many ways it seems like an addendum to the gospel. John 20 offers us resurrection appearances and commissioning of the disciples, along with a summation of the gospel. What more does one need? Why John 21? The author does offer us one explanation. This is the third appearance, but is it? That is, has the editor put that phrase in the narrative so as to connect the two scenes. Whatever the reason for adding this epilogue, the story is lively and enlightening. The focus is on Peter’s rehabilitation and his commissioning.

It is helpful to place this story in its larger context by looking back to the night of the trial of Jesus. Peter was standing nearby, but when confronted as to whether he knew Jesus, he vociferously denied it. In fact, he denied Jesus three times (John 18:12-25). In this passage Jesus asks Peter three times whether he loves him—more than any of the others.

This final chapter takes place along the Sea of Tiberias (Sea of Galilee). At least seven of the disciples have made their way north to their homeland in Galilee. As they sit there contemplating the water, Peter decides to go fishing. Why not? That was is profession before he headed off on his adventure with Jesus. That adventure was over, so now he could go back to work doing what he knew best. His friends decided to help him. Though Peter was an experienced fisherman, they didn’t catch a thing. So, after they spent the night out on the lake, at dawn the head back to shore. As they near the shore a figure on the beach shouts out to them. He tells them to cast the net on the other side of the boat. I’m sure that Peter was in no mood to get advice from someone standing on the beach, but on the other hand, since they had come up with nothing during the night, it wouldn’t hurt to try one more time. So they cast the net and behold the nets filled with fish, more than they could haul in. At that moment the Beloved Disciple recognizes the figure, and tells Peter— “It’s the Lord.”  Yes, the Lord who multiplied loaves and fishes to feed the multitude was standing before them (see John 6).

The Beloved Disciple recognizes Jesus, but it’s Peter who acts upon this discovery. The Beloved Disciple seems to be the contemplative one, while Peter is the man of action. So, once Peter realizes that its Jesus standing on the shore, he can’t wait to get to him. One of the more humorous parts of the story occurs at this moment. Peter apparently had stripped down during the course of his night of fishing, and so he was naked. When he recognized Jesus he became aware of his nakedness, and so he put on his clothes before jumping into the lake and swimming to shore. Normally, people do the opposite. They take off their clothes before going swimming. Peter does the opposite.  When he arrives on the beach he finds Jesus waiting for them. Jesus had even built a fire so they could make breakfast with the recently caught fish. The reference to eating the fish may be John’s way of reminding us that Jesus’ resurrection had a physical dimension. He’s not a phantom or a ghost. He’s a heavenly being, but with materiality.

The question raised by the story concerns Peter’s vocation. Will he go about his work as fisherman? Or will he take up a new vocation. With that question mind, we turn to the end of the meal. Having had their fill, Jesus takes Peter off to the side, and engages him in conversation. Jesus asks Peter whether he’s ready to not only be his disciple but take leadership. Jesus asks Peter three times whether he loves him more than the rest of the disciples? Peter says of course I love you, though by the third time Peter is a bit bewildered by the continued questions. As for Jesus, each time Peter responds with yes Lord I love you, Jesus commissions him to feed and tend his sheep. Who are these sheep? Jesus could have in mind the church. Or perhaps the world itself.

It is important to remember that this is an Easter reading. We need to keep in mind that the resurrection is front and center. Death has its match. The question is: what will we do as a result? Peter thought about going fishing. That is, getting back to normal. But Jesus had something else in mind. He had work for Peter to do. Once Jesus rehabilitated Peter, and commissioning him to care for the sheep, the question must be asked of us. What role do we play in this story?

Thomas Troeger writes of this epilogue:

If Peter can be rehabilitated, the same is true for us. If Peter is called to care for the sheep, then the same is true for us.  Jesus stands on the beach, as the light of God, and he calls out to us in our darkness and invites us to follow him into the light, that we might become beacons of light. Or to put it a bit differently, with Peter we can move from fishing to tending sheep!
Email Post
Labels: Commission to Ministry Easter Gospel of John Lectionary Ministry Peter Reflections Resurrection appearances

Bill Schlesinger said…
FWIW - agape is the word used in the scene of the 'new commandment' where Peter says he'll lay down his life and is told he'll deny Jesus three times.
11:10 AM