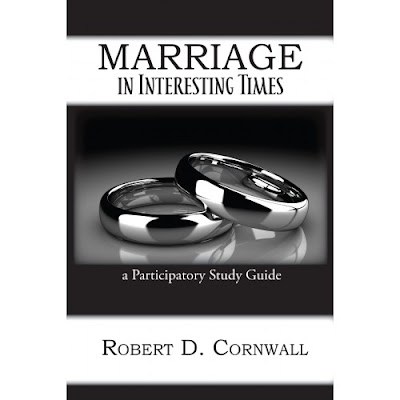 I wanted to share word that the release of my newest book is on the near horizon.  Titled Marriage in Interesting Times, this is part of the Energion Publications Participatory Study Guide series. It is specifically a bible study guide dealing with marriage that invites us to rethink how we understand the Bible and what it might say about marriage for a twenty-first context where marriage is no longer the sole domain of a "man and a woman." We hear people talk about "biblical marriage," but in many ways this vision of "biblical marriage" is more a twentieth century vision than a biblical one.

In the introduction to the book I write this about my reasoning with regard to the book:

I titled the study guide “Marriage in Interesting Times,” because we are living at a time when profound changes in the way marriage is understood. Not that long ago, it was assumed by many in American society that traditional marriage not only involved a man and a woman, but the man was the head of the household and the woman was a homemaker. The man earned the money, and the woman cared for the children and kept the house in order. Then came the idea that husband and wife were equal partners in the marriage. In most cases both partners worked outside the home, and they shared more equally the duties of the home. Today, the definition of marriage has evolved one more time to include same-sex couples … So, when we talk about marriage in the twenty-first century, at least in the United States, and a number of other nations around the globe, we must remember that the legal definition, if not the religious one, includes both gay and straight couples. Yes, these are interesting times.

If you're interested in diving into biblical texts that speak to marriage, I offer this book as a helpful resource. I don't write as a professional Bible scholar or as a marriage family therapist. I write from the perspective of one who is a pastor, a theologian, and as one who has been married for over thirty years (I did take a theology of the family class in seminary!).