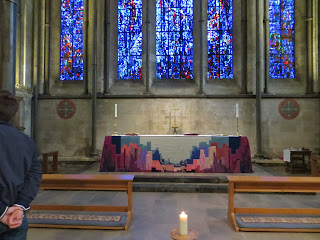 During this Easter season we are attending to the words of the Book of Revelation. It is a book of the Bible that many have found difficult to understand and easy to misuse. That has led persons ancient and modern to rid the canon of its embarrassing statements.  Nonetheless, there is something powerful about this image-laden book. It requires that we let loose our holy imaginations.

As an ordained minister in a denomination that has valued a reasonable/rational faith (we're good Lockeans), I know that our people find it difficult to embrace mystery. I shared in my sermon yesterday a word from Alexander Schmemann, that speaks of being in the Spirit in terms of being drawn into the heavenly realm. It is easy to disparage the idea of being drawn into the heavenly realm as contributing to an abandonment of this world and its need for transformation. My concern is that for many in our churches, we end up in a position of overvaluing the intellect and undervaluing the imagination.

Schmemann makes this comment about the eucharistic liturgy, speaking of the "sacramental entrance into the risen life of Christ.

The liturgy of the Eucharist is best understood as a journey or procession. It is the journey of the Church into the dimension of the Kingdom. We use this word “dimension” because it seems the best way to indicate the manner of our sacramental entrance into the risen life of Christ. Color transparencies “come alive” when viewed in three dimensions instead of two. The presence of the added dimension allows us to see much better the actual reality of what has been photographed. In very much the same way, though of course any analogy is condemned to fail, our entrance into the presence of Christ is an entrance into a fourth dimension which allows us to see the ultimate reality of life. It is not an escape from the world, rather it is the arrival at a vantage point from which we can see more deeply into the reality of the world. [Schmemann, Alexander (2010-04-01). For the Life of the World (Kindle Locations 308-313). St Vladimir’s Seminary Press. Kindle Edition. ]

Note that Schmemann makes it clear that our procession into Christ is not an escape from the world, but a new vantage point by which we can view it. That seems to be what we need, a new vantage point in which we see the Spirit at work in our midst.  I fear that if we don't get to the point of letting go our need to control our own access (as well as that of others) to the heavenly realm, then we will not be of either heavenly or earthly good.  Therefore, may we let God set free our holy imaginations so we can see God at work on earth as in heaven!
Email Post
Labels: Alexander Schmemann Eucharist Imagination Reflection Spirituality