The Loss of Nuance 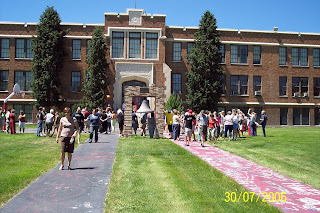 One of the biggest losses in any political season is nuance. Stump speeches and debates leave little room for nuanced discussion.  Part of this is due to the way the media poses questions, but they're not the only ones to blame. Our attention span seems to short at times to take in nuanced views. So, we jump on bandwagons without really examining the full range of pros and cons.

Let's take income inequality. It is a problem. But how do we resolve it?  I'm not sure I've heard good answers from any political candidate, because it's often placed in us versus them language.  Nuance is the  casualty.

Let's  take another issue -- in fact a related issue -- and that's -- trade pacts. It is true that NAFTA and other similar trade pacts have contributed to the decline of manufacturing in America. At the same time, they helped raise the standard of living in other parts of the world, along with bringing to American families lower cost products. Indeed, those ubiquitous smart phones we love likely were built somewhere other than the United States. Not only that, but the very materials, including the minerals and rare earth materials that are needed to create these phones come from places other than the United States.

The reality is that whether we like it or not, we are part of a global economy. Our economy depends on resources and products from across the globe. Whether it's that phone we love or the coffee we drink, we're dependent on other parts of the world. It's easier and cheaper than ever to bring into the country products we love to use. I was listening to NPR the other day. Edward Humes was being interviewed. He's written a book titled Door to Door, in which he described the impact of the shipping container. That big metal book made it possible to bring all kinds of goods across the seas cheaply and safely. Did trade deals contribute to globalization? Probably. But then so did the shipping container that brings that phone and TV to your door!

When it comes to economic change, I look at the realities of my own hometown in Southern Oregon. Klamath Falls was a thriving lumber town back in the day. From the time that the railroad came through in about 1910 until the early 1980s, Klamath Falls was a major player in the state of Oregon. At one time, it was one of the largest towns in the state. We had an Air Force Base, several large mills, and a college. Now, there's an Air National Guard base, but it's not the same. The college is still there and it's an important player in the city. As for the mills, by and large their all gone, and with them all the high paying union jobs. Back in the day, you could earn $20 an hour sweeping floors at Weyerhauser.  Then things changed. The Spotted owl was often blamed (as well as environmentalists), but the fact is most of the old growth timber was gone. The time it took to replenish a forest in the south was half that as in Oregon, and labor costs were less.  So the mills closed and moved south. Klamath, unlike Bend, 150 miles to the north, didn't have same access to recreational activities, especially skiing. Thus Bend surpassed Klamath, and today it's a ghost of what it was when I was growing up. We can lament this loss, and I do, but I'm not sure anything could have been done to change things. There simply wasn't enough timber to support all the mills.

I live in metro-Detroit. Many auto jobs that once employed low-skilled individuals at high pay were replaced by robots.  That is true across the industrial Midwest.

Did NAFTA affect some of these jobs? Most likely. But, that doesn't mean that there is no hope for good paying jobs. There are simply fewer well-paying low-skilled jobs. While college might be the path upward for some, there are still manufacturing jobs out there, they're just higher-skilled ones. While college costs have sky-rocketed, putting many at risk, we have failed to make available other pathways, especially apprentice-type pathways. From what I hear there are lots of high-skilled manufacturing jobs available, but not enough skilled workers. It's great to talk about free college something like that, but we're leaving out a lot of people that like working with their hands in creating things, but lack access to training.

If we're going to resolve the great challenges of the day, nuance is required!!