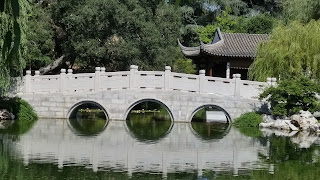 What a horrendous couple of weeks around the world. Dhaka, Istanbul, Baghdad, Medina, Falcon Heights, Baton Rouge, Dallas. Why the violence? Why does the world seem so broken?

This week we watched horrific video of African American men being senselessly shot and killed by police officers. In the second case, a man was shot four times as his girl friend's four year old daughter sat in the back seat. We are rightfully angry at such acts of violence. The number of shootings of African Americans, often during traffic stops, by police is mind-boggling. As a white male I cannot fathom what it might mean to be pulled over as a Black man in America. Such violence must stop, now.

Then last night, as a peaceful march and vigil in Dallas was coming to an end sniper(s) shot and killed five police officers and wounded seven other persons. It appears to have been a planned ambush. It might have been triggered by anger, but it wasn't spontaneous. Violence hi-jacked a peaceful protest against injustice in Baton Rouge, St. Paul, and elsewhere. And the divide widens.

How long O Lord will this continue?

I write this as one who is heartbroken, sad, and yes angry. It is time to come together and begin to build bridges. It's ironic that this shooting took place in a city known for its strong partnership between community and police. As the mayor shared in his press conference, Dallas has had the fewest police initiated shootings of any major city in America. It must be doing something right, and yet here violence struck.

The mission statement of my denomination, the Christian Church (Disciples of Christ), reads: "We are a movement of wholeness in a fragmented world." I embrace this principle. It is a guiding principle for my own life and ministry. I want to be a bridge builder not a wall builder. This is why I'm involved in the community, including community organizing. It's also why I've decided to apply to be a police chaplain in the city of Troy. From everything can see, and I've gotten to know an number of officers, including the Chief, quite well. This is a department that wants to be connected to the community. It takes seriously its calling to protect and serve. As a police chaplain I'll have opportunity to minister to officers and their families, but I can also be a liaison between the police and community. I can be a voice of conscience, and that I hope and pray I can be.

Diversity is good. Division is not! May the voices of hate grow silent and may the violence cease. May we commit ourselves to build bridges and not walls.

In this spirit I pray for the families of Alton Sterling, Philando Castile, and the five officers from Dallas, whose names I have not yet discovered. May they find peace and justice.

John said…
Blessed are the peacemakers for they will be called children of God.
9:22 AM