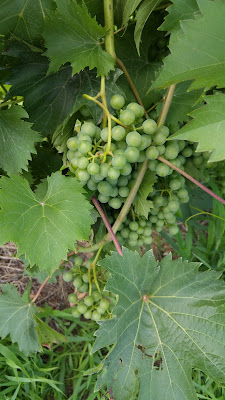 We have begun the Lenten journey. In the reading from the Gospel, Jesus has begun his sojourn in the Wilderness, where he will be tested (Luke 4:1-11). The people of Israel had been a wandering people and they two were tested.

The people of Israel wandered in the wilderness for forty years. That is the scriptural message, whether we take it literally or not. As the people of Israel draw near the river that separates them from the Promised Land, they are given instructions by God through Moses. The word we hear in Deuteronomy 26 envisions the people settling in, putting down roots, planting crops, and then harvesting the crops. With this assumption in mind, the call for first fruits is given. When the time comes to beginning harvesting the crops, the people are to take the first fruits of that harvest, put it in a basket and then bring it to the designated place where the priest will receive it. In doing this the people honor the God who liberated them from bondage, the God who was with them throughout the years of wandering and is now with them as they settle into life in the Land.

As we begin the Lenten journey, might we hear this word that comes to us from the Hebrew Bible as a call to worship and a call to stewardship? There is a liturgy involved, which reminds us that stewardship is an act of worship and not merely the means of paying bills. While it is a call to stewardship, it is also a call to share the proceeds of the harvest with others, most specifically the Levites (priestly class) and the “aliens who reside among you,” the bounty that God provides. Stewardship, it seems has something to do with sharing. It’s a concept we were supposed to learn in kindergarten, if not before, but a concept that is easily forgotten. Thus, instructions must be given.

As the offerings are brought to the altar, the people make a declaration of faith. They are called upon to remember from whence they came. Who am I? That is a question that continue to get asked. It’s a question that leads us to do genealogical work and check our DNA. In this confession, the people acknowledge that “A wandering Aramean is my ancestor.” The people of Israel, having finally found a place to settle in, are reminded by this confession that they have been a nomadic people. Their DNA is rooted in the tribes and people of Aram, which is the land of Syria and Southeastern Turkey.

So, who is this ancestor? Is it Abraham and Sarah? Yes. Is it Isaac and Rebecca? Yes. Is it Jacob and his family? Yes. In fact, it’s Jacob and his family who went down to Egypt and settled, only to discover that there was to be no security in that land. The initial benefits of living in Egypt proved fleeting. In time the wandering Aramean and family, though small in number, became a great nation. That led the Egyptians to feel threatened. They feared that a time would come when this tribe could gain enough strength to change the nature of Egyptian society. Does that sound familiar? Could it be a reason why some wish to build walls to keep “those people” from adding to their numbers? Is it a reason why there is a growing resistance to welcoming refugees to our shores? One scholar has even translated the opening declaration as “A wandering Syrian refugee is my ancestor.” So, as we contemplate this reading, could there be something of Egypt in our souls?

The confession remembers that Jacob’s descendants were treated harshly. They were sentenced to hard labor. When the descendants of this wandering Aramean cried out to God, their voices were heard. God saw the people being oppressed, and so God acted to liberate the people, bringing them into the Promised Land. Now, it is time to honor that God by bringing offerings to God as a sign of gratitude.

This reading from Deuteronomy speaks of a land that will be filled with milk and honey, a land of abundance. The confession serves as a reminder that the people of Israel are themselves immigrants and descendants of immigrants. They may have found a home, where they can settle in, put down roots, plant crops, but it is not a land to be possessed. It is a land to be received as a gift of God, to be shared. William Greenway writes of this concern: “by anchoring Israelite identity in an immigrant, a ‘wandering Aramean’; by reminding the Israelites that they were themselves poor, marginalized, oppressed strangers in a strange land; and by urging them to share their bounty ‘together with the Levites and the aliens who reside among you’ (so, no ritual or ethnic sectarianism; all attend to the basic needs of and break bread with all).” [Joel B. Green, Thomas G. Long, Luke A. Powery & Cynthia L. Rigby. Connections:A Lectionary Commentary for Preaching and Worship: 2 (Kindle Locations 1143-1146)].  Do we remember from whence we came? Do we come to the altar bearing expressions of first fruits, or what is left over from our abundance? Are willing to share, and what does that mean?

As you read this confession, you may notice that the person is to speak this confession as if experiencing the whole. This is a community confession that identifies the person with the community, and not just the present community, but the historical community. One’s current identity is rooted in one’s ancestry. What happened to Jacob and his descendants matters. We who are part of the family of Jesus, by adoption, have been brought in to this ancient tribe. We too are called to bring first fruits and acknowledge that our ancestors are wanderers, and thus we too should tread lightly on the land that is not ours but belongs to God. With this reminder that we are in many ways, spiritually, on journeys that involve a lot of wandering. We may have settled in and put down roots, but it is important that we continue to honor the one who liberated us, and we do this by being good stewards of God’s abundance.