On Pilgrimage - Across the Rivers


I have returned from a European trip that took Cheryl and me from Zurich to Amsterdam. Along the way we traveled from the fount of the Swiss Reformation -- the Gross Munster, the church served by Ulrich Zwingli -- to a land of religious toleration (the Netherlands). Along the way we visited as many churches as we could---I would have done more, but time didn't permit them all to be visited. We visited grand Gothic Cathedrals (Strasbourg and Cologne), the largest Romanesque church in existence (the Cathedral at Speyer), and several Baroque-era churches, some of which were Catholic and some were Protestant.

Before I meditate a bit on the nature of pilgrimage, I will simply say that Cheryl and I were blessed to be on this trip across Switzerland and then down the Rhine River. That the congregation understood the value of a sabbatical and that sabbatical grants are available that allow clergy to take trips of a lifetime can't be taken lightly. Thanks be to God for this opportunity!

Down through the ages people of faith have gone on pilgrimage. Many of the great cathedrals in 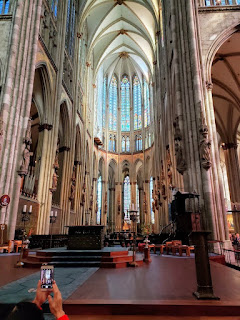 Europe are pilgrimage sites. For example, take the cathedral at Cologne. It is a massive Gothic structure that took some six hundred years to "complete." Yes, it is the site of the bishop, but more importantly, it houses relics said to be the bones of the Three Magi. They are housed in a Golden Reliquary (more about this later).  Other cathedrals represented imperial power -- consider the Romanesque cathedral at Speyer, which was built by four Holy Roman Emperors of the eleventh century (Salian Dynasty).

When I was planning for this trip I knew I wanted to visit Zwingli's church. It's not that I'm a fan of Zwingli. It's that he is a central figure in the tradition of which I am a part, that is Protestantism. As a Disciple, my tradition traces its roots through the Reformed tradition that includes people like Zwingli and Calvin. We didn't get to Wittenburg, but we did visit important Lutheran sites, including St. Thomas Church in Strasbourg, which was served by Martin Bucer, an important Reforming figure in France and who served for a time in England under Edward VI, helping to influence Cranmer's Book of Common Prayer. Ultimately in Strasbourg, the Catholics got the Cathedral and the Protestants got St. Thomas. They are different in structure and size, but both are imposing. A side note on St. Thomas Church, it houses an organ that dates back to the 18th century and which both Mozart and Albert Schweizer played on (I likely will blog on that as well). 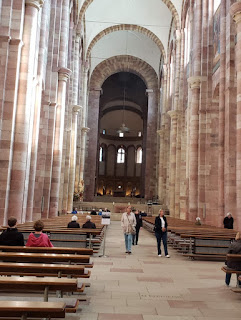 Interestingly, while Zwingli's church stood out at the beginning as the focal point of my journey, it was at Speyer that I felt most connected spiritually. I can't explain it, except that that excursion was a last-minute decision. It was one of the few times that Cheryl and I split up and took different excursions. The Heidelberg Castle was on her bucket list, as she had visited that city on a post-college trip, but didn't get to the castle. I had planned on going with her but finally decided that I needed to go to Speyer. There I visited the great Romanesque cathedral, which is relatively plain when compared to the Gothic Cathedrals but is powerful in its design. But not only did we visit the cathedral, but we visited two other sites. One of these sites was the remnants of a Jewish synagogue from the medieval period along with the Mikvah (ritual bath). Ther is much to this story to share later. Finally, we made our way to an early eighteenth-century Lutheran Church, where our guide had been confirmed many years before. This church was built after the troops of Louis XIV had destroyed the city in 1689, leaving only the cathedral standing (and it was damaged by a fire). This church featured a painted ceiling telling the biblical story in panels painted on spruce. It was magnificent. Yes, it was a moment of spiritual ecstasy. I shall have to share more on this in a later post.

It is important to go on pilgrimage. In the Islamic faith, the Hajj is a central tenet of the faith. In Judaism and Christianity, it is often the Holy Land. I've not made that pilgrimage yet, but this trip serves, like a previous visit to England in 2013, as a reminder of the traditions that bind us to our spiritual foundations. I am a product of that history that goes back through time to places like Speyer and Zurich to Ephesus and Jerusalem. I can't simply jump back over time from 19th Century frontier America to Jerusalem. Yes, pilgrimages can help us on our faith journeys.
Email Post
Labels: Cathedrals pilgrimage River Crossings Spiritual Blessings Ulrich Zwingli