Forgiveness and Its Expectations -- Lectionary Reflection for Pentecost 15A (Matthew 18) 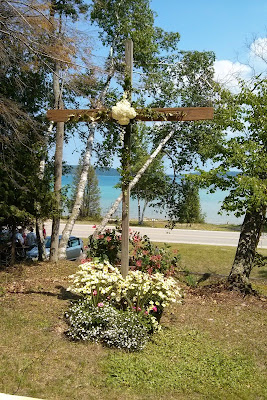 Then Peter came and said to him, “Lord, if another member of the church sins against me, how often should I forgive? As many as seven times?” 22 Jesus said to him, “Not seven times, but, I tell you, seventy-seven times.

23 “For this reason the kingdom of heaven may be compared to a king who wished to settle accounts with his slaves. 24 When he began the reckoning, one who owed him ten thousand talents was brought to him; 25 and, as he could not pay, his lord ordered him to be sold, together with his wife and children and all his possessions, and payment to be made. 26 So the slave fell on his knees before him, saying, ‘Have patience with me, and I will pay you everything.’ 27 And out of pity for him, the lord of that slave released him and forgave him the debt. 28 But that same slave, as he went out, came upon one of his fellow slaves who owed him a hundred denarii; and seizing him by the throat, he said, ‘Pay what you owe.’ 29 Then his fellow slave fell down and pleaded with him, ‘Have patience with me, and I will pay you.’30 But he refused; then he went and threw him into prison until he would pay the debt. 31 When his fellow slaves saw what had happened, they were greatly distressed, and they went and reported to their lord all that had taken place. 32 Then his lord summoned him and said to him, ‘You wicked slave! I forgave you all that debt because you pleaded with me. 33 Should you not have had mercy on your fellow slave, as I had mercy on you?’ 34 And in anger his lord handed him over to be tortured until he would pay his entire debt. 35 So my heavenly Father will also do to every one of you, if you do not forgive your brother or sister from your heart.”

What is it that you don’t get about being forgiven?  If you’ve been forgiven, then shouldn’t you forgive others?  Doesn’t that make sense?  It would seem appropriate that as a recipient of grace, one would recognize the responsibility to show the same grace to others.  This is especially true if you have been forgiven much, and the person asking for forgiveness owes little in the way of debt or honor.

It makes sense that one who has experienced forgiveness would want to share the same with others, but forgiveness doesn’t come easily.  It doesn’t matter if the person who offended you said something hurtful or killed a loved one.   So, when Peter comes to Jesus and asks him if seven times is sufficient, he was thinking that he was being generous.  To be honest, I sort of agree with him.

Now, to understand what Peter was asking when he came to Jesus, we have to back up a few verses to the previous week’s reading.  Jesus provides the disciples with a means by which a person might be restored to relationship after that relationship had been broken.  What’s interesting about this process is that the one offended is the one who pursues restoration.  We assume, for the most part, that the onus is on the offender to seek reconciliation.  Let the offender come to me and seek my forgiveness.  But that isn’t the way Jesus puts it in his directive (Matthew 18:15-20).

With this as the background, along with the earlier parable about the Lost Sheep, we come to Peter’s question for Jesus.  Is seven times enough?  If I’ve gone through this process of restoration seven times, am I free to say no more to the one who continues to offend?  Jesus tells Peter – no, how about seventy-seven times?  The alternative translation is even larger – seventy times seven, which takes us to 4900 offenses.  Too many to keep track of, and I’m assuming that’s what Jesus had in mind.  Just stop counting, and keep on forgiving.

Before moving to the parable that illustrates why we should forgive, it is important to remember the context of the conversation.  We tend to read texts like this as referring to individuals, but the process of restoration that precedes this text suggests that Jesus and Peter have something else in mind.  Indeed, it is best to read this whole section as referring to the way in which the church lives together.  It would be absurd, though many a pastor has done so, to tell a wife who has experienced domestic violence to just forgive her husband and go back to life as usual.  The recent stories about NFL star running back Ray Rice and his now wife, whom he brutally slugged in an elevator, is a good reminder of the possibilities of violence in individual relationships.  But Peter’s question is set in the context of the church and a process of accountability.  Of course, as I noted last week, we struggle in the modern church with accountability in the church.

The gospel moves from Peter’s question to the Parable of the Unforgiving Servant.   This parable is quite hyperbolic.  It is intended to shock and awe us into recognizing our own sensibilities when it comes to forgiveness.

Like many parables, Jesus begins by referring to the Kingdom of God (heaven in Matthew).   “The kingdom of heaven,” he says, “may be compared to . . . “   When we hear this it’s easy to think that the parable has an eschatological focus and not this worldly one.  In other words, whatever Jesus says here doesn’t apply to the church.  That is, for many of our own age, a good thing, since the church seems to have little value.  It is merely an outmoded institution.  But what if Jesus speaks here not of something forthcoming, but something that exists now – a community of people under the lordship/rule of God through Jesus?

Whether or not the Kingdom of God is larger than the church, whatever applies to the realm of God should apply to the church of Jesus Christ as well, shouldn’t it?   Therefore, whatever the kingdom is, it involves forgiveness and restoration.  In fact, it appears to be a non-negotiable term of participation.  It speaks to the way in which we live our lives in community.  This is important because, as anyone who has experienced community knows, we have a tendency to step on each other’s toes and worse.

Jesus' parable is full of hyperbole.  The contrast between the slave who is forgiven by the king and the slave who seeks forgiveness from the slave who has been forgiven much is quite wide.  The slave who has been called in by the king seemingly owes more than can be repaid in several lifetimes.  Perhaps in this day of easy credit, this doesn’t sound so outlandish, but in the first century, no one could get that far into debt.  So the reader understands – Jesus is making a point.  This servant cannot repay the debt.  It’s too large.  The king decides to get the most out of this servant as he can, so he orders the man and his wife sold, along with their possessions.  At least something can be repaid.  With nothing to lose, the slave begs for compassion.  He asks for patience, so he can pay back what he owes – as if that is possible.  The king is moved to pity, and gives him clemency.  The king simply writes off the debt.  We call this bankruptcy in our day.  He gets start fresh.  There are no claims against him.   This is the gospel message.  It is the message Paul declares in 2 Corinthians 5 – in Christ all things become new.  The old is gone.  This is message of the kingdom.  It is, therefore, also the message of the church.   So, you would think that the man who has been forgiven so much, would want to show the same graciousness to his fellow workers.

I can imagine the man skipping down the steps of the courthouse, shouting praises.  All is good.  That is, until he spots this other slave who owes him but a small amount.  It’s so small that it can be repaid in time.  Perhaps not today, but given a month or two, this slave can scrape together what is needed.  So this slave asks for patience.  Give me a bit of time, and I will repay you everything.  There’s a parallel in the conversations.  We’re expecting the forgiven slave to act in the same way with his fellow slave as he was treated by the king.  But such was not to be the case.  No, the one just forgiven turns on this other slave and demands immediate payment or imprisonment.

Well, as you might expect, this didn’t sit well with the other slaves who had witnessed the forgiveness offered by the king, and so they go to the king and share their concerns.  The king, for his part, is rather put off as well.  So he hauls in the unforgiving slave and demands to know why he has acted in this way:  “Should you not have had mercy on your fellow slave as I had mercy on you?” (vs. 34).

The distressed king, who had chosen to be gracious, finds it impossible to be gracious once more.  You would think, given the exchange with Peter that there would be another opportunity for forgiveness.  But in this case, there isn’t.  This ending can be distressing, especially if the preacher uses it to induce guilt.  But relationships in the church based on guilt or fear don’t go far.  They often turn inward and create dysfunction.  But, could it be that we can be so focused on ourselves that there is no possibility of restoration.  Could it be, in the life of the church, despite Jesus’ numbers, that there are some people who are so destructive to the community that they must be removed?  Perhaps not tortured as in the parable, but still, they simply don’t get it.

Forgiveness, it seems clear enough, is the lifeblood of the community.  Without the community cannot exist.  The Niebuhrian in me (and it grows stronger by the year) won’t allow me to embrace utopian ideals.  There will not be a time, at least in this life, when graciousness and forgiveness are not needed for the church to exist and thrive and minister.  Forgiveness is an ongoing proposition – as is confession of sin!
Email Post
Labels: Church Forgiveness Gospel of Matthew Kingdom of God Lectionary Reconciliation Reflection Sin