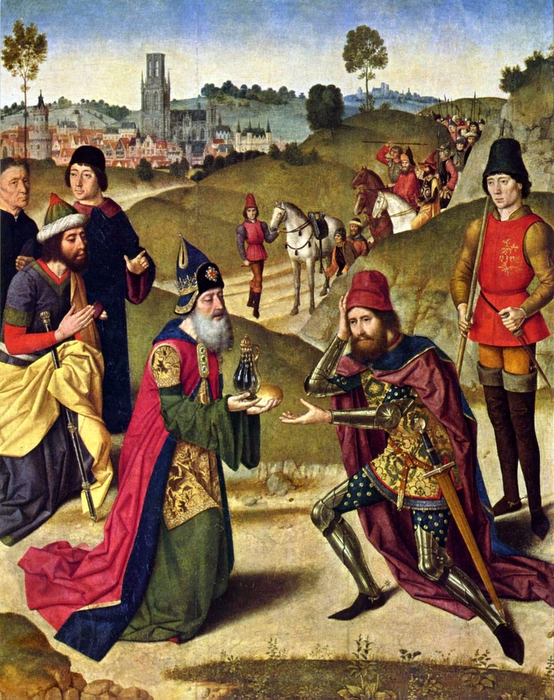 Melchizedek is a mysterious figure. He appears suddenly in the story of Abraham (Genesis 14) and quickly disappears. He is identified as the King of Salem (Jerusalem) and as a priest of God Most High (El Elyon). In this capacity, he blesses Abram in the name of God Most High, Creator of Heaven and Earth (El Elyon) after Abram rescues Lot. Abram, in return, offers a tithe to Melchizedek. And then he’s gone from the story.

We encountered Melchizedek in our Bible Study yesterday, which is focused on the topic of Abraham our Ancestor. Every once in awhile I take up an element of our study for further reflection. So, I pick up the story of Melchizedek here in this reflection.

What is important to note is that Melchizedek is both a king and a priest, and as such he both serves as a ruler over a city and a priest for the local deity, which is El Elyon, the chief god of the Canaanite pantheon. Over time, of course, as Judaism emerged as a monotheistic religion, deities like El Elyon were merged into the identity of Yahweh, the God of Israel. Thus, as Walter Brueggemann notes, over time the “God of Israel usurped the functions of other gods and came to be confessed as the High God of Canaan and all else. The text in its present form certainly means to identify the God who watches over Israel as the God of the universe” [Genesis (Interpretation), p. 136].

Melchizedek appears only once more in the Old Testament and that is in Psalm 110, where the Psalmist, presumably with David in mind (it’s a Davidic Psalm), declares: “The Lord has sworn and will not change his mind, ‘“You are a priest forever according to the order of Melchizedek’” (Ps. 110:4). If applied to David, it would serve to define his monarchy in both secular and sacred terms. He would be priest and king. While this is the only other Old Testament text referring to Melchizedek, the mysterious king of Salem makes a large impact on the Book of Hebrews. I should note that his priesthood proved helpful for Latter Day Saints, who created two priesthoods, one Aaronic, and then a higher priesthood under the name of Melchizedek. I won’t be going into that discussion, but I thought I should make note of it.

The first reference is Hebrews 5:6, which directly quotes from Psalm 110:4 in reference to Jesus’ divine appointment as high priest. This is reaffirmed in verse ten of chapter 5, which notes that Jesus, who is the source of eternal salvation to all who obey him has “been designated by God a high priest according to the order of Melchizedek.” This reference is followed in chapter six with this word: “We have this hope, a sure and steadfast anchor of the soul, a hope that enters the inner shrine behind the curtain, where Jesus, a forerunner on our behalf, has entered, having become a high priest forever according to the order of Melchizedek” (Hebrews 6:19-20).  Then, finally, in chapter 7, the Book ofHebrews draws our attention back to the reference in Genesis 14, noting that Melchizedek of Salem, who is a priest of the Most High God, met Abraham, received a tithe from him, and that Melchizedek’s name means “king of righteousness,” even as he is the king of Salem, or “king of peace.”

When we get to verse 3, we read this intriguing statement that draws on the mysteriousness of Melchizedek’s appearance in Genesis 14:  “Without father, without mother, without genealogy, having neither beginning of days nor end of life, but resembling the Son of God, he remains a priest forever.” As the passage moves forward, the author takes note that this person who resembles the Son of God and remains a priest forever is greater than Abraham, since Abraham offers to him a tenth of his spoils. Of course, part of the deal here is that the author of Hebrews is trying to define a form of priesthood that could go to Jesus, that isn’t tied to the Levitical priesthood, and which could, in the mind of the author, allow Jesus to supersede Judaism. This is a good example of the dangers that are present in the New Testament that lead to supersessionism, which then leads to anti-Judaism among Christians. Not wanting to go that route, we need to be careful about how we read these stories.

As you can see, the mysteriousness of Melchizedek’s origins provides a useful foundation for envisioning a priesthood for Jesus, who like David is not from a priestly family (though according to Luke, Mary’s cousin Elizabeth’s husband is a priest and thus a member of the Levitical tribe).   Thus, Origen can write of Jesus’ priesthood, following Hebrews: “But to this we reply that the Apostle clearly defined his meaning, and declared the prophet to have said about the Christ, “Thou art a priest for ever, according to the order of Melchisedek,” and not according to the order of Aaron.  We say accordingly that men can be high-priests according to the order of Aaron, but according to the order of Melchisedek only the Christ of God.” [Origen in AnteNicene Fathers,  https://www.ccel.org/ccel/schaff/anf09.xv.iii.i.iii.html#_Ps_10_4_0_0;_Heb_5_6_0_0]. Intriguingly, this mysterious figure could become the foundation upon which to build an element of a Christology that would envision Jesus not only as a king but as a priest whose own life is offered up as a sacrificial offering for the salvation of humanity.

I offer this up simply because I find this story of Melchizedek and how it lends itself to later use fascinating. Though, as I noted, it can prove dangerous if read in a supersessionist mode. So, who is this mysterious Melchizedek?