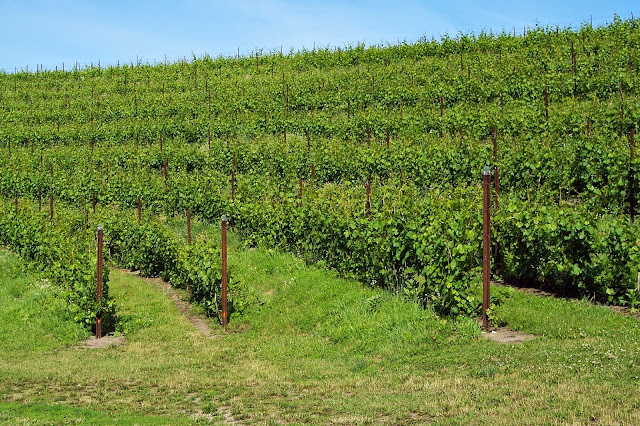 20 “For the kingdom of heaven is like a landowner who went out early in the morning to hire laborers for his vineyard. 2 After agreeing with the laborers for the usual daily wage, he sent them into his vineyard. 3 When he went out about nine o’clock, he saw others standing idle in the marketplace; 4 and he said to them, ‘You also go into the vineyard, and I will pay you whatever is right.’ So they went. 5 When he went out again about noon and about three o’clock, he did the same. 6 And about five o’clock he went out and found others standing around; and he said to them, ‘Why are you standing here idle all day?’ 7 They said to him, ‘Because no one has hired us.’ He said to them, ‘You also go into the vineyard.’ 8 When evening came, the owner of the vineyard said to his manager, ‘Call the laborers and give them their pay, beginning with the last and then going to the first.’ 9 When those hired about five o’clock came, each of them received the usual daily wage. 10 Now when the first came, they thought they would receive more; but each of them also received the usual daily wage. 11 And when they received it, they grumbled against the landowner, 12 saying, ‘These last worked only one hour, and you have made them equal to us who have borne the burden of the day and the scorching heat.’ 13 But he replied to one of them, ‘Friend, I am doing you no wrong; did you not agree with me for the usual daily wage? 14 Take what belongs to you and go; I choose to give to this last the same as I give to you. 15 Am I not allowed to do what I choose with what belongs to me? Or are you envious because I am generous?’ 16 So the last will be first, and the first will be last.”

What does the Kingdom of God (heaven) look like?  What are its marks?  Is it a spiritual entity?  Is it something that will emerge in another age, but not now?  Is the church an expression of the kingdom?  We hear a lot these days that Jesus didn’t come to establish the church, but rather the kingdom of God.  The church is therefore the poor imitation of the real thing.  Jesus speaks regularly of the kingdom – the basilea theou – usually in the form of parables.  Parables by their design both reveal and hide.  Parables are also culturally defined.  That is, they are rooted in the culture of the original audience.  We must therefore translate not only the words but the meaning if we’re to understand its message for today.

A traditional way of reading the passage is to think in terms of salvation.  It doesn’t matter when you come to faith, even on your death bed; the heavenly reward is the same.  How can we who have been Christians all our lives complain that death bed converts get what we get?  After all, salvation is a gift of God and not something we earn.   But is Jesus talking here about salvation?

If we look at the parable in economic terms, the dissonance is more present.  Shouldn’t pay be based on the work done?  The more you work, the more you should be paid.  In a capitalist system like ours, even if it is a regulated form, we assume that this is the way things should work.  Not only that, we assume that the higher you rise in rank the higher your pay.  That just seems like the right thing to do.  So built into the system, both private and public, are pay grades.  Even clergy fit into this scheme.  The more education, the longer you’ve served, the larger the congregation, the more you should earn.  Truth be told, one of the reasons why some clergy pursue a doctor of ministry degrees is so that they can command a higher salary.  That’s not true of all, but it is true of some.  This is just the way it is supposed to be – except not in the kingdom of heaven.

It would seem that in this parable, Jesus is laying out a vision in which the people of God should expect to live in a context of radical equality.  Everyone gets paid the same, no matter much labor is put in.  The point is not a reward for work, but sustenance for life.  Charles Campbell points us to the story of God’s provision of manna in the wilderness (Exodus 16 – the passage I’m preaching from this week), suggesting that it provides a lens by which we can interpret this parable.  He speaks of God creating a new people – in both cases – “who will embody an alternative to the ways of Egypt, the ways of domination and submission, rich and poor, powerful and powerless.”  The provision of God – the manna – is not fancy or special.  It is simply the provision of what is needed to survive.  It is subsistence living.  It is what we pray for in the Lord’s Prayer – “our daily bread” [Campbell in Feasting on the Word, Year A,: Season After Pentecost 2 (Propers 17-reign of Christ), p. 93].  It’s not the new Cadillac or the new iPhone – it’s basic sustenance, that’s what God provides.

At issue here is the nature of our relationships as the people of God.  What are the expectations?  Are we competing for fame and fortune, superiority, and status?  And where should we begin to see this vision expressed?

While I am struggling with parts of his presentation, I believe that Scot McKnight is correct to point to the church.  It is the church as a local body that this vision can begin to take shape.  Now, it has rarely been tried.  We can see some evidence in Acts 2 and 4, but how long did this experiment last and did it emerge elsewhere?  There’s no evidence from Paul’s letters that the churches he founded or had contact with practiced radical equality.  But if we are to embody the kingdom principles espoused here, should that not start with the church?

As we ponder the nature of the kingdom and the church, which the kingdom in my mind encompasses (even if it is larger than the church), it is appropriate that we continue to ponder the nature of society.  What vision does Jesus offer us of what is fair and just?  Is it simply a matter of the worker deserves his or her wages based on work done, or is the purpose of labor to provide basic sustenance for one’s self and family?  Justo and Catherine Gonzalez point us to the plight of day laborers in our own context – having lived in California I’ve seen day laborers line up at a corner waiting to be chosen to do construction or landscaping work.  Those who get chosen early in the day are fortunate, but what about those who seek work, but are given no opportunity?  Should they not have the opportunity to gain the ability to provide for themselves and their families?  The Gonzalez’s remind us that “those who live with the security of employment need to feel the fear of those who lack such security.  In a bad economy, even those who once felt secure may begin to feel sympathy for those who have lived year after year with such fear” [Preaching God's Transforming Justice: A Lectionary Commentary, Year A, p. 402].

However, we choose to read the parable, whether spiritually or economically, the word we hear in this passage is that in the kingdom of heaven, the king is generous.  The king provides sustenance.  It is not based on merit but on grace.  Yes, the vineyard owner declares:  “Am I not allowed to do what I choose with what belongs to me? Or are you envious because I am generous?’ (vs. 15).  If the vineyard owners stands in for God, then should we not follow the lead and live lives of generosity and grace?  When we see a person in need, should we not welcome opportunities to provide for their needs?  Yes, Paul does say that if one does not work, they should not eat.  But the contexts are different.  In Thessaloniki, some Christians were abandoning their work to wait for the return of Christ.  (2 Thessalonians 3:6-13).  They were expecting others to provide their needs so they wouldn’t miss seeing Jesus come back.  In this case, people are looking for work, but can’t find it.  Shouldn’t they have the opportunity to be filled?  What is just and what is right?  What is God’s attitude toward those who are in need?  Is God not generous and gracious?
Email Post
Labels: Fairness Generosity God the Sustainer Gospel of Matthew Grace justice Kingdom of God Lectionary Pentecost Season