Walking Humbly with Jesus -- Lectionary Reflection for Pentecost 17A (Philippians 2) 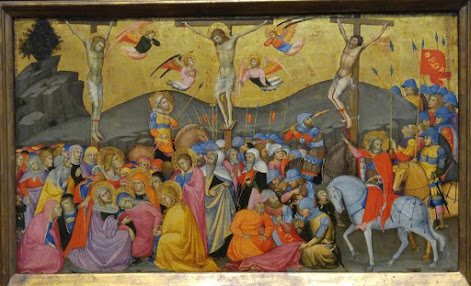 2 If then there is any encouragement in Christ, any consolation from love, any sharing in the Spirit, any compassion and sympathy, 2 make my joy complete: be of the same mind, having the same love, being in full accord and of one mind. 3 Do nothing from selfish ambition or conceit, but in humility regard others as better than yourselves. 4 Let each of you look not to your own interests, but to the interests of others. 5 Let the same mind be in you that was in Christ Jesus,

6 who, though he was in the form of God,
did not regard equality with God
as something to be exploited,
7 but emptied himself,
taking the form of a slave,
being born in human likeness.
And being found in human form,
8     he humbled himself
and became obedient to the point of death—
even death on a cross.

9 Therefore God also highly exalted him
and gave him the name
that is above every name,
10 so that at the name of Jesus
every knee should bend,
in heaven and on earth and under the earth,
11 and every tongue should confess
that Jesus Christ is Lord,
to the glory of God the Father.

12 Therefore, my beloved, just as you have always obeyed me, not only in my presence but much more now in my absence, work out your own salvation with fear and trembling; 13 for it is God who is at work in you, enabling you both to will and to work for his good pleasure.

As we open chapter two of Paul’s letter the Philippians, what find is a continuation of a thread that begins in verse twenty-seven of chapter one, in which Paul tells his readers to live their lives in a manner worthy of the Gospel. He asked them to stand firm in one spirit and strive together in one mind for the gospel (Phil. 1:27). Now, he takes this word of guidance a step further by offering Jesus as our example of what it means to live a life worthy of the Gospel. In pointing our attention toward Jesus, he calls on the congregation to live humbly. He asks them not to consider themselves better than others. In fact, they should do nothing from selfish conceit. If they follow this word of guidance, they’ll make Paul’s joy complete. By following the example of Jesus they’ll be of the same mind, have the same love, and be in full accord. It is a call to unity in the Spirit of Christ that requires walking humbly with Jesus. This is expressed by looking after the interests of others, rather one’s own.

While we don’t see the same kind of conflict present in this letter as some of the others, there are hints that the community might not always be on the same page. Perhaps it’s due to persecution or some other matter. Later in the letter, Paul refers to Euodia and Syntyche, who are being urged to be of one mind. Paul asks his companion (perhaps the bearer of the letter) to help these women whom Paul acknowledges as having struggled alongside him for the gospel (Phil. 4:2-3). While Paul does give an explicit explanation, the original readers understand. What we do know is that Paul offers Jesus as the model for the Christian life, and that model is one of humility and even self-sacrifice.

Just a caveat here. It’s possible to take this too far and not consider one’s own welfare. We need to set boundaries so that we don’t get abused by others. Now, Paul might not agree with that caveat, but we’ve learned the need for a bit of balance lest we burn out or get run over. That being said, we can hear Paul’s word concerning a way of life that imitates Jesus, a word that he inhabits in his imprisonment due to his work on behalf of Jesus.

Standing at the center of the passage is a hymn, or what looks like a hymn, since most translations lay it out in hymnic form. It’s possible Paul wrote it, but it’s more likely that it’s a well-known hymn in the circles of Paul’s churches. It’s a bit like me quoting from a hymn like "Amazing Grace," which the congregation will know and love and be able to understand its meaning.

The initial vision presented by the hymn is kenotic. It envisions Jesus being in some form divine, and seemingly pre-existent (this would fit with John’s prologue—John 1:1-14). Nevertheless, despite his original form, he doesn’t exploit this equality with God. Instead, he humbles himself, taking on the form of a human, even that of a slave. That is, Paul envisions Jesus taking the lowest form in society, and from that form revealing God’s vision of salvation. There would be exaltation, but first, there must be the act of taking on human form and identifying with the lowliest members of society. This act of identification with humanity is understood to be an act of obedience that would take him to the cross.

I refer here to the theological word “kenosis” because it is pregnant with meaning. It speaks of emptying oneself of one’s prerogatives, glory, and even divine status. It gives room for divine-human interaction, and in this case for our salvation. Karl Barth suggests that in this act of emptying of himself of his divine glory, Jesus “puts himself in a position where only he himself knows himself in the way that the Father knows him.” Any act of revelation will come from the Father. [Epistle to the Philippians, 63]. The message here to the Philippians is this: If Jesus was in a position of equality with God the Father, and he let go of it so that he might experience human life even to the point of suffering death on a cross, then shouldn’t they be willing to follow suit?

Of course, this is not the end of the story. What occurs in the first verse of the hymn, the humiliation of Jesus, is reversed in the second verse of the hymn (vs. 9-11), wherein God exalts Jesus by raising him from the dead and seating him at the right hand of God. As he ascends to this exalted status, every knee bends before him and every tongue confesses that he is lord. All of this is to the glory of God, from whom he descended and then ascended. Jesus is exalted, but he doesn’t exalt himself. The same true for us.

While this passage doesn’t provide us a fully developed trinitarian vision, since such a vision can’t be found in the New Testament, you can see the foundations of such a vision here. While, unlike in John’s prologue, there isn’t a reference to the logos here, the hymn may presuppose some form of preexistence, that later theologians could build upon. But Paul isn’t so much interested in laying out a theological argument on the divine nature of Jesus as he is attempting to provide a foundation for living the Christian life in a way that reflects the person of Jesus who was willing to sacrifice all for others, a sacrifice that led to his exaltation through the resurrection. In other words, leave the work of exaltation to God!

If we take Jesus, who though having equality God, thought it not necessary to hold onto, but emptied himself of that glory, taking on human life, then surely we can follow his example in our lives. As we do, we can work out our salvation with fear and trembling, knowing that it’s God who is at work in us, enabling us to “work for his good pleasure.”
Email Post
Labels: Christian Living humility Karl Barth Kenosis Lectonary Pentecost Season Philippians Reflections Trinity