I want to spend a bit more time on the first aftershock to the 1960s reaction to the 1950s religiosity.  Robert Putnam and David Campbell, in their book, American Grace

, have gone into some detail exploring the rise of evangelicalism in the 1970s and 1980s, a period in which the nation itself saw a conservative reaction to the more liberal 1960s.  They note the usual explanations, including higher birth rates and retention, as well as the possibility of converts.
They note that conversion rates to evangelicalism rose signficantly during this period, with 1/3 of evangelicals today not being raised in evangelical homes.  They have also not suffered as much from intergenerational loss as Mainline and Catholic Churches (Catholic stability is the result of immigration, especially Hispanic immigration).  They note that as late as the 1960s, evangelical churches tended to lose some among their younger generations to Mainline churches as they rose into the middle class -- trading Baptist for Episcopal, even as they traded Chevy for Buick.  But in this period educated young adults stayed home.
As they explore the demographics, they note that the studies suggest that the nation may have, during this period began to move in a rightward direction.  And if you look around, you'll find much evidence to support this -- especially for those who are forty years and older.  Although there are younger people in the Tea Party ranks, if you look closely the majority are 50 plus.  I think if you check, Fox News does best among the same demographic. Oh, and the demographics for Sarah Palin's Alaska series -- the median age for week 2 was 57 years old, 15 years older than the typical TLC audience. 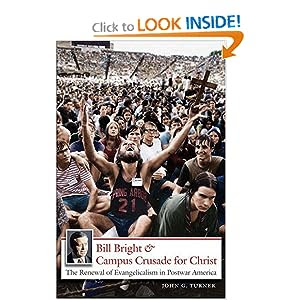 But, back to the period of the 1970s and 1980s when a conservative aftershock was first being felt (when I was just coming of age).  It doesn't seem as if this change was just theologically driven, as affirmations of biblical literalism have declined through this entire period.  Part of the answer may be simpler than you'd think -- "greater organizational energy and inventiveness" (p. 113).  Why have conservative evangelicals thrived?  It's not necessarily their theology or even their politics, but their entrepreneurial spirit -- their inventiveness -- contemporary music, worship, etc.  Going back to the 1970s, while mainline churches continued to affirm traditional liturgy and music (with the brief exception of folk mass forays), evangelicals embraced contemporary Christian music.  Jesus music proliferated.  They also made better use of small groups and of course they built churches in the suburbs and along freeways.  Oh, and they were strongly present on college campuses -- Campus Crusade for Christ, Navigators, and InterVarsity all being good examples -- while mainline campus ministries went into steep decline.
Still, the authors don't think this is the final explanation for the growing influence of conservative evangelicalism.  They suggest that the answer might be found in a Pauline injunction to "stand firm."

This was an age of turmoil that many Americans found deeply repugnant to their fundamental moral and religious views.  Other trumpets might be uncertain, but evangelical trumpets were not.  Evangelicals were prepared to heed Paul's advice and stand up for their values.  (American Grace

Even as Mainline churches expressed uncertainty in the face of change -- they seemed to cling to traditional liturgy and structures, while allowing more diversity in theology and moral practice, evangelicals seemed to stay true to traditional theology and values (even if they did so with new liturgical forms).  Consider:

Evangelicals' distinctive moral outlook, inherited from their fundamentalist forebears, is dark and somewhat puritanical (or Victorian).  They share a view of the world as sinful and of God as a harsh judge.  For them, heaven, hell and judgment day are realities, not metaphors, and moral issues are framed in absolute, black-and-white terms.  (American Grace, p. 113-114).

And after the 1960s, this firmness of conviction seemed attractive to many, including to many younger adults who came of age at about the same time I did.
I wanted to dig a bit deeper into this reaction, because it sets up a major aftershock to the first aftershock, and it helps explain why younger adults are fleeing churches today, whether conservative or liberal.  So, on to part 4!
American Grace Campus Ministry David Campbell Evangelicalism Generational Change Moral Majority Religious Conservatives Robert Putnam