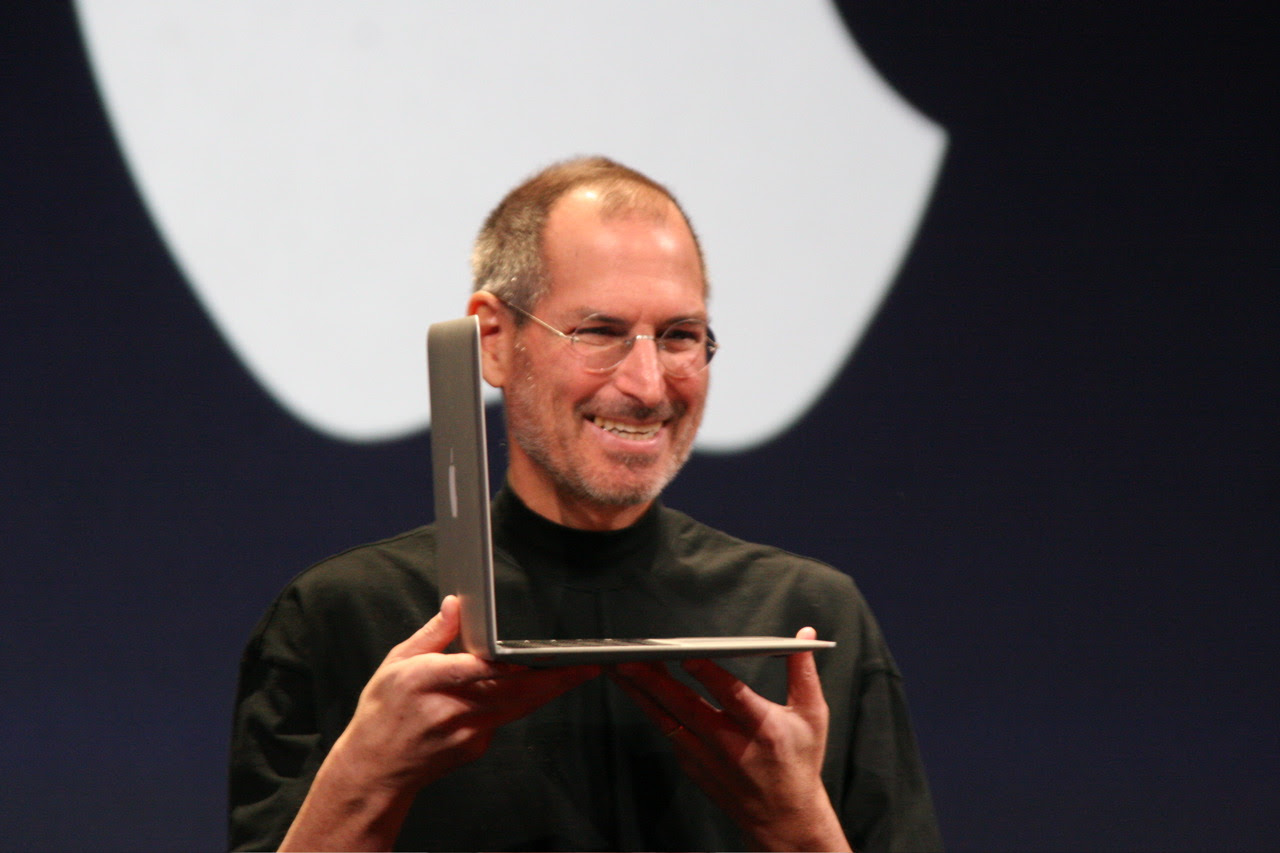 I don't want to make light of the death of Steve Jobs.  I am, after all, a pastor and I am charged with helping people deal with grief, and we all grieve differently and for different reasons.  Still, I've been  a bit bemused by the outpouring of grief for Steve Jobs, much of it coming from progressive/liberal types, and shared on Facebook.  Many of these folks are close friends of mine.  Although I expect that none of my friends knew Jobs personally, they seem to be taken by his passing in ways that might seem unexpected.  Indeed, some of the responses have seemed akin to raising Jobs for sainthood, suggesting perhaps that the waiting period be waved so he can join John Paul II on the fast track, or at the very least a moral/spiritual exemplar.
Part of my puzzlement probably stems from the fact that I’m a “PC” guy.  I’ve never owned an Apple product, and the ones I’ve used have been those at my wife’s former school.  Using the Mac I never saw why it was so great.  I confess this not to dis Apple, just to note that whatever ways Steve Jobs touched my life, it likely occurred indirectly.

But what is it about Jobs that has gotten so many people’s attention, especially at a time when folks are either Occupying Wall Street or celebrating those who have.   At least some of the protesters are protesting corporate greed.  So, how is Jobs different from other corporate folks, including Gates and Microsoft?

From what I’ve read, Jobs wasn’t a philanthropist like Bill Gates.  There are no foundations being set up to cure cancer or solve the ongoing problem of poverty.  When invited by Gates and Buffett to join them in giving 50% of their earnings to philanthropy he apparently declined.  Now, he could have given anonymously, but that rarely happens.  So, what we do know is that he poured his energies into his company.   Indeed, he apparently was a creative genius, and Richard Kauffman of the Christian Century may be correct in suggesting that Jobs may be the last of the great creative geniuses.    Jobs, like Gates, is a Baby Boomer – he was just a few years older than me, a reminder of my own creeping mortality.   Richard may also be correct that the future of inventiveness may be determined by steps taken now to create an environment where such genius can flow.  But is this grief more a part of our own addiction to technology, something many bemoan even as they celebrate the benefits.

So, for a PC guy like me, the question then is – how is Jobs different?  Why does he deserve such lionization at his death?  If, as Richard suggests, Jobs devoted his attention to the common good, how does a better I-Pad or I-Phone make the world a better place?  And would this not have happened with a Google or some other similar company?   I eagerly await your responses!
Email Post
Labels: Common Good Corporations Grief Legacy Occupy Wall Street philantropy Sainthood Spirituality Steve Jobs Technology

Brian said…
A Barthian PC man from Fuller:Heaven help us!
8:03 AM

John said…
Quite simply, the perception is that Steve Jobs exemplified the American mythos: a self-made man who managed to overcome all obstacles and through genius and hard work to successfully develop and market ideas and high quality goods in a unique way and in a way that captured the American imagination and transformed the way we live.

He is not the last exemplar, just the most recent.

And not sainthood, he was not nearly so benevolent, but in the American enterprise hall of fame, along with Benjamin Franklin, Thomas Jefferson, Thomas Edison, the Wright Brothers,and Henry Ford.
8:26 AM

Aric Clark said…
Not to rain on anyone's parade. People have a right to grieve in their own way, but Steve Jobs is in no way deserving of being lifted up as a moral exemplar. As alternative perspectives I offer this article about his bullying behavior and this Gawker piece putting things in perspective.

It's also past time we put the whole myth of the self-made "great" man to rest as well. To quote Henry Ford:

"I invented nothing new. I simply assembled the discoveries of other men behind whom were centuries of work. Had I worked fifty or ten or even five years before, I would have failed. So it is with every new thing. Progress happens when all the factors that make for it are ready and then it is inevitable. To teach that a comparatively few men are responsible for the greatest forward steps of mankind is the worst sort of nonsense."

For more on the genesis of ideas, in particular how Apple borrowed and stole other people's ideas just like everyone else check out Everything is a Remix. All 3 episodes of that show are well worth a watch.
10:43 AM

Brian said…
I can honestly say that I've never heard anybody lift Steve Jobs up as a moral exemplar. I like his products. I am inspired by his creativity. He did bad things too. I don't want to gloss over them, but right now is not the time.

Love and admiration are not based on reason and evidence.
10:58 AM

I think I'm reacting to this sentiment that folks have lost this dear intimate friend in Steve Jobs. But, the only way the interacted with him was through the devices that Apple created and sold.

I must also admit that I used the title to get people's attention, to see what they might say about him with a bit of thought.

Like I said, I'm a PC user and am satisfied with the ones I've used. Bill Gates isn't a saint, though he seems committed to using his money to attend to those in need. Will we grieve at his death at the loss of the founder of Microsoft -- probably not.
11:12 AM

John said…
If you look into the lives of any of the individuals I lifted up, you will see that each of them were in many ways deeply flawed, even despicable. What separates them from the crowd is not that they came up with transformative ideas out of whole cloth, but that they each came out of nowhere and seized the moment, at the right time, with the right ideas, and changed lives around the world, for the better. Though some might argue with whether or not such changes were indeed for the better.

Not saints, not even close. But it cannot be denied that many if not most Americans hare a myth about who we are, and these men approximate this mythic posture like few others.

I agree with Bob's puzzlement about how so many people could mourn his passing as if he were an intimate friend.
11:28 AM

David said…
We mourn because we realize we're going to die no matter how successful and powerful we become- even if we own the wealth and power though our own creations.

My take on Steve the man is, he was a bright guy with "things" but wasn't too considerate with people.

He's only a year older than I, so I can relate in that regard.

Bob, the very first computer you operated- was not a Macintosh?

I hope his family is not cursed by his horded wealth.
11:06 PM

Brian said…
People feel connected to celebrities. I was sad when John Lennon was killed as if he were my personal friend. (I still am.) People mourned in the streets when Rudolph Valentino died. Remember when Michael Jackson or Princess Diana died?

Bob, I'm not trying to be critical. I just don't see how this is different. He did touch many lives with his gifts to the world. Yes, there are bad things, but it would be ungentlemanly to discuss them at this time.

A public figure died. People express sorrow. I honestly do not see the issue.
7:32 AM

No, the first computer I ever touched wasn't a Mac, but an IBM clone!

Brian, the point of the post was to ask why the fuss? I appreciate your take. Thanks!
8:34 AM