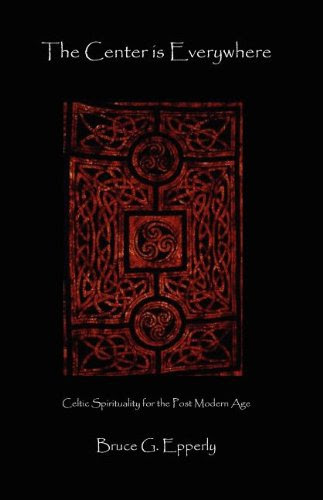 Today Bruce Epperly begins a new series of postings that are based on his recently published book on Celtic spirituality.  In this first posting he suggests that we would benefit greatly from attending to Celtic spirituality and theology.  Because much of our western Christianity has been influenced by St. Augustine of Hippo, he asks the question -- what if Pelegius, one of Augustine's arch-nemeses, had either been declared the orthodox one or Pelegius had at the very least been acknowledged as offering his own unique take on the faith?  Well, stay tuned for Bruce's ponderings.

Christian faith is multi-faceted and complex.  Although the life and teachings of Jesus are at the heart of Christianity, over the past two thousand years Christians have articulated scores of “orthodox” understandings of God’s purposes and the focus of Jesus’ mission, many of which claim to accurately – or most accurately - represent the ancient faith handed down by the apostles.  Until the last twenty years, Celtic spirituality and theological reflection has been at the periphery of Christian thought.  Tainted by false accusations against Celtic theologian Pelagius, Celtic spirituality has been dismissed as works righteousness and nature-centered in contrast to the more “orthodox” dualisms of sin and grace and God and nature.  Affirmations of human goodness and agency –as well as reverence for embodiment and the non-human world, were considered contrary to the one true faith, articulated by those who believed themselves to be faithful interpreters of the tradition of Paul, Augustine, Calvin, and Luther.

The guardians of “orthodoxy” believed that the heart of early Christianity could be described in terms of the doctrines of original sin, human depravity, coercive grace, divine transcendence, and eternal damnation.  Any human agency was considered prideful rebellion against irresistible, yet limited grace.  Left to our own devices, we are by nature self-centered and narcissistic, and loved in spite of who we are.  Accordingly the Celts and their spiritual children were dismissed as heretical nature worshippers and grace deniers.  The worst thing you could call a theological position – the best way to dismiss anything that affirmed human beauty and goodness – was to call it Pelagian!

Today, Pelagius has been rediscovered as the yin to Augustine’s yang!  Knowing the contingencies of history and Augustine’s circuitous path to declaring Pelagius a heretic, many are asking the “what if” questions of theological history:  “What if Augustine and not Pelagius had been chosen as the bearer of orthodoxy?  What if Western Christianity had affirmed both the Augustian and Pelagian streams of theology as significant interpretations of the faith?  What if goodness, beauty, and creativity had been deemed as important as depravity, sin, and pride in understanding the human condition?”  While we can’t answer these questions fully, I believe that a holistic faith needs the insights of the Celtic vision of human life and spiritual formation.

In the next several weeks, I will be reflecting on the gifts of Celtic spirituality for the transformation of Christianity and the healing of the world.  Many of these insights are found in my recent book, The Center is Everywhere: Celtic Spirituality for the Postmodern Age.  I am also grateful to John Philip Newell for sharing his vision of Celtic Christianity to a new generation of Christians and seekers.  Newell’s latest book A New Harmony is a gem.

Today, Christianity needs the Celtic vision to respond creatively to the seekers both within and beyond the church and to inspire Christians to become God’s partners in healing the earth.   I believe Celtic spirituality, along with process theology, provides a lively foundation for an emerging, missional Christianity.  In what follows, I will present a number of key Celtic affirmations to be discussed in greater detail in the weeks ahead.  The Celtic vision affirms:


Green and alive, Celtic spirituality invites us to celebrate this good earth and claim our role as God’s companions, blessed by grace and called to action to heal the earth.

Bruce Epperly is a theologian, spiritual guide, pastor, and author of twenty one books, including Process Theology: A Guideto the Perplexed, Holy Adventure: 41 Days of Audacious Living,  Philippians: An Interactive Bible Study, and The Center is Everywhere: Celtic Spirituality for the Postmodern Age.  He may be reached at drbruceepperly@aol.com for lectures, workshops, and retreats.
Email Post
Labels: Bruce Epperly Celtic Spirituality Guest Posts John Philip Newell Pelegius Process Theology Spirituality

Brian said…
Thank you Bruce. This is beautiful.