Reading the Bible for All the Wrong Reasons -- Review 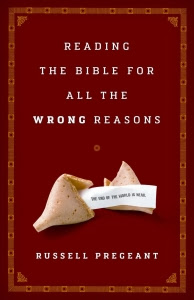 In a book, the title of which is a riff on the old Country Western song “Looking for Love in all the Wrong Places,” Russell Pregeant offers a reminder that the biblical text may be a book revered by people of faith, but if it is to be understood it must be interpreted.  Interpretation must be done carefully and skillfully, which means that the reader of scripture is best served by not asking it to answer questions that it isn’t meant to answer or to provide support for causes that run counter to its message. Therefore, as Pregeant writes “it is important when approaching the Bible to consider the nature of the biblical writings and to ask questions appropriate to that nature.  Much of our confusion about the Bible stems from the inappropriate questions many interpreters ask of it, and the result is a phenomenon I call ‘Bible Abuse’” (pp. 5-6).   This is, in essence, a call to refrain from abusing the Bible by using it inappropriately, which includes using it in ways that abuse others.

The author of this brief and readable book is a United Methodist minister, Professor of Religion Emeritus at Curry College (Massachusetts), and a Visiting Professor of New Testament at Andover Newton Theological Seminary.   He is the author of a number of texts in the area of  biblical studies, including a commentary on Revelation.  As is true of all of us, he comes to this task with a particular theological perspective, his being informed by Process Theology.  Although Pregeant doesn’t name it, if you know Process Theology you’ll see its influence in the way that he reads and interprets the text.

The book is composed of seven chapters, the first two look at perspective and authority, while chapters three and four look at two areas of particular concern – Bible and Science and Biblical prophecy.  These are two key areas where “biblical abuse” is a particular concern.  Chapter five looks at biblical ethics, chapter six examines the Bible and Christian doctrine, and in chapter seven he looks at the role of the Bible in Christian life more broadly.  In an epilogue he comments on the “Biblical witness and the Word of God.”  With regard to that relationship Pregeant writes that “from a Christian perspective it is truer to the biblical witness to say the Bible is the potential vehicle of God’s word.”  That is, it can mediate to us God’s presence, but only as we allow the Spirit to speak through these writings to “make us into a new creation” (p. 130).  One, therefore doesn’t simply read the Word, one must receive it as the Spirit speaks through it in a way that is transformative of the person and leading to the reign of God in our world.
It may not surprise many readers of this book that the author chooses to focus attention on science and apocalypticism.   With the exception of social issues – marriage and abortion – these two areas have been the locus of debate as to the nature of biblical literalism and interpretation.  With regard to science, the primary question today for many readers of the bible is whether the Genesis accounts of creation, including the creation of the first humans (Adam and Eve) must be seen as scientific and historical fact.  That this debate continues one hundred and fifty years after the publication of Darwin’s Origin of the Species may seem odd to some, but it has become even more polarizing today than at any other time since at least the least the 1920s. Increasing numbers of Americans are rejecting evolution in favor of some form biblical creationism, despite the evidence in support of this foundational scientific theory.  But, for many when forced to choose, they’ll choose creationism.  This has had important implications, including the increasing disdain for such scientific areas of concern as climate change.  But what if the point of Genesis isn’t either history or science, but rather the ongoing story of redemption? And the point of the creation story is that this world in which we live has been declared good.  From these stories we learn from a prescientific perspective the source of values and meaning, but to read it as modern science is to misread it and thus to abuse it.

As for apocalyptic readings, Pregeant writes that biblical prophecy is “neither crystal ball nor horror show” (p.  51).  Pregeant, like other biblical scholars such as Barbara Rossing, make it clear that dispensationalism, which is the basis of “rapture theology” is not just bad theology, but bad biblical interpretation.  It rests on ideas that are foreign to the text of scripture and thus misread it.  He writes that “the rapture is a bogus doctrine with no legitimate basis in Scripture.  In fact, the dispensationalists claim that the ‘end is near’ contradicts the Gospel sayings in which Jesus states that no one but God knows the time of the end (Mark 13:32) and denies that God’s rule will be accompanied by observable signs (Luke 17:20)” (pp. 54-55).   It should be noted, however, that Paul does seem to believe that the end was near, but by the time that the Gospels are written that sensibility seems to have given way to a more patient expectation of the future.  Dispensationalism, however, tends to solve the problem by channeling it two millennia into the future.  What this doctrine has done, however,  is scare people and undermine attempts to save the planet.  Remember the famous testimony of James Watt, Ronald Reagan’s Interior Secretary, who suggested that there was no need to plan for the ecological future since Jesus was coming back soon?  It also provides dangerous support for those who would undermine efforts to bring peace in the Middle East.  Christian Zionism is deeply connected with this view of scripture.

These are only two of the issues that the author takes up.  He deals with ethics and doctrine and the Christian life, offering wisdom as to how one might read effectively and responsibly these texts.  Even if one doesn’t agree at all points, it is a worthwhile read.  This is true even when, as with his attempt to explore economics from a biblical perspective, he may have at points stepped over the lines he has drawn for his more conservative interlocutors.  But, if he does stray across the line, it isn’t that egregious and one may judge his interpretation against the standards he sets for others.

This is a good book, especially for educated lay readers of scripture.  It offers wisdom and insight and principles of interpretation, while engaging important issues of the day.  I wish that the publisher had provided wider margins as the book seems cluttered in presentation.  I do like the use of fortune cookies to create sidebars, however.  Perhaps, having read the book we’ll be able to more wisely read the Bible for all the Right Reasons!

Gary said…
Don't waste your time. The author is as big an infidel as is Cornwall. You'd be better off flying a kite or looking at the moon than reading this book.

And based on my comments, some of you will rush out and buy it.
8:02 AM

Brian said…
* Thanks for the review Bob. Is this written so non-seminarians can enjoy it? I'm going to share this review on my facebook page in the near future.

* "That this debate continues one hundred and fifty years after the publication of Darwin’s Origin of the Species may seem odd to some,".

I don't find it odd. I see it as lack of moral character in the Church to help every day people to understand what pastors have known for at least 100 years.

Robert Cornwall said…
Gary, your reverse recommendation may work wonders. You can buy a copy through my Amazon store!

Brian, yes this is written for non-seminarians.