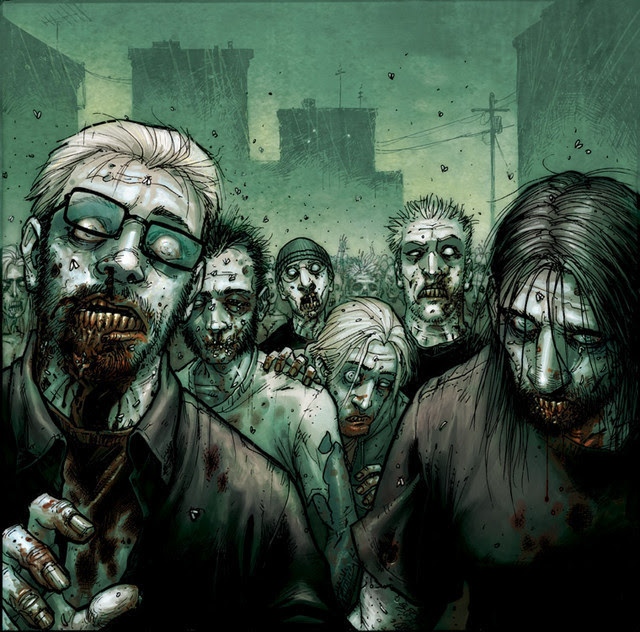 With Halloween around the corner, zombie movies on the screen, and Occupy Movement folks dressed as zombies, I suppose it would be a good time for us to post a piece on zombies that calls for some theological reflection.  Although I've not done much thinking about zombies, Jessica DeCou, a doctoral candidate at the University of Chicago Divinity School, has and so in this posting she takes us into the world of the Undead and asks some important questions about community and relationship.  Have a read and offer your thoughts on the Zombie Pandemic.
**********************

You may have seen them around—more and more lately—and they will soon swarm the streets in a three day Zombie Apocalypse scheduled to begin October 29 in more than 400 cities. Zombies are everywhere. Books like Pride and Prejudice and Zombies and The Zombie Survival Guide have become perennial entries on the New York TimesBest Sellers list. And, last Sunday, the second season of The Walking Dead premiered to record-breaking numbers, becoming the highest rated drama telecast in the history of basic cable. The contagion has spread so rapidly that even the Centers for Disease Control is getting in on the action. Recognizing that “if you prepare for the zombie apocalypse, you'll be prepared for all hazards,” says one CDC spokesman, the organization outlined a zombie preparedness plan and confirmed its readiness to provide “lab testing and analysis, patient management and care, tracking of contacts, and infection control (including isolation and quarantine)” in the event of a zombie pandemic. On May 16, 2010, the day the CDC posted this page, an unprecedented volume of traffic crashed the website. So what can we learn as scholars, theologians, clergy, or citizens in a society with zombies on the brain?

Research from Oxford University suggests that, in spite of the presence of zombie figures in folklore around the world, this recent surge in popularity is mostly concentrated in the U.S., Europe, and Japan. Zombies are a first world problem. They are typically a result of first world hubris—bio-weapons, nuclear radiation, corporate greed, big pharma, etc. Accordingly, scholars have offered various hypotheses as to what this particular species of undead represents—e.g., anxieties about consumerism, conformism, race, and sexuality. A range of theological interpretations are possible as well: perhaps in terms of “the courage to be” or an authentic/inauthentic “being towards death.”

Certainly this trend is important for a religion with its very own reanimated founder and accompanying doctrine of bodily resurrection. According to K. Paffenroth, religious studies professor and author of the award winning volume Gospel of the Living Dead: George Romero's Visions of Hell on Earth, the zombie movie is “an examination of human nature at the deepest and most humanizing of levels.” Indeed, zombie tales serve as a kind of thought experiment through which we contemplate questions of enormous existential and ethical significance: What specific attributes define a being as “human”? How are we to define and value “life”? What are our moral duties toward our fellow-humans? Toward non-humans? Where do we draw the line between what we can do and what we definitely should not do in terms of scientific and technological progress? Has such progress weakened our ability to survive without advanced technologies? In fact, a google search will turn up dozens of sermons, from across the religious spectrum, that use zombies to explore similar questions.

But the popularity of zombies reveals something more. Though The Walking Dead and other accounts convey a deep sense of meaninglessness and divine absence that often lead characters to question or abandon their faith, they also possess an extraordinary ability to capture our imagination and, counter-intuitively, to stimulate our sense of play. Consider the degree of creative participation found among enthusiasts. What rouses fans to enact zombie outbreaks, or inspires a Harvard psychiatry professor to pen a fictional epidemiology of zombism (a.k.a. Ataxic Neurodegenerative Satiety Deficiency Syndrome), or motivates lawyers and journalists to spend their spare time writing on the legal/social/political implications of the undead, or moves professors to devote college courses to them and newlyweds to incorporate them into their wedding photos?

The questions that zombies pose about the nature of the human being and the meaning of life and death somehow elicit these very human attributes of playfulness, creativity, and sociability. According to the fictional account by Harvard professor Steven C. Schlozman, the U.N. and World Interfaith Council respond to the urgent necessities of a zombie pandemic by defining the human in terms of the capacity for social connectedness and “emotional recognition of others as sentient beings.” Karl Barth understood humanity in similar terms of mutual recognition, mutual communication, mutual assistance, and encountering the other with gladness. The zombie, on the other hand, does not recognize, connect, or communicate. Incapable of fellowship, he experiences no gladness and has no capacity for play. But in the revolt against the inhumanity of the undead, genuine humanity is revealed in those who find gladness in cooperative communities of fellow-survivors.

Similarly, back here in the pre-apocalyptic world, this latest outbreak of zombie fever has inspired creativity and brought people together in ways more playful but no less powerful than the real (or, more accurately, fictional) thing—a worthy accomplishment in a disconnected world. And so… Viva Zombies!

“What Lies Ahead,” The Walking Dead episode 2.1 first broadcast 16 October 2011 by AMC.  Written by Frank Darabont and Robert Kirkman.  Directed by Gwyneth Horder-Payton.

S. Schlozman, The Zombie Autopsies: Secret Notebooks from the Apocalypse

Jessica DeCou is a PhD candidate in theology at the University of Chicago Divinity School. She is currently a Junior Fellow at the Martin Marty Center, a Louisville Institute Dissertation Fellow, and a contributor to the forthcoming volume, The Undead and Theology, edited by K. Paffenroth and J. Morehead (Wipf & Stock).
----------

The Religion & Culture Web Forum presents The Future of Muslim Family Law in Western Democracies by John Witte, Jr. "How should Muslims and other religious minorities with distinctive family norms and cultural practices be accommodated in a society dedicated to religious liberty and self-determination, and to religious equality and non-discrimination?" In this month's Religion and Culture Web Forum, John Witte, Jr., a distinguished scholar of legal history and religious liberty, analyzes arguments for the establishment of Shari'a courts within Western democracies. Drawing on the historical experiences of Jewish and Christian communities in the West, Witte also discusses the ways in which state accommodation must be met by accommodation on the part of religious groups.
----------