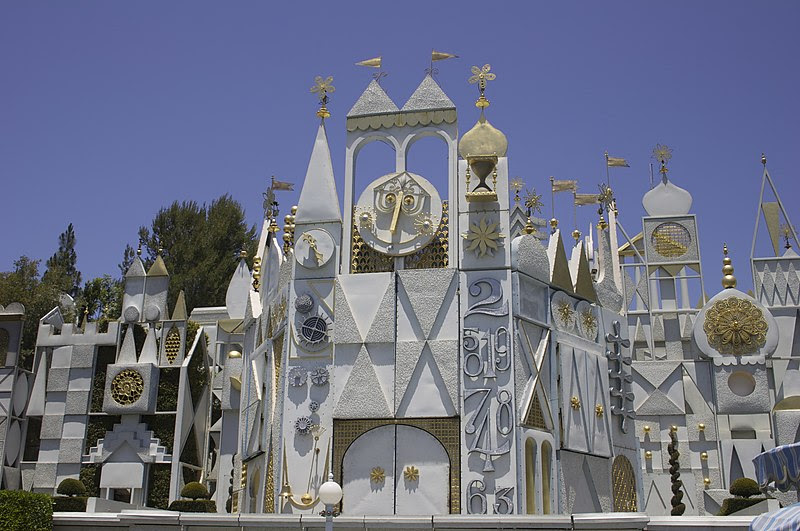 I love Disneyland, but getting stuck on the Small World ride isn't my cup of tea!  I've been on the ride enough to know that it's not may favorite, but it does have a message that is pertinent for today.

We live in a global society.  We can try to hide, but we fail.  Gas prices in the United States are influenced by global oil prices.  Gas prices are relatively high right now, even though there's plenty of gas supplies.  The Stock Market has fallen in recent days, not because of concerns about what's happening here, but because of an economic and political crisis in a little country in Southern Europe -- namely Greece (population of 11 million).

So, how does this reality affect our politics?  Can we hold the government responsible for events outside our borders?  For instance, can we blame the President for events in Europe that affect our country?  Can we withdraw from the world economy?

Then there are things we do in this country that have implications in other country.  For instance, the proliferation of drug use in America, which we continue to criminalize, has contributed to violence and instability south of the US border.  Could we alleviate much of this problem (as well as resolve much of our national debt) by legalizing and regulating the use of marijuana?

This global reality has religious implications as well.  We no longer live isolated from one another, but rather live as neighbors.  Children in the city where I live, Troy, MI, go to school with children who are Hindu, Sikh, Muslim, Jewish, Serbian Orthodox, Greek Orthodox, Roman Catholic, Romanian Catholic, Chaldean, Baptist, Presbyterian, Pentecostal, and more.  We can withdraw our children from public school to protect them from these influences, but is this wise?

When we think of the global religious environment that is situating itself in our midst, how does this reality affect the way we view God?  Or, our religious practice?  Is it opening new doors or is closing them?

Are you ready to live in an increasingly small world -- after all!
economics Globalization politics religious pluralism Troy Michigan