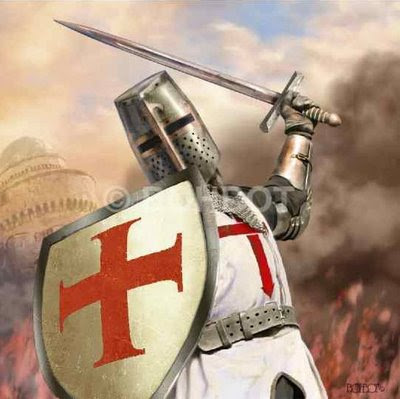 Growing up I learned my share of hymns and songs at church.  Among these was the hymn "Onward Christian Soldiers."  It's not in the Chalice Hymnal, but a generation earlier it was a singular favorite.


Onward, Christian soldiers, marching as to war, with the cross of Jesus going on before.
Christ, the royal Master, leads against the foe;  forward into battle see his banners go!

Refrain:  Onward, Christian soldiers, marching as to war, with the cross of Jesus going on before.

It was sung with missionary fervor -- Christians saw themselves taking the message of Jesus to the far ends of the globe, making the world a Christian place.  And with whom were we at war?  Well, the second stanza suggests that our foe is Satan (the ruler of this world).  We push Satan back by converting to Christianity the people of the world.  In an age when "foreign missions" galvanized the church, not just evangelicals, but Mainliners too, the idea that  Christians should be crusaders for Christ was an unquestioned assumption.

As we look back on this earlier age, it becomes clear that the developers and supporters of this agenda didn't allow for much daylight between the gospel and western civilization.  Mission was imbued with this idea of manifest destiny.  Consider this statement from Josiah Strong's book Our Country. 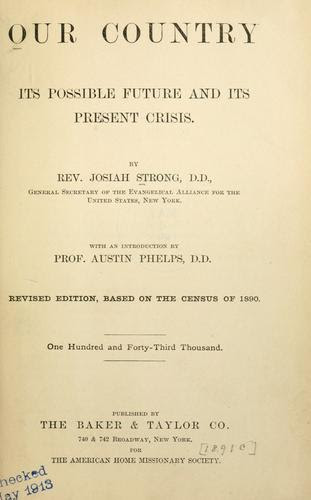 It seems to me that God, with infinite wisdom and skill, is training the Anglo-Saxon race for an hour sure to come in the world's future. Heretofore there has always been in the history of the world a comparatively unoccupied land westward, into which the crowded countries of the East have poured their surplus populations. But the widening waves of migration, which millenniums ago rolled east and west from the valley of the Euphrates, meet to-day on our Pacific coast. There are no more new worlds. The unoccupied arable lands of the earth are limited, and will soon be taken. The time is coming when the pressure of population on the means of subsistence will be felt here as it is now felt in Europe and Asia. Then will the world enter upon a new stage of its history-the final competition of races, for which the Anglo-Saxon is being schooled. Long before the thousand millions are here, the mighty centrifugal tendency, inherent in this stock and strengthened in the United States, will assert itself. Then this race of unequaled energy, with all the majesty of numbers and the might of wealth behind it-the representative, let us hope, of the largest liberty, the purest Christianity, the highest civilization-having developed peculiarly aggressive traits calculated to impress its institutions upon mankind, will spread itself over the earth. If I read not amiss, this powerful race will move down upon Mexico, down upon Central and South America, out upon the islands of the sea, over upon Africa and beyond. And can any one doubt that the result of this competition of races will be the "survival of the fittest?"

Now, it should be pointed out that Strong wasn't a conservative.  Theologically he was very liberal.  He was a social gospeler and a Christian Socialist, but he believed strongly in the religious value of American imperialism.

I share this information this morning because there continue to be strong pushes within the Christian community to support not only mission but Western imperialist actions.  Although I am horrified by what is happening in Syria, I'm worried that forces are gathering that will push us into one more military action -- either in Syria or in Iran that can have devastating impact.  I'm also concerned that some of the rhetoric is reflective of the kind of ideology exhibited in Strong's imperialistic theology.  The call for America to have such military dominance that it can impose it's will wherever and whenever it wishes in unilateral fashion will lead us down a dangerous road.  That most of our recent military efforts have been focused on primarily Islamic countries, and the belief in these countries that the United States is a monolithic Christian nation, only fuels the cultural and political divide that leads to violence.

There is a reason why "Onward Christian Soldiers" isn't in our hymnal.  It is a reflection that as a denomination we have rejected an earlier imperialist understanding of the gospel.  Jesus's realm will not be built by Christian soldiers marching as to war.  Let us, therefore, be cognizant of our own responses to calls for war on the part of politicians and preachers.  And we who seek to be missional in our understanding of our faith, need to be wary of any tendency in that direction as well.