On the Road Together -- A Sermon 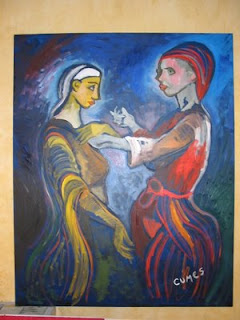 I thought about singing Willie Nelson’s “On the Road Again,” but thought better of it.  But I could have used that song title as the title for this sermon.  It is, after all, a sermon about spiritual journeys in the company of others.

Our text this morning reminds us that migration is a common theme in the biblical story.  Beginning with Adam and Eve’s departure from Eden and on through Abraham and Sarah’s journey from Ur to Canaan, Jacob’s various journeys, including a final one that took him and his sons to Egypt, and then the return of Jacob’s descendants to the Promised Land with Moses.  Jesus himself was an itinerant preacher, who traveled in the company of his disciples, and of course, Paul is known for his missionary journeys.

These journeys, like most journeys, have some purpose to them. It might be famine or it might be war.  It could be that God has sent a person on a journey to bring a message of good news.

People came to the United States during the 19th and 20th centuries from around the world looking for economic opportunity that they couldn’t find back home. Others came because of political oppression.

Naomi and Elimilech, residents of Bethlehem moved to Moab, the land of their ancient enemies, to escape famine in Israel.  This was during the time of the Judges.  In time, as the story goes on, Naomi’s husband dies, leaving her alone with two sons, who then marry Moabite women.  Their decision to marry “foreign women,” suggests that they had decided to settle down in Moab. What had been their refuge would become their home.  But that’s not how the story ends.  After a few years, the sons die, and Naomi and her two daughters-in-law are left alone.  Back then there were no pensions or Social Security.  If you had family who was willing to take you in, then maybe you had a chance.  If not, life was difficult.  Naomi couldn’t expect help from the families of her daughters-in-law.  They may have been cut off from their families because they married outside the tribe.

And so Naomi decided to return home to Bethlehem.  Maybe she could find help among her family members.  Besides, she’d heard the news that God was providing food for the people.  The famine that had led her and her family to migrate to Moab was now over. But what about these two women?  She couldn’t expect her family to welcome them with open arms.  After all – they were foreigners, strangers.  No, it was best if Orpah and Ruth returned to their families.  Hopefully they could be reconciled and even find husbands to provide for them.  Naomi was past the age when she could raise up sons to provide for her daughters-in-law.  And besides, the death of her sons essentially severed the family relationship.  You know how that is – if you’re the in-law your relationship with your spouse’s family is only as strong as the friendship that emerges over time.

As you know, there’s an election on Tuesday, and that event has caught our attention – for good or for bad.  I’m a political junkie, but I’ll be glad when the TV ads, robocalls, and mailings have ceased.  But, the election isn’t the only event to have caught our attention.  We’re living just a few days after Hurricane Sandy struck the East Coast.  Although we got a bit of the wind and rain, it was nothing like what the people of New Jersey and New York experienced.   As I think about the storm and its aftermath, I began to wonder what the story of Naomi and Ruth had to say to us.  What message might it have for us?  Could there be a message of hope that is found in the strength of relationships forged during difficult times?

When Naomi decided to return home, she encouraged Orpah and Ruth to return to their homes, but neither of them was ready to leave Naomi’s side. They received this news with great distress and sadness.  Naomi finally convinced Orpah to return to her family, and from that point she disappears from the story.   Now Orpah sometimes gets bad press for her decision, but it really was the wise decision.  Her future was brighter, and perhaps Naomi’s was brighter, if she returned home.  After all, continuing the journey with Naomi meant moving to a foreign land, with different customs and religions.

Ruth, however, is stubborn.  She refuses to heed Naomi’s instructions, and apparently doesn’t seem to care about her future prospects.  In the end, she wears Naomi down, and Naomi accepts her companionship on the way to Bethlehem.

Despite being an outsider in Israel, Ruth pledges her undying loyalty and service to a woman who could give her nothing, a woman in need of her own redemption.  In her response to Naomi’s requests she declares: “where you go, I will go” and “your God will be my God.”   In fact, I intend to be buried, where you are buried.  With this, Naomi and Ruth begin a journey of faith together, a journey that started with little promise, and yet it’s a journey that leads to the redemption of Naomi, Ruth, Israel, and in the end, all of us.  You see, Ruth is the ancestor of David, and according to the genealogy of Matthew, she is the ancestor of Jesus.  In fact, she’s only one of four women to appear in that genealogy.

Ruth’s decision is essentially a conversion.  In following Naomi, she trades the gods of her people for Naomi’s God – Yahweh.  This decision may have been more difficult than we can imagine. You see, in that day, religion wasn’t just a choice, it was part of one’s identity.  Besides, when Ruth looked at Naomi’s situation, it sure didn’t seem like Naomi’s God had taken good care of her.  Still, she made the commitment of faith and entrusted her life and her future to Naomi’s God.

This conversion leads to a covenant relationship – with God, with the people of Israel, and with Naomi herself.  Ruth says to Naomi,   “Where you go, I’ll go.  Your people will be my people.  Your God will be my God.”   But why does she make this covenant? As I said earlier, the family relationship had essentially been dissolved with the death of Naomi’s sons.  They didn’t have any responsibility for each other, and yet Ruth makes this covenant with Naomi and therefore with Naomi’s God and with her people.  In fact, Ruth even swears that if she broke the covenant then the LORD had permission to strike her down.  That’s quite bold – to say that only death and burial could break this bond.  That’s a powerful kind of friendship, which few of us are able to forge.

This kind of covenant commitment, however, is the foundation of Christian community.  In the relationship between Ruth and Naomi, we see that the Christian journey of faith isn’t an individualistic trek.  Instead it’s one we take in the company of others in the power and presence of God’s Spirit.  Ruth seems to have understood this truth better than Naomi, but in the end Naomi came to see that their futures were connected.  No matter what might come their way, they were in it together.  As Paul says of the Body of Christ, when one suffers, we all suffer, and when one rejoices, we all rejoice.

The church is more than a religious organization.  In fact, it’s more than a family.  It is rather a community of people sharing a journey together with Jesus who is our founder, our guide, our benefactor, and our friend.

Taking the journey of faith by ourselves – as lonely nomads – might seem quicker and even easier, but Ruth understood that the easy way isn’t always the best way.  True blessing comes as we forge powerful relationships that stand the test of time and the many challenges that life presents.

In the end, both Ruth and Naomi find God’s blessings in each other’s company.  Ruth gained a husband, Boaz, a child, and a destiny, while Naomi found her own salvation in the company of her friend.

With Ruth I invite you to make your covenant with God and with God’s people.  No matter where we go, no matter what happens to us, in Jesus we’re joined together in covenant relationship.  The Spirit of God links us together with bonds that exceed family, tribe, and nation.  With Ruth as our guide, we hear the call to join together in serving one another.  As Jesus himself said, the reign of God is based on two commandments: Love of God and love of neighbor.

So, as we sing our hymn of invitation, “I Am Thine O Lord,” may we say to each other:  Where you go, I will go.  Your God will be my God!