A Legacy Buried, But Not Gone: The Importance of the Ancient Near East for Modern Religious and Political Life -- Sightings 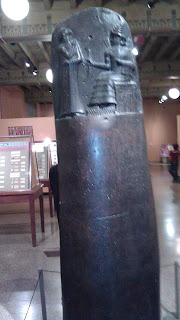 Sightings  11/29/2012
A Legacy Buried, But Not Gone:
The Importance of the Ancient Near East for Modern Religious and Political Life
-- Sam Boyd
Once upon a time, in a far-away land, there existed a large kingdom. The king’s name was Yarim-Lim, and he was king of the Yamkhad dynasty, the capital of which, Halab, rivaled the capital of the other empires surrounding him. Yarim-Lim was a religiously observant man, as many of that time and place were, and was keenly aware of the fate of his father who was killed when attempting to overthrow another king named Shamshi-Adad. The god Adad had appointed Shamshi-Adad as ruler, and Yarim-Lim’s father paid for his transgression with his life. As a result, when Yarim-Lim succeeded his father, he became obsessive about religious protocol, insisting that political and religious observance (which sometimes overlapped- like they do in the modern world) be followed in all interactions with his peers.
This story may seem like a fairy tale, full of strange names, dramatic events, and unusual customs from a foreign world. It is also a story very much grounded in history. The capital Halab is now known as Aleppo in modern day Syria. Yarim-Lim ruled in the first part of the second millennium BCE, contemporaneous with another king, Hammurabi, whose name may be much more familiar to people today. Yet during his lifetime, Yarim-Lim’s power and authority perhaps exceeded Hammurabi’s, and also likely surpassed the magnitudes of those more famous kingdoms, Israel and Judah, which would emerge centuries later. If Yarim-Lim was such a powerful ruler, why is his name now so obscure compared to other ancient kings?
Part of the answer lies in the peculiar nature of Aleppo’s history. It is one of the oldest and most continuously occupied cities in the world. As such, its early remains are buried under millennia of human occupation. Part of the obscurity of Yarim-Lim also stems from modern lack of awareness of ancient Near Eastern history and culture. A quick browse at many local bookstores reveals that world history quickly jumps from categories like “myth” and “fairytale” to Greco-Roman history (with a few books on the Egyptian pyramids sprinkled in between). Yet it was the genius of Henry James Breasted, founder of the Oriental Institute at the University of Chicago, to show that modern thought and categories are much more deeply indebted to Near Eastern culture than many presentations of world history suggest. This connection between the ancient East and modern West is memorialized above the main entrance of the Oriental Institute’s museum, where an ancient Egyptian is shown handing the light of knowledge to a modern person. Even our familiarity with documents such as the Hebrew Bible (or Old Testament) in modern religious traditions often hides how ancient this document is. The lack of familiarity with ancient Near Eastern texts (including the Hebrew Bible) exists even as many people attempt to coopt these texts and the personas therein in the modern political landscape. This situation necessitates the critical study of this seemingly arcane period in human history in order to check the claims of those who would illegitimately appropriate some aspect of this period for their political advantage.
Adopting the legacy of ancient heroes and heroines is nothing new. The famous third century CE philosopher, Porphyry, dedicated his major work to Cleopatra, an oddity since Porphyry’s connection to this famous last of the pharaohs is by no means obvious or logical. It seems as though queen Zenobia of Palmyra had established herself in the legacy of Cleopatra so closely that she even took on the pharaoh’s name. More recently, when Saddam Hussein came to power in the Baathist regime, he immediately began to build a replica of Nebuchadnezzar II’s palace. This Neo-Babylonian structure had multiple lives in antiquity, including being the site of Alexander the Great’s death. Saddam Hussein’s contribution to the afterlife of this structure had profound religious and symbolic power: by copying the palace of Nebuchadnezzar, and even adopting the name of the Neo-Babylonian king as a secondary name, Hussein sought to shape his role in the modern world. Just as Nebuchadnezzar II had destroyed ancient Judah and its capital Jerusalem, Saddam Hussein hoped to oversee a similarly destructive outlook towards Israel. He also aspired to create an enduring legacy like Nebuchadnezzar’s and Alexander’s.
Halab remains buried, as does its king Yarim Lim, a reminder that forgotten kingdoms, though they may not be a part of modern consciousness, played pivotal moments in our world’s history. The fact that Yarim-Lim rivaled Hammurabi of Babylon attests to the former’s historical influence at a time when Hammurabi was creating literary culture through his laws that would last a thousand years and possibly influence the Bible itself (in the law code in the Book of Exodus). As such, the study of the ancient Near East remains vital for understanding world history, even when the people and places are initially unfamiliar to us. Moreover, this history is crucial for understanding how modern politicians craft their agenda as part of a lineage they claim simply to be preserving. The example of Nebuchadnezzar shows how the legacy of these ancient rulers can be resurrected and manipulated in the modern political and religious landscape. Indeed, the historical study of this region perhaps matters now more than ever as leaders such as Mahmoud Ahmadinejad make claims that Israel had no historical existence in the land and therefore currently has no modern validity as a nation. It is through the study of the ancient Near East that such fallacious historical assertions are shown to be the extremist propaganda that they are.
References
Alan Riding, “Aftereffects: Babylon; Monuments Recall Another Empire That Ignored Writing on the Wall,” New York Times, May 2, 2003.
http://www.nytimes.com/2003/05/02/world/aftereffects-babylon-monuments-recall-another-empire-that-ignored-writing-wall.html
Robert M. Whiting, “Amorite Tribes and Nations of Second-Millennium Western Asia,” in Civilizations of the Ancient Near East (edited by Jack Sasson; Peabody, Massachusetts: Hendrickson Publishers, 2000).

Sam Boyd is a PhD Candidate in a multidisciplinary degree between the Department of Near Eastern Languages and Civilizations and The Divinity School at the University of Chicago.
----------
This month’s Religion & Culture Web Forum is entitled “Pussy Riot, the Media and Church-State Relations in Russia Today” by Katja Richters (University of Erfurt). What role was played by the Russian Orthodox Church in the arrest and sentencing of the band Pussy Riot earlier this year? And what are the implications of this case for church-state relations in Russia today? In this month's web forum, Katja Richters argues that the "reluctance on behalf of the Moscow Patriarchate to become more actively involved in the [Pussy Riot] lawsuit combined with the disunity its leadership displayed in its approach to the punk prayer gave rise to a vacuum that could be filled in many possible ways by both the media and the state. The latter took advantage of this situation by presenting the [Church] as a victim which it needed to protect." At the same time, Richters stresses, "the relationship between the [Church] and the Kremlin is much more complex than the recent developments would suggest." Read Pussy Riot, the Media and Church-State Relations in Russia Today
----------

Anonymous said…
I think the origins of our spirituality will always be important to us sentimentally.

It's a connection to something bigger than ourselves and a recollection of history.

It reminds me of this video I recently came across-- it's a cute little song about how Jesus and his followers actually Occupy Jerusalem.

Anyways, here it is: http://youtu.be/a6akkb_afqs

Which, it has a point.