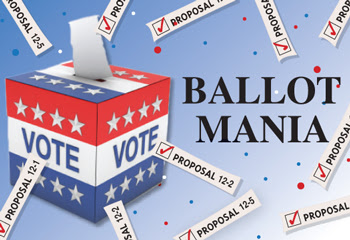 Since my candidate endorsement posting was getting a bit lengthy, I decided to create a separate, though brief, statement on the six state-wide Ballot Measures.

I’ll just say this about measures 1-4 -- I may go either way on them.  On measure one, which would end the emergency manager law, I’m conflicted.  I believe in the power of communities to elect their own leaders.  That said, a number of communities are in deep financial disarray, and are looking to the state for help.  The purpose of the law is to give the state greater control over the decision making as communities emerge out of their financial problems.  I realize that one of the casualties are collectively bargain contracts.  But if cities go bankrupt, this may not matter.   I likely will vote to keep the law, but not happily.

On measures 2-4.  I support collective bargaining and understand fears that Michigan could end up with Right to Work laws that undermine that process.  I’m just not sure that this requires a Constitutional remedy.  On Prop 3, I believe that we need to move toward more diversified  forms of energy, especially renewable energy, but again does this require a constitutional remedy?  I would say the same with Prop 4, which enshrines in the state constitution a variety of reforms for nursing care for the home-bound.

When it comes to amending the constitution, whether Federal or State level, you need to have a pretty good reason for doing so.  Constitutional amendments need to be specific, focused, and have broad application.  Remember that the Courts must interpret the Constitution, and amendments like the ones proposed can have unintended consequences that can harm the nation or the state.   So, while on the merits I support the proposals, I’m not totally convinced that the Constitution is the best place for them.

Now, as for Propositions 5 and 6.  Both have connections to one of the most self-serving and as far as I’m concerned crookedest business people in the region – Matty Maroun, owner of the Ambassador Bridge, a number of trucking companies, and other concession operations that have held the region hostage.  Prop 5 requires a 2/3rds majority in the legislature to raise taxes or reform the way taxes are collected or levied.  Maroun hopes that this will keep the state from making expenditures on a new bridge, but it would wreak havoc on the state’s budgetary process.  Now, some might think this is a wise tying of the hands of politicians, but it would enable the tyranny of the minority to control the legislature.  Believe me, I know this to be true because this is the law in California, the state I lived in for nearly three decades before moving here in 2008.  It has caused untold headaches and prevented budgets from being passed for years.  You’ve heard about gridlock in Washington – well think about what would happen here with this law.  This is designed to protect one person’s interests at the expense of the rest of the citizenry.  So, Vote NO!!!

Then there’s Prop 6, a measure that is being sponsored by Matty Maroun, who has spent over 30 million dollars on advertising that is at best dishonest and disingenuous, and at worst a fraud perpetrated on the people of Michigan.   Opposition to this proposition is as bi-partisan as any you can find.  The Governor, business leaders, the Canadian government, and the Federal Government are opposed.  The point of the measure is that any new international bridge or tunnel would require a vote of the people to proceed.  Imagine if every time a bridge or road needed to be built we had to call a special election.  This is simply ridiculous.   And why this amendment?  To protect a business monopoly benefiting one family at the expense of the rest of us – on both sides of the international border.  Most disconcerting is the dishonest ads that would lead us to believe that this project would lead to fewer teachers and public safety personnel, as well as fewer bridges and roads in Michigan – due to all the expenses incurred as a result.  Only one problem, the Canadian government, which so desires this crossing to benefit its own economy, is willing to pick up ALL of Michigan’s costs.  Tolls will be collected to pay for the bridge and the rest of the infrastructure required.  And if the tolls don’t cover the costs, Canada, our closest ally and trading partner, has guaranteed to pick them up.  So, this comes at no cost the state and will be a boon for business and will create thousands of jobs.  So, vote NO on this boondoggle of an amendment.  Don’t let this “Crook” defraud the state!!  If he gets away with this, then this is only the beginning of deceitful political advertising!!  You think it’s bad this year, wait till the next time around!

Say NO to Matty Maroun by voting no on Props 5 and 6!