The Religious Right after the Election -- Sightings (Martin Marty) 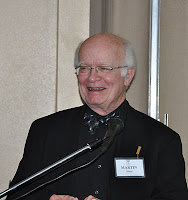 The 2012 elections are now over -- though there may be a few races yet to be decided through recounts.  Now that the dust has settled, people have begun to analyze the situation and decide what the future holds.  What we know is that at the Federal level things are pretty much where we left them.  President Obama is still President, the Senate is in the hands of Democrats, and due to , apparently, gerrymandering, Republicans retain control of the House of Representatives.  There are lots of fish to fry going forward, but that's not the point of Martin Marty's analysis that came out on Monday.  He asks the question -- what does this election portend for the Religious Right?   It's an interesting question as we move forward.  Take a read and offer your thoughts.
********************************************

The Religious Right after the Election
-- Martin E. Marty
Through the years your Monday Sightings has never commented on presidential campaigns, and the contest held this year is no exception. Today, self-liberated from the practice of opting-out, we can survey the comments on “public religion” in the campaign and election just past. We usually footnote these columns with reference to newspaper and internet coverage of the topic of the week. This year we will list a few, but doing so is hardly necessary: by today your computer can come up with scores, if not hundreds of stories and editorials on the subject. Scan them and you will find rare unanimity on this kind of issue: the Religious Right, aka the Christian Right, aka the Evangelical-Catholic Right experienced losses on its key chosen issues enough to raise questions about its influence: has it been over-rated all along?
We’ve been through milder versions of this in the past. Every setback of these coalitions has elicited widespread comment about the “decline” or “end” of the political Religious Right. Yet it remains, and churches covered by the term Right tend to be stable or growing. Huge majorities of members from these voted for Governor Mitt Romney. Yet on the issues chosen by their leaders and advocated for—even to the point of law-breaking and taunts to the I.R.S. about overt electioneering—they won little. The biggest losers were the Roman Catholic bishops, strongest advocates on sexual issues which did not attract their membership. (On Catholic social issues, bishops and members were more in line with church teaching, but most citizens don’t know or note or care that there is such a match.) The National Catholic Reporter, from the Catholic left, judged that among “the big losers . . . on Election Day 2012, the Catholic bishops are big losers.” The “nuns on the bus,” who are being chastised by Catholic officialdom, “on the other hand, were real winners in the Catholic world with their emphases on economic justice.”
On the Evangelical side, the losses were even more notable, as Laurie Goodstein chronicled them in a long New York Timescover story. The judgments on that page were not slanted by Times bias, because Ms. Goodstein simply quoted the evangelical notables. Lined up against President Obama and for Governor Romney, chiefly over the sex-and-marriage type issues were Billy Graham, whose organization paid for full-page ad after ad in the big papers, Ralph Reed, Albert Mohler, less-known Bob Vander Plante, and more—and more. They expressed, variously, surprise, shock, numbness, disappointment, judgment, and anger. Mohler: “The entire moral landscape has changed. . . An increasingly secularized America understands our positions, and has rejected them.” That “secularized” America who voted against the Religious Right leadership included millions of evangelicals, most Catholics, mainline Protestants, significant numbers of black church members, and, yes, many non-churched citizens.
One hopes that the jarring might inspire some of the leaders to reexamine their positions, the ones they are sure are exclusively congruent with biblical teaching. Who knows where such reexamination might lead? Meanwhile, reliable pollster-commentator Robert P. Jones, head of the Public Religion Research Institute, tied the jolting of the Religious Right to other elements in electoral change, some of them demographic. “This election signaled the last where a white Christian strategy is workable.” We’ll let the Right address that, and Sightings will wait and see when the present campaign (for 2016), which began “the morning after,” Wednesday, November 8 and new reappraisals appear.

----------
This month’s Religion & Culture Web Forum is entitled “Pussy Riot, the Media and Church-State Relations in Russia Today” by Katja Richters (University of Erfurt). What role was played by the Russian Orthodox Church in the arrest and sentencing of the band Pussy Riot earlier this year? And what are the implications of this case for church-state relations in Russia today? In this month's web forum, Katja Richters argues that the "reluctance on behalf of the Moscow Patriarchate to become more actively involved in the [Pussy Riot] lawsuit combined with the disunity its leadership displayed in its approach to the punk prayer gave rise to a vacuum that could be filled in many possible ways by both the media and the state. The latter took advantage of this situation by presenting the [Church] as a victim which it needed to protect." At the same time, Richters stresses, "the relationship between the [Church] and the Kremlin is much more complex than the recent developments would suggest." Read Pussy Riot, the Media and Church-State Relations in Russia Today
----------

Unknown said…
The "Religious Right" is right about "same-sex marriage" and abortion. Their position is Biblical. No need to re-examine those positions, as Marty suggests. Marty and Cornwall and other unbelievers and non-Christians should be thrilled with the election results. I'm sure they are. But the future will turn out much different than what they suppose.
11:00 AM