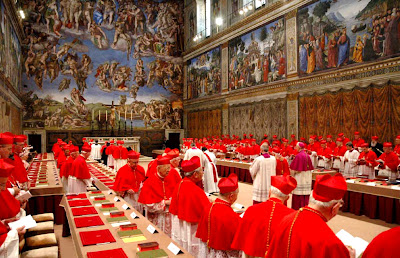 This will be a most interesting week.  All eyes will be on a chimney atop the Sistine Chapel, each of us looking for the proper colored smoke that will signal the election of the next Pope.  Although this election is of great importance to Catholics, many of whom wish to see the church move in a more moderate direction, many of us outside the Catholic fold are also interested in the outcome.  Even if the Protestant and Orthodox churches don't submit themselves to the Pope's rule, there is a perception in the broader world community that the Pope is the prime spokesperson for Christianity.  Even if we disagree with his views and teaching, those teachings have influence.  Many Protestants, like me join others within the Catholic Church, hoping for a more moderate voice.

Tomorrow the Cardinals will begin their conclave and the voting will begin to elect the sucessor to Benedict XVI.    The political maneuvering will subside, and the chosen candidate will emerge.  One hopes that the the Holy Spirit will be set free to move.  There is a lot of betting going on and the odds continue to change.  According to the tea leaf readings from today, the two leading candidates appear to be Cardinal Pedro Scherer, Archbishop of Sao Paulo.  If chosen he would be the first from outside Europe.  Having served within the Vatican bureacracy, he would have a base of support in the Curia.  According to Wikipedia, he might be on the moderate side (something I would love to see).  The other leading candidate apparently is Cardinal Angelo Scola, Archbishop of Milan.  Though apparently a traditionalist, he is known as a good manager -- something the Vatican needs -- and has burnished his credentials with engagement with the Muslim World.

Those hoping for major changes in the church will likely be disappointed, but you never know.  If the Holy Spirit is let loose, as at Vatican II, who knows where things will lead.  In the meantime, we will all wait to see where the voting leads!  Before we know it there will be a new Pope, and a new era will begin.

Of course none of us get a vote.  So, my ruminations likely will have litlle effect on the outcome, but my thoughts and prayers will be with those in the room, with hopes for a new direction for this church.

I think I'll go with Scherer -- for a geographical change!  Having switched from Scolo for my pick, I'd enjoy hearing what your thoughts and hopes are for this next papal era.  What say you?
Email Post
Labels: Christianity Holy Spirit Papacy Papal Elections Pope Benedict XVI Roman Catholic Church