Where’s the Fruit? A Sermon for Lent (3) 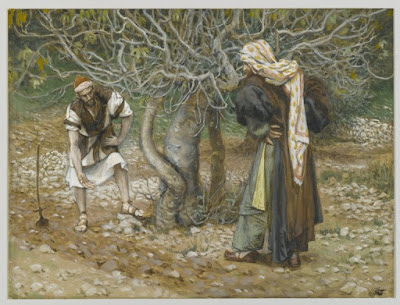 
I’m not a gardener.  I do try my best to keep the flowers blooming, the grass growing, the hedges trimmed, and the weeds at bay, but, I’m not gifted with a green thumb.  But, whatever my deficiencies as a gardener, I do know that if you plant a fruit tree, you expect it to eventually bear fruit.  So, if it doesn’t bear fruit, shouldn’t you pull it up and replace it?
Jesus told a parable about a fig tree that was three years old.  Since it hadn’t produced any fruit, the impatient land owner told the gardener to replace it.  He was tired of waiting for his fruit.

This parable follows after a conversation about sin and repentance.   I realize that these aren’t topics that we enjoy discussing, but they’re part of the biblical story.  Jesus is talking to a group about whether the end is near.  Just like today, people were quite sure that the world is so corrupt that God might as well blow things up and start over.  Of course, time rolls on, and Judgment Day continues to get put off till later.

Sometimes tragedies stir up these conversations.  People wonder whether an earthquake or a flood is a sign of divine judgment.  They try to find spiritual meaning in the attacks of 9-11 or Hurricane Katrina. Here in  Luke 13, Jesus gets asked about a group of Galileans whom Pilate’s soldiers massacred as they worshiped in the Temple  He asks the group whether these Galileans were greater sinners than other Galileans?  Or, for that matter, what about the eighteen who died when the Tower of Siloam collapsed?  Were they greater sinners than anyone else living in Jerusalem?  Jesus’ answer is simple – no, but you should repent of your sins, unless you want to perish as they did.

I’m not sure Jesus’ answer makes us feel any better about sin and the need to repent, but it does raise important questions that maybe we should consider.  I think the idea of repentance makes us feel uncomfortable because too many of us have suffered through fire and brimstone sermons.  Just yesterday, as Brett and I were driving home from the funeral, we spotted a car with a big sign urging us to repent of our sins.  But we don’t have to look at repentance in this way.  For Judaism and early Christianity, repentance is a positive action.  It involves turning back to God so we might bear fruit that expresses our covenant community.

Repentance isn’t focused on toeing some moral line.  No, it’s focused on restoring broken relationships with God and with neighbor.   The reason Jesus talked about sin and repentance is that he understood that until we recognize the power of sin in our lives and in our culture, we won’t be in a place to let God begin to mend our lives and our world.  We need what ethicist Glen Stassen calls an “honest realism about our own conscious and unconscious self-defenses and their power over us” (A Thicker Jesus: Incarnational Discipleship in a Secular Age

, pp. 124-125).  This involves letting go of ideologies that make us complicit in injustice.

Dietrich Bonhoeffer spoke of sin’s six dimensions.  The sixth dimension seems to fit here.  This is our tendency to evade responsibility and to place the blame on others.  You know, like Congress, which can’t seem to solve problems and so they point fingers instead.  You also see this in the biblical story of Cain and Abel.  You know --Cain doesn’t want to take responsibility for his brother’s murder.  It’s God’s fault for not accepting Cain’s sacrifice – or its Abel’s fault for offering a better sacrifice.

And so we come back to the parable of the Fig Tree.  A landowner plants a tree and for three years he comes expecting it to bear fruit.  By the third year he’s thoroughly frustrated.  He’s invested time and money and land so he could harvest figs, but there still wasn’t anything to show for his investment.  So, why not start over?

If you were the land owner, what would you do?  Would you let the tree continue to take up valuable space?  Or would you root it up and plant a new tree?

The owner decides it’s time to move on, and so he tells the gardener to replace the tree.  Interestingly enough, the gardener asks for more time.  Just one more year?  After all, if we replant now, it’ll take time for the new tree to bear fruit. With a little love and affection – that is digging around in the soil and laying out manure – perhaps the tree could be coaxed into providing the expected fruit.  So, won’t you give the tree one more chance?  Then, if it doesn’t work, we’ll pull it up.  There is grace in this message, but there’s also judgment.  That’s the way it is with God.

Before we leave the parable, we might want to identify the characters in the story.  As you heard the parable, did you think that God is the land owner and Jesus is the gardener?  That’s how most people read it.  We tend to think of Jesus being the gracious one and God the judge. But is this the picture of God that Jesus offers us?  Is this the same God whom Jesus identifies with the Father who scans the horizon looking for the Prodigal Son, and then welcomes him back with open arms?

As we think about how to envision God and God’s responses to our own lack of fruitfulness, perhaps we might re-envision the character of the gardener.  David Lose suggests that God “is this peculiar gardener, the one so partial to unyielding fig trees.  God, that is, isn’t beneath loosening the soil around us and even spreading manure in the hope that we may bear fruit.  Why?  Because God loves us and wants what’s best for us.”

So, where’s the fruit we’re to bear?  After all, God is a busy gardener, preparing us for this purpose.  Or, as the Ephesian letter puts it:

For we are what he has made us, created in Christ Jesus for good works, which God prepared beforehand to be our way of life.  (Eph. 2:10 NRSV).

This fruit -- these works – is an expression of God’s grace.  They’re not a burden to be evaded.  They’re gifts to be received.  They are expressions of the call to love God with our entire being and to love our neighbor as we love ourselves.

May we use this Lenten season to ponder the question of whether or not our faith is truly fruitful.  The message of the season is simple – let go of those things that keep you from drawing near to God, those things that hinder fruitfulness.  This is, I believe the true call to repentance – a call to return to God’s presence with an open heart ready to let the Gardener prepare us for Good Works!