A Life Restored -- A Sermon for Easter 4C 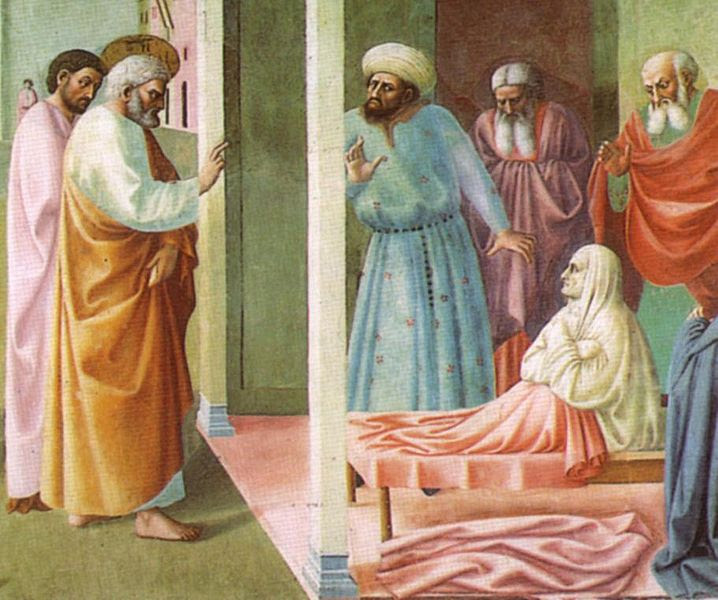 This has been a week marked by images of death. It’s not the sort of week that we associate with the Easter season, and it at least changed the context for this sermon.  Our continuing celebration of the Resurrection has been interrupted by the deadly explosions at the Boston Marathon and at a fertilizer plant that devastated a small Texas town.  Four people died in the first event, and at least fourteen in the second.

Events like this week’s two tragedies catch our attention.  We can become engrossed in the stories, which were told and retold countless times during the week.  Friday morning began with news of the death of one suspect in the Boston bombing, and ended the day with the capture of the other.  But what message did we take from these events and others that occurred in the past week?  These events are close to home, so we pay attention.  What about those who died in China in a deadly earthquake on Friday?

This morning we’ve heard the story of Tabitha, the third of our five transformative encounters with the Risen Christ.  This is the story of a life restored.  It’s a call to remember that Easter is God’s sign that death has met its match.  Paul writes:

For since death came through a human being, the resurrection of the dead has also come through a human being for as all die in Adam, so all will be made alive in Christ (1 Cor. 15:21-22 NRSV).
This is the word of hope that sustains us, even in times of great tragedy.  In Christ we all have life.  Death has been defeated, which leads Paul to declare:

In moments of tragedy, like the ones we’ve experienced this past week, such words may seem unrealistic.  Fear and anger seem like the more realistic responses.  But if we let such emotions have control of our lives, we can fall into despair and even turn to violence.  And so it shouldn’t surprise us that there have been several reports of Muslims being attacked – not because they were involved, but because they were useful scapegoats.

Perhaps Paul is misguided.  May be death continues to have its sting.  Death does continue to make its case. Like hate and anger, death is powerful.  It’s seductive in its darkness, creating a cycle of violence that isn’t easily stopped.  But this isn’t the message of the Gospel!

The message that comes through to us in the Resurrection declares that life is sacred.  This sacredness, as David Gushee points out, is a conferred value.  It’s not intrinsic or inherent to human life.  Instead, it’s a gift of God.  He writes:

Human life can be described as sacred insofar as the majesty, holiness, presence, love, and care of God touch it, are related to it, and are directed toward it.  To honor human life and treat it with reverence is an appropriate theological, spiritual, and ethical response to God’s character and actions. [The Sacredness of Human Life: Why an Ancient Biblical Vision Is Key to the World's Future, p. 400].

This is the word we hear in the story of Tabitha.  Although she has died, God restores her to life through the healing ministry of Peter.  Tabitha is a disciple living and serving in the community of Joppa.  Luke uses the Greek word mathētria to describe her.  This is the only place it’s used in the New Testament, and when translated literally, it comes out as “woman disciple.”  This singular usage seems to suggest that Tabitha holds a place of honor among the disciples of Jesus.  At the very least, she’s well known for her faith and for her work on behalf of the community.

Although the community sends for Peter, it’s too late for him to save her life.  But this doesn’t deter Peter, who goes to Tabitha’s room, where the widows of the community have gathered.  They show Peter the clothing she’d made – not because they were trying to impress him with Tabitha’s creative handiwork – but because these clothes demonstrated her importance to their lives.  Perhaps their own lives depended on the sale of these clothes.  She was, Luke reminds us, known for her “good works and compassionate acts on behalf of those in need.”

After he gets this report, Peter sends everyone out of the room and speaks to Tabitha’s body, telling her to get up. When she opens her eyes, Peter takes her hand, helps her up, and then goes out and presents her alive.   As a result of this action, “many put their faith in the Lord.”

Now, as with Lazarus, this isn’t a story of resurrection.  Tabitha must still face physical death, but the story does speak to the triumph of life over death in Christ.  Her story is an invitation to honor and respect life.
While death continues to beckon us, should we not seek to promote the flourishing of human life – like Tabitha was known to do?  This is the message that our friend Bruce Epperly  lifts up when he speaks of the power that overcomes a “death-full” life.

Acts 9 and Psalm 23 give witness to a power that can overcome the “death-full” life and enable us to face finitude, threat, and mortality with hopeful and life-transforming liveliness.  God’s spirit is resurrection spirit, inviting us to “practice resurrection” (Wendell Berry) by courageously facing, embracing, and transforming the powers of death, physical, psychological, spiritual, and political in our midst.

Even if we don’t see people being brought back to life on a regular basis, do you hear the message of resurrection present in this story?  Does it reinforce the message that life is precious and sacred?  Does it call you to embrace God’s promise of healing and wholeness?

It’s clear from the story that Tabitha is an important member of her community.  Her restoration to life surely proved to be a blessing to her community.

Although this story raises as many questions as it answers, perhaps that’s the point. We can become complacent about life.  We can even become numb to death, especially when it comes in large numbers.  It’s hard to fathom the death of six million Jews or the genocide that decimated the original inhabitants of the Americas.  It’s still difficult to consider the devastation wreaked on the cities of Nagasaki and Hiroshima by just two bombs.  Now we tend to treat the threat of nuclear war with a shrug of our shoulders.  But when tragedy strikes, it tends to “wake us up.”  But for how long?

It was only a few months ago that a gunman murdered twenty-six children, teachers, and school staff.  Their deaths caught our attention for a moment, but then this past week, perhaps under the cover of other tragedies, the Senate chose to reject a simple law  requiring background checks on gun purchases made online or at gun shows.  How soon we forget.

But if we hold to the message of the resurrection and affirm the sacredness of human life, then can we forget when life is taken away in such fashion?

As we honor human life as sacred to God, doesn’t God hold all of creation to be sacred and worthy of our concern?  After all, we are part of God’s creation, and to us God has entrusted the ministry of stewardship.

Tomorrow is Earth Day -- that annual reminder that we live in a fragile world needing our attention.  This is a world that God creates and loves.  Not only is it our home,  but it’s also the home we share with millions of other species.  And remember – we share DNA with these other species!

So what shall we do?  As one of our beloved members often reminds us – the answer to most questions can be found in the two great commandments.  So, if we’re to love our neighbors, shouldn’t we care about the world in which our neighbors live?

As David Gushee puts it, “Far from setting up environmental concern as a conflict of interest between babies and polar bears, we must instead show the ways in which the same problems, such as climate change, hurt both babies and polar bears” (Gushee, p. 400).  Yes, we’re all in this together.

Like Tabitha, we can be restored to life through our own encounters with the Risen Christ.  We needn’t die physically to experience resurrection life.  If we embrace the message of Resurrection, then shouldn’t we practice it in daily life?  Shouldn’t the message of Easter be the basis of all our relationships – with each other and with creation? And if we embrace this message, shouldn’t we participate in God’s acts of healing creation –  whether this involves human or nonhuman life – as well as the habitat which we share with the rest of creation?

In the Resurrection, it is clear, death has lost its sting, life reigns victorious. Will you join me in taking hold of this gift of God?