A Life Reclaimed -- A Sermon for Easter 3 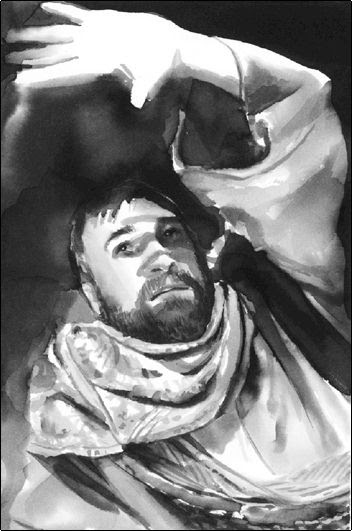 
Christ is risen!  Earth and heaven nevermore shall be the same.
Break the bread of new creation where the world is still in pain.
Tell its grim demonic chorus: “Christ is risen!  Get you gone!”
God the first and last is with us.  Sing Hosanna everyone!  (CH 222)

Yes, let’s sing hosanna because heaven and earth “shall not be the same.”  Because God is in Christ reconciling the world to God’s self, we are now part of God’s new creation.

This morning we take the next step in our journey through the Book of Acts, focusing on how encounters with the Risen Christ transform lives.

This morning I’d like us to consider two important stories about people whose lives were dramatically changed because of their encounters with the Risen Christ.  There’s the story of Saul’s Damascus Road encounter, which we’ve already heard read.  Then there’s John’s story of Peter’s life-changing encounter with Jesus.  In each story a life is reclaimed and a call to ministry is issued.

I’d like to share part of the reading from John 21, where Jesus reclaims Peter and commissions him for service.  As the chapter opens, Jesus’ disciples have gone fishing on the Sea of Galilee.  They’ve been at it all day, but haven’t caught anything.  Then, at the end of the day, Jesus shows up and tells them to cast their nets on the other side of the boat.  Low and behold, the nets are filled with fish.  It’s amazing what happens when you throw your nets on the other side of the boat!

After they have their fish dinner, Jesus turns to Peter and speaks to him about love and service.


Simon replied, “Yes, Lord, you know I love you.”
Jesus said to him, “Take care of my sheep.” 17 He asked a third time, “Simon son of John, do you love me?”
Peter was sad that Jesus asked him a third time, “Do you love me?” He replied, “Lord, you know everything; you know I love you.”
Jesus said to him, “Feed my sheep. 18 I assure you that when you were younger you tied your own belt and walked around wherever you wanted. When you grow old, you will stretch out your hands and another will tie your belt and lead you where you don’t want to go.” 19 He said this to show the kind of death by which Peter would glorify God. After saying this, Jesus said to Peter, “Follow me.”  (John 21:15-19 CEB)

When you think about the founding figures of the church, aren’t Peter and Paul up there at the top of the list?  And yet, both of them must be reclaimed if they’re going to fulfill their calling.

If either of them put their papers before the Commission on the Ministry, the Commission might have some serious questions about their viability as candidates for Christian ministry.  Their resumes suggest that they might be damaged goods – not the type we’d send off to seminary.  And yet, both of them experienced life-changing encounters with the Risen Christ.

In hearing these two stories, do you sense a stirring of God’s call in your own life?  Is the Risen Christ speaking to you about love and service in God’s realm?

Jesus confronts Peter three times, asking him: “Do you love me?”  When Peter answers yes to each question, Jesus then tells him to feed his sheep.  When Jesus asks Peter the third time, John suggests that this saddened Peter. He was hurt by Jesus’ continuing questioning of his love for Jesus. But, there might be a reason for this.  Remember how Peter denied Jesus three times on the night before his death? Maybe, Jesus is reversing the wound that limits Peter’s ability to respond to the call to service.  Having denied Jesus three times, he now declares his love three times.  After this, he’s ready to receive his call to feed Christ’s sheep.

As for Paul – known here as Saul -- he burns with a passionate zeal and heads toward Damascus “still spewing out murderous threats against the Lord’s disciples” (Acts 9:1 CEB).  Like many who fear that their way of life is in danger, Saul turns to violence to protect his community.  In his mind, there’s a virus attacking the community, and he feels called to eliminate it.

But before he can reach his destination, the Risen Christ reaches out and reclaims him for the new work of God.  A bright light in the sky blinds him and knocks him from his horse.  Then, a voice from heaven calls out to him: “Saul, Saul, why are you harassing me?”  Because Saul isn’t sure who is speaking to him, he asks:  “Who are you Lord?”   And the voice answers back: “I am Jesus, whom you are harassing.”  With this revelation, Jesus tells Saul to get up and head for Damascus, where he’ll receive further instructions.

A man named Ananias brings these instructions to Saul, telling him that Christ had chosen him to be his agent to carry the name of Jesus before Gentiles, Kings and Israelites.  After delivering this message, Ananias baptizes him.  Then filled with the Holy Spirit, Saul goes right out and begins to preach about Jesus.  Saul is still filled with zeal, but now Jesus re-channels it so that he can deliver a message of grace to the world.

God has often chosen people we deem to be broken to make known God’s message of love and peace.  Although not everyone has a Damascus Road experience, many have had powerful encounters with Christ that have changed their lives and empowered them for service in God’s realm.

Consider the story of John Newton, the author of one of the most beloved hymns of the church.  Before he encountered Christ, he was a slave trader, but Christ reclaimed him and he devoted the rest of his life to Christian service.

Then there’s Bartolomé de Las Casas, a Spanish priest serving in the New World.  Like many of his colleagues, he received an allotment of Native American slaves.  But over time he began to realize that he couldn’t preach the gospel and enslave fellow human beings.  Not only did he release his slaves he became one of the most important advocates for the human rights of Native Americans of his day.

Although it’s fiction, the movie Gran Torino tells a powerful story of redemption.  In this movie, Clint Eastwood portrays Walt Kowalski, an angry, bigoted man, who refuses to leave his home, even though his Detroit neighborhood is changing.  He’s recently widowed, and he’s lonely, frightened, and increasingly bitter.  But something happens to him when the Hmong family that moves in next door begins to befriend him.  It takes a while, but in time his life is reclaimed.  As the movie nears its conclusion, Walt allows himself to be killed by a gang so that their reign of terror might be put to an end.  He becomes, in a way, a Christ figure himself.

These stories – biblical, historical, and fictional, tell of lives reclaimed by God.  But, what about you and me?  How has your encounter with the Risen Christ changed your life?  Or to put it a bit differently, if you hadn’t met the Risen Christ what would your life be like?

I’ve never had a Damascus Road experience, but I truly believe that had I not experienced a relationship with the Living Christ, my life would be very different.  Although I’ve never lived outside the church, back during my teen years, I struggled with who I was as a person.  I didn’t know where my life was going.  I largely stood on the sidelines during my early years of high school.   When people thought about who in my group would become pastors – I wasn’t at the top of the list.  I may have gone off to Bible College, but I wasn’t first string material.  But, something happened to me and in me that changed who I was and who I would become.  I believe that I am a reclaimed person.  I believe that I’m here today, because of my own encounter with the Risen Christ.

Like Peter, I heard Jesus ask me – “Do you love me?”  When I said yes – with a great deal of hesitancy -- he said, “feed my sheep.”  What I discerned – over time – was a call to use the gifts of God that had been provided me by the Spirit, to pursue the upward call of God and live my life in service to the realm of God on earth as it is in heaven.  This is my story in brief – what is your story?

That is, if heaven and earth are never the same after Christ’s resurrection – how is your life different because of your encounter with the Risen Christ?