The Holocaust and the Sacredness of Life 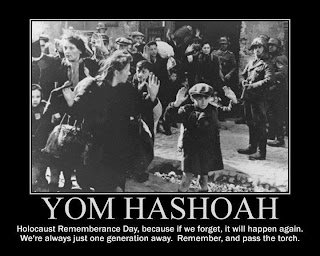 Yesterday -- April 7, 2013 -- the Holocaust was remembered.  Known as Yom Ha-Shoah this day stands as a reminder that humanity can treat one another with great cruelty.   In the 1930s and 1940s there was a concerted effort to exterminate the Jewish people.  Adolph Hitler made this a focus of  his attention.  In order to do this, of course, he had to convince his followers that Jews were not truly human and thus could be done away with.  In the end, some six million Jews were murdered.  Along with them were millions of others -- Gypsies, persons with disabilities, gays and lesbians -- anyone who didn't fit Hitler's understanding of a superior race.

But this wasn't the first time.  Consider the genocide that took the lives of millions of Native Americans.  In part this was due to diseases introduced by colonists to a people who had never encountered them.  But, through enslavement and wars of conquest land and resources were taken -- and the extinction of a people was threatened.

How do we respond?  Valuing life as the creation of a loving God seems to be a good starting place.  If we hold that God has created humanity in the image of God, and that as image bearers, all humans deserve to be respected and treated with dignity, then we have a good starting point.  But then we must ask the question about what this means and requires of us.  David Gushee goes into great detail on all of this in his book The Sacredness of Life.  If we start with the premise that God has created us in the image of God, then we can ask the further question of how we live as this image.  He points us to the prophetic tradition and its focus on shalom.

Shalom means not just rebuilt community but inclusive community.  The egalitarianism and universality that we saw when discussing the image of God surface in powerful new ways here.  Shalom overcomes ethnic divisions as even the "foreigner" who lives in covenant faithfulness before God becomes a full and honored member of the Jewish community.  The eunuch, previously considered inferior and unclean is also welcomed as a full member of the community (Isa. 56:3-6).  All are welcomed on the same basis/ all "who chose the things that please me/for all peoples" (56:7), as all nations will come to worship God in Jerusalem.  Shalom restores the original unity of humankind, at last.  All made in the image of God finally come together in one peaceable human community. (The Sacredness of Human Life: Why an Ancient Biblical Vision Is Key to the World's Future, p. 81).

Yom Ha-Shoah is a call to remember -- to not forget -- so that such a thing will not happen again.  Of
course, we know that it has happened again and again.  It will continue to occur, until we decide to say enough is enough.  May we remember those who died in the Holocaust be recommitting ourselves to the cause of Shalom!
Email Post
Labels: David Gushee Genocide Holocaust Human life Jews Native Americans Sacredness of Life Shalom Yom Ha-Shoah