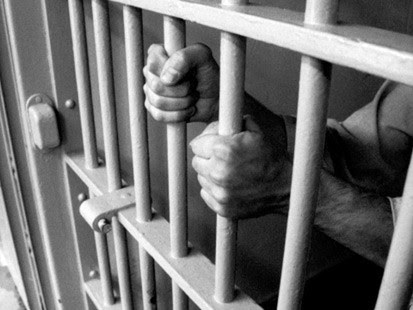 My copy of Time Magazine arrived yesterday.  Among the stories is one entitled "Obama's Legacy Project."  Written by Michael Scherer and Maya Rhodan, it discusses one of the stains upon American life -- our penchant for putting people in jail and then throwing away the key.  In the name of being tough on crime the nation's legislatures, including Congress, have enacted laws that provide for severe prison terms -- so called maximum minimums -- and give judges little leeway in enacting these sentences.  As a result with 5% of the world's population, America has 25% of the world's prison population -- thus my headline.  And 47% of those imprisoned are non-violent offenders -- a great many for drug related crimes.  We spend inordinate amounts of money on what many call the "prison-industrial complex."  Many communities are beholden to the prison industry for their survival.  Therefore there is pressure to build and maintain an ever growing number of prisons.

The relationship of this issue to President Obama goes back to his days as a community organizer in Chicago.  As an organizer, he saw how the criminal justice system impacted the people living on the South side of Chicago, especially those who were poor and including young African American men.  As a legislator in Illinois he helped enact reforms of the death penalty practices and a requirement to videotape police interrogations.  When the President was campaigning for this high office in 2007 he pledged to pursue reform of the criminal justice system, so it would treat all people justly and equally.

The focus o f the article is clemency that he granted to eight persons imprisoned for life due to convictions for selling crack cocaine.  The story focuses on a man named Juan Hernandez, now 37.  At age 21 he was convicted and sentenced to life imprisonment without the possibility of parole for selling crack.  And he is not alone -- thousands of Americans, a majority being African American, sit in our prisons for life for this reason. While he is imprisoned for life, a person convicted of selling powdered cocaine, a product used more by white affluent Americans, gets a twelve year sentence.  Here is the inequity.  Both are cocaine products.  One is cheaper than the other and thus is found in poorer urban areas, and yet it's use is punished with greater harshness than the powder.  Why is that?  Well, it has to do with with economics.  And it also has to do with racism.

The great lockup has taken its toll. The federal prison system alone costs $6.5 billion a year, and the criminal-justice system that feeds it is rife with racial and economic inequities. Black men have a 32% chance of serving time in prison at some point in their lives, compared with a 17% chance for Hispanic men and a 6% chance for white men. And when they are caught, black men are likely to serve longer sentences--an average of 20% longer than white men for the same crimes, according to one estimate by the U.S. Sentencing Commission. The effect of this sweeping policy of incarceration has distorted many American families and communities. In Florida, 1 in 10 adults doesn't get a ballot because of past convictions. Among black adults, who tend to vote Democratic, 1 in 13 nationwide doesn't get a ballot--in some states, including Florida, it's 1 in 5.

As you can see the impact on our communities and the nation is huge.  It destroys families, communities and strips Americans of their rights as citizens, and the affects fall disproportionately on non-whites and the poor.

President Obama and Attorney General Eric Holder have begun to make moves toward changing this reality.  They have begun reviewing drug sentencing laws.  The President took the step of granting clemency to 8 of the more than 8,000 persons imprisoned to life terms for crack cocaine offenses, and in his State of the Union Address called for the reinstatement of voting rights to convicted felons, a step that would affect about six million Americans.   And the Senate Judiciary Committee, led by unlikely allies -- liberal Democrat Dick Durbin and Tea Party Republican Mike Lee, sponsored a bill to reform drug sentencing laws.  It passed out of committee with a 13-5 vote.  If passed through Congress and signed by the President it would call for "judicial review of more than 8,000 crack-cocaine sentences in the federal system, cut mandatory minimum requirements and give judges new powers to grant leniency."

Being a person of faith, a pastor, a follower of Jesus,  and president of a faith-rooted community organizing collaborative, I'm not only appalled at the state of our criminal justice system, but I am convicted by my faith to speak out, for Jesus himself claimed as his mandate:


The Spirit of the Lord is upon me,     because the Lord has anointed me.He has sent me to preach good news to the poor,     to proclaim release to the prisoners     and recovery of sight to the blind,     to liberate the oppressed,      and to proclaim the year of the Lord’s favor.[Luke 4:18-19]

May we also proclaim release to the prisoners and liberation of the oppressed, taking hold of the American mandate that there would be "justice for all."