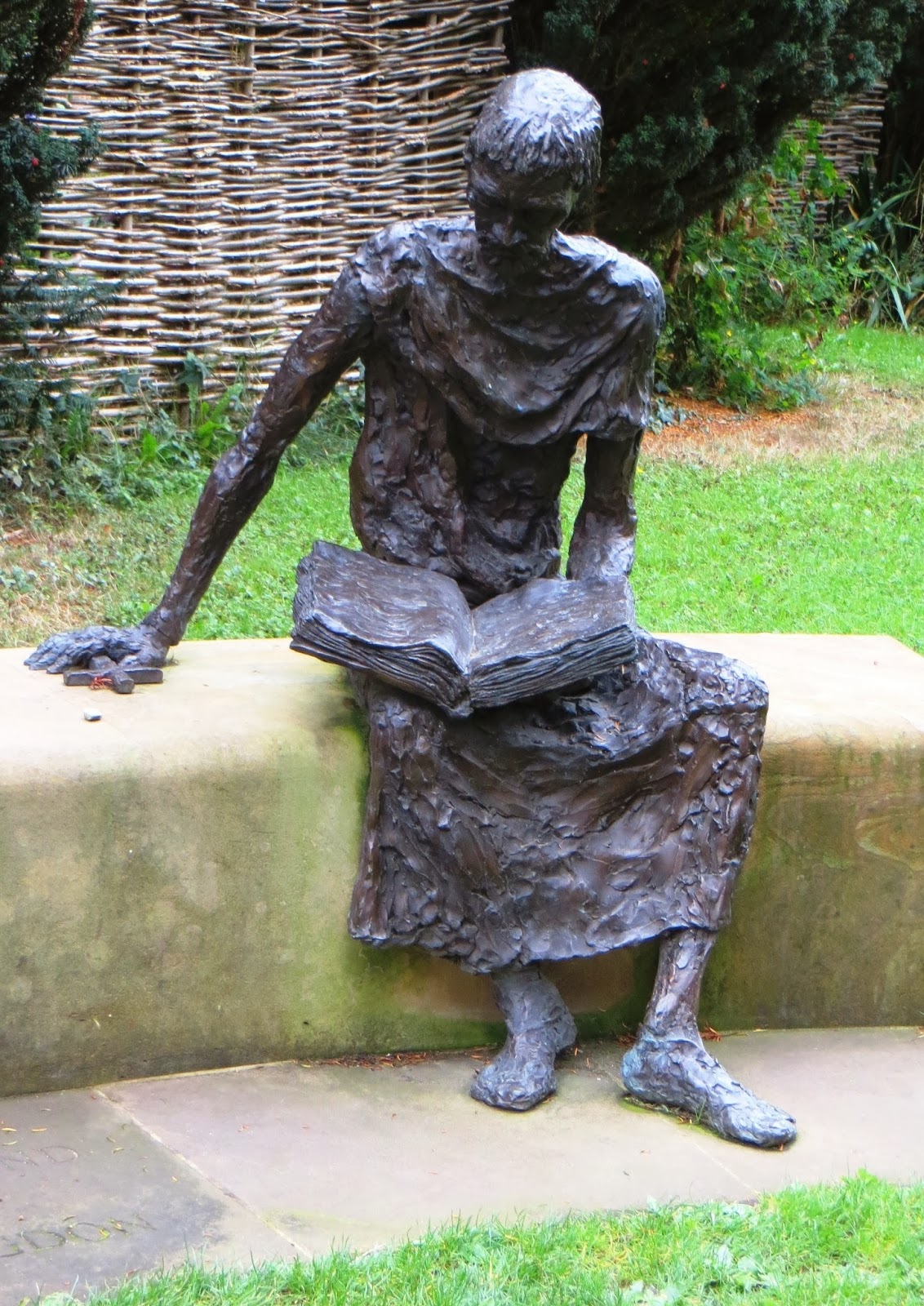 We’ve reached the midpoint of this seven-week sermon series.  My hope is that I can connect our founding visions with our present and future ministry. During my sabbatical I thought a lot about the links between past and present.  Although I believe that we need to keep focused on where God is leading us, I also believe that we can find clues to where God is leading in the past. To put it in biological terms, during my sabbatical I did a bit of research into the DNA of this congregation and my own spiritual heritage. My sense is that our spiritual DNA will help us find our place in the present and in the future.

Although I could have started with the creation story, I think that the best place to start in exploring our spiritual DNA is with the covenant that God made with Abraham and Sarah.  In that covenant God promised that through their descendants, the nations would be blessed.  This founding vision has been meditated to us through Jesus, whom we confess to be the Christ and Son of the Living God.  In the previous three sermons we’ve considered our inheritance, our need to regularly reset current practices and beliefs to our founding visions, and our evangelical call to mission.  This morning I want to reclaim another core value, one that is deeply rooted in our Disciples tradition.

From the earliest days of the Disciples movement we have valued freedom.  Maybe that’s because we were born on the American frontier soon after the nation’s founding. The movement was born during the presidencies of Thomas Jefferson and James Madison.  During this period of the nation’s history, many European-Americans took advantage of the nation’s expanding borders to roam westward.  If your neighbor got to close, you could always move further out into the wilderness.  As the nation pushed outward, churches got planted, and the denominations that were the most flexible in their theologies and practices thrived.  Among these adaptable traditions, was the Disciples movement.  The message they preached focused on a simple creed – that Christ is the center and Scripture is our guide.  This vision is best summed up in a slogan our Founders borrowed from  the reformer Rupertus Meldinius:   “In essentials unity, in opinions liberty, in all things charity.”

I’m not sure that democracy is a biblical concept, but in the heady days of the new American republic, Alexander Campbell embraced these democratic principles, believing that held the key to bringing about unity and spreading the gospel across the nation.  He wrote:

The Campbells and Barton Stone decided that if we’re going to have room to roam then we can’t use creeds as tests of fellowship. Now they didn’t completely reject the creeds, but they didn’t think creeds should be used to exclude people from the community.  Instead of focusing on creeds they directed our attention back to the New Testament.  While the nation set up a legal system to interpret the Constitution, our Disciple ancestors took a more radical step and insisted that every Christian had the freedom to interpret the Bible for themselves.  Or to put it differently – we should let the Bible speak for itself.

This gift of freedom entails a great deal of risk.  It’s possible that people will claim freedom for themselves and not extend it to others.  It’s worth remembering that while the promise of freedom and equality were enshrined in the Declaration of Independence, many of those who signed the document, including the author, owned slaves.  It would take nearly a century before the nation rid itself of this stain, and even after fighting a devastating Civil War that ended slavery, true freedom remained a dream for many.

Although Abraham Lincoln wasn’t a perfect vessel, he understood that a nation committed to freedom couldn’t survive if it was half slave and half free.  Lincoln rooted his vision in the Declaration of Independence.  He believed that this document provided the founding vision for the nation.  In the Gettysburg Address he returned to this founding vision and reclaimed its promise of freedom and equality for all.

There is another source of Lincoln’s understanding of freedom – his reading of Scripture.  Lincoln never joined a church, but he had been an avid reader of the Bible since childhood and he regularly attended Presbyterian churches. As to why he never joined a church, Lincoln replied that he would join the first church that made as its sole qualification for membership Jesus’ summation of the Law – that we should love God with our heart, soul, and mind, and love our neighbor as we love ourselves.  Our founding pastor, Edgar DeWitt Jones, who was an avid student of Lincoln’s life, shared this word in a sermon:

It may be said by way of comment on this quotation that the statement of Jesus with respect to the law and the gospel is written on the altars of all the churches, but so much else is also written there that is secondary and relatively unimportant that the fundamental teachings of Jesus are obscured. [Jones, Sermons I Love to Preach, (Harper, 1953), p. 141.]

Our Stone-Campbell founders dedicated themselves to removing as much as they could the stuff that obscures the biblical message. They weren’t completely successful, but their commitment to freedom of interpretation serves as a reminder that we need to regularly clean out our theological closets and reset our vision to the vision laid out in God’s covenant with Abraham and Sarah and developed further by Jesus.

Yes, we are free in Christ.  As Paul told the Galatian church, which was struggling with standards for membership: “For freedom Christ has set us free.  Stand firm therefore and do not submit again to the yoke of slavery. (Gal. 5:1 NRSV).

Christ has set us free to be his disciples.  We’ve been invited to follow him and bring the good news of God’s realm to the world.  There is freedom here to explore matters of faith and to learn what it means to be a follower of Jesus.  When Lincoln laid out his own creed, he sought one that could unite rather than divide.  That is, I believe, the quest that our Disciple ancestors set out on two centuries ago.

Consider that when someone joins this congregation, we simply ask that they confess Jesus as the Christ, the Son of God, and affirm him as Lord and Savior.  As you can see, this simple creed leaves room to roam.  Some of us take a more minimalist view, and others a more expansive one.  But, whether we have low Christology or a high Christology, we are one in Christ.

One of the reasons why I’m a Disciple is this openness.  I appreciate the room we have to roam theologically.  But freedom to roam doesn’t mean that there are no limits.  We may differ in our Christology – that is our understanding of who Jesus is – but we have all confessed Jesus to be the Christ.  He is the center of our life together; the glue that binds us to one another.

We are free in Christ, but with this freedom comes responsibility.  Paul tells the Galatian church to “not use your freedom as an opportunity for self indulgence, but through love become slaves to one another” (vs. 13).   We are free in Christ, but that freedom involves loving our neighbor as we love ourselves.  This is the way of Jesus.  It is the way of true freedom in Christ.

We are free and yet we’re to be slaves to one another.  This seems like a paradox.  Thankfully, Richard Rohr offers us a bit of help in making sense of this paradox.

The reason we can move toward real freedom is because we started with moral laws and clear expectations from authority figures, which put good and needed limits to our natural egocentricity. [Richard Rohr,  Things Hidden: Scripture as Spirituality, (p. 80). St. Anthony Messenger Press. Kindle Edition. ]

When we’re children, our parents set boundaries.  As we mature, we gain more and more freedom.  The way we exercise this freedom, however, is constrained by the inheritance we receive from Jesus, who showed us that the way to God is to love God with our entire being and to love our neighbor as we love ourselves.  Upon these two commandments, “hang all the Law and the Prophets” (Matthew 22:34-40). If we embrace this vision, then we will become agents of blessing to the nations.