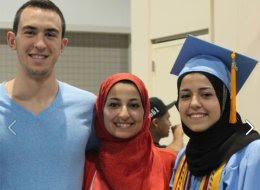 By now most have heard the horrific news from Tuesday.  On that day, in Chapel Hill, North Carolina, a man entered the apartment where Deah Barakat, 23, Barakat's wife, Yusor Abu-Salha, 21, and Yusor's sister, Razan Abu-Salha, 19, were living and shot and killed them in apparent execution style.   Deah was a a dental school student at the University of North Carolina, where his wife of only a few months Yusor was intending to matriculate in the fall. Yusor's sister Razan, who was living with them was a student at North Carolina State University.  That the perpetrator of this crime shot the three in the head is suggestive that this was conceived with malice and forethought.

From what I've heard these three Muslim young people were wonderful people.  They were full of life and were committed to helping others.  They're the kind of people you want as neighbors. They had much to live for and will be deeply missed by family and friends.  This is a sad day for these families and for the communities in which they lived, especially the universities where they studied.

It is also a moment of great anguish and even fear within the Muslim community in America.  We hear much anti-Muslim sentiment in our nation. The welcome mat has been withdrawn. People are threatened, their homes, businesses, and places of worship targeted for vandalism.  That some who claim to be Muslims perpetrate violence does not make all Muslims violent. Hopefully the same is true of the Christian community.  That some perpetrate violence in the name of Jesus (both physical and verbal) doesn't mean we're all like that.
So, why did this heinous murder take place?  We don't know all the details.  Some have suggested that this has its origins in a dispute about parking spaces.  That sounds fishy to me.  It seems to me that such a story is meant to give cover against the possibility of designating this crime as a hate crime.

What is a hate crime, you may ask?  Here is a pretty succinct definition:

A hate crime is usually defined by state law as one that involves threats, harassment, or physical harm and is motivated by prejudice against someone's race, color, religion, national origin, ethnicity, sexual orientation or physical or mental disability.

Usually a hate crime designation stands on top of an underlying crime -- in this case murder -- and usually adds penalties on top of the underlying sentence.    A hate crime is designed to send a message either to the people who are victimized or to others like them.  There's another word for this -- it's called terrorism.  Terrorism is designed to send messages to people.  You probably haven't heard that word used in this case, but why not use it?

So was this a hate crime?  We don't know all the facts yet, but from early reports such a designation seems appropriate.  How do we know?  Well, the perpetrator has a known history of making anti-religious statements, especially against Muslims and Christians.  That he entered their home and shot them execution style is also suggestive of such an intent.  It wasn't as if they were in an argument in the parking lot and he pulled out his gun (for which he has a concealed weapon's permit) and in the heat of the moment shot them.  No there was something more going on here.

What is interesting about this set of murders is that it comes right after President Obama's National Prayer Breakfast speech in which he noted that people from every religious tradition have engaged in horrific violence and have justified this violence under religious doctrine. What this event reminds us of is that people who claim to be atheists can also engage in horrific violence.  Hate is hate, no matter how it is defined or justified.

Let us remember these young people by committing ourselves to building bridges of understanding that we might put an end to violence. Most of all, let us grieve with this family as they grieve their losses.
Email Post
Labels: atheism Grief Hate Hate Crimes Healing Islam Murder Religion and violence Remembrances terrorism

Steve Kindle said…
Bob, could you talk about the fact that the non-hierarchical and egalitarian nature of the church are taught both by Paul and Jesus long before the notion of the Trinity emerged. IOW, where is the dependence?
12:20 PM

Robert Cornwall said…
Steve, of course I would argue that Paul did have a proto-Trinitarian theology. What Elizabeth Johnson and Catherine LaCugna argue is that the Arian position is monarchian and hierarchical, and that the relational nature of the Trinity as understood by Augustine and the Cappadocians is by nature egalitarian. I would encourage reading Boff on the Trinity -- most enlightening.
2:06 PM

Steve Kindle said…
I love Boff. And I've ordered Johnson and LaCugna and hope to be enlightened.
Monarchian and hierarchical, eh...you mean like "Jesus at the right hand of God"?
5:15 PM