The Wisdom of Creation -- Speaking of God Sermon Series

“In the beginning was the Word, . . . All things came into being through him, and without him not one thing came into being” (John 1:1, 3).  And Holy Wisdom declares:  “The Lord created me at the beginning of his work, the first of his acts long ago . . . then I was beside him, like a master worker” (Proverbs 8:22, 30).  Both Word and Wisdom are expressions of God’s nature and are partners with God in the work of creation.

Some in our society believe that one cannot be both a Creationist and an evolutionist. They say that we have to choose – God or science. For the past ten years I have been involved in an effort to counter that belief. For ten years I have invited the congregations I served to observe Evolution Sunday on a weekend near the birthday of Charles Darwin. While we didn’t get a birthday cake for Charles, we are joining hundreds of faith communities across the country and beyond by worshiping with Charles Darwin.

It is appropriate – might we say providential – that Evolution Sunday is falling  right in the middle of my “Speaking of God” sermon series.  After all, how can we talk about God without talking about God as Creator?

Proverbs offers an intriguing statement about God and creation. In this passage of Scripture Holy Wisdom is speaking, and she speaks of her role in God’s work of creating the world in which we live. There are two words that stand out in this hymn, and they are “rejoicing and delight.”

If you look at the universe through the Hubble Telescope, you might see stars and solar systems in formation. A scientist might take measurements, trying to figure out the age and distance of the stars and planets they see.  Since astronomers have found planets circling the stars, it is natural for them and us to consider whether they harbor life. If they do, is it “intelligent life?” Maybe the inhabitants of these far-flung worlds even speak English like they do on Star Trek or on Stargate SG1!

The theologian, and remember we’re all theologians, might look through the telescope and see something very different. They might get a sense that God is a lot bigger than they had imagined.  Or maybe they experience a certain spiritual awakening by getting in touch with mystery that these pictures instill. Maybe, they will break out in songs of praise to God for creating such beauty. Of course you might be both scientist and theologian and have both kinds of experiences. 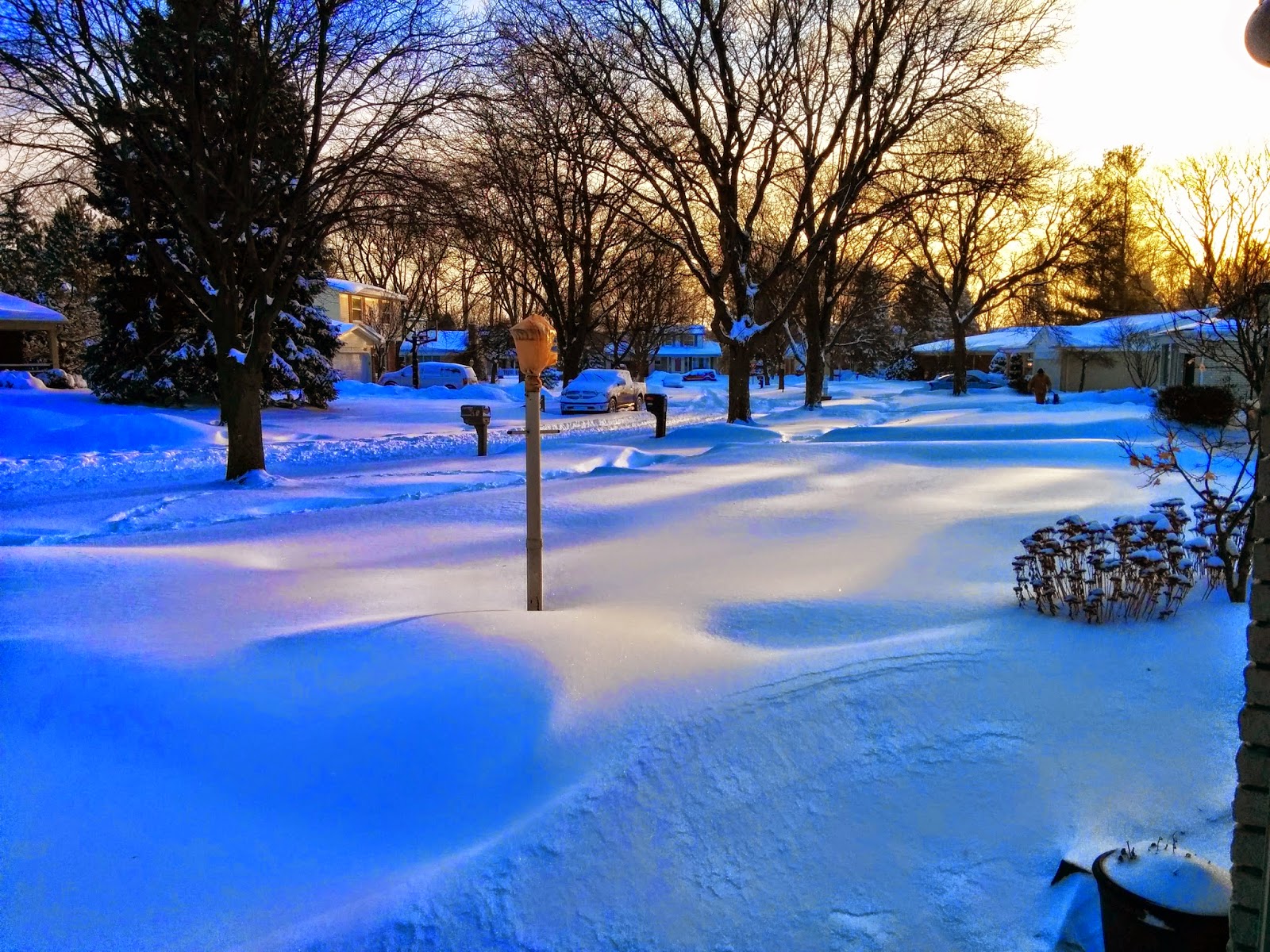 But you don’t have to go out into space to have such experiences. Just think of a snow scape, like the ones we may have experienced this past Monday – when we couldn’t get out of our driveways. Before the family shoveled out the driveway and sidewalks on Monday, I took a picture of the snow that covered the yard. You may have seen it on Facebook or on my blog. The camera caught a moment in time when light and shadow mixed upon the snow to create a beautiful image. There is probably a scientific explanation for that picture, but there is also a spiritual one.

In Proverbs 8 we’re told that the world around us is a product of divine wisdom. There is a certain order to the world and the universe. Mountains have been shaped and the boundaries of the seas have been set.  Being that Holy Wisdom was the first act of creation, she serves from then on as a wise architect  assisting in the act of creation.  The result is something of great beauty and great worth.  Yes, this creation that we inhabit is something to enjoy and celebrate.

Each of us has that special place that stirs feelings of joy and delight.  I remember our first full summer here.  We were going up north and everyone told us to go to the Sleeping Bear Dunes.  We followed this advice then and since.  There is indeed great beauty to be seen in the way the white dunes meet up with the deep blue of the lake.  While the dunes were created by the winds that blow across the lake that doesn’t take away from the sense this scene reflects the glory of God.

Yesterday in the memorial service Kate spoke of being co-creators with God in the creation of a family and human life.  Now we were sharing in a service of remembrance because a little life growing in the womb passed into the presence of God before joining us on the journey of life.  But pregnancy and birth is an act of creation in which we as humans get to participate with Holy Wisdom.
While science tells us certain things about the universe, it doesn’t tell us everything.  Although God doesn’t fill in the gaps left by science, as a person of faith I know that there is something deeper at work in the universe, and we have come to recognize that something to be God.

As we have been thinking about the ways we talk about God, I’ve been introducing some insights from feminist theologian Elizabeth Johnson. She offers this word of insight that seems to fit the moment.

All creatures are siblings from the same womb, the brood of one Mother of the Universe who dwells in bright darkness.  In her, as once literally in our own mother, we live and move and have our being, indeed her offspring (Acts 17:28) [She Who Is, p. 179].

Evolutionary science tells us that all living things share a common ancestor.  From one celled creatures to modern humans – there is a connection. We’re all siblings who have emerged into life from a common Mother – the Creator, the Wisdom and Word of God, whom we meet in Jesus, and in whom we live and move and have our being through the Spirit.

I don’t know about you, but I find it kind of exciting to know that our family tree might be as big as the universe itself!

Science offers us a picture that is at once beautiful and mysterious. When I watch a nature program, I sometimes find myself repulsed by the way nature works.  Predator and prey.  And yet there is a certain order to all of this.  While the prophets envision a time when lamb and lion will lie down together, at this moment in time the lion’s survival is dependent on taking the life of that lamb.  So, from a certain perspective, perhaps we can even take delight in that – for this is the way the world exists.  Everything has its place and its purpose.  Even the duck-billed platypus has its place in the universe.

One of the insights of modern science is that the universe continues to expand and that new stars and planets are being created. Evolutionary science also tells us that life on earth continues to develop.  In response to these insights, we have begun to recognize that God isn’t finished creating. God didn’t just speak everything into existence, and then retire to Boca Raton. That means God is still at work in the universe, interacting with it, and guiding it toward its wise fulfillment.

Scripture speaks of God the Creator and we are invited to do the same. As we take in the complexity of the world around us, which science helpfully describes and explains for us, may we join with God in taking delight in what we see and hear and experience.  Yes, in God who is Holy Wisdom, the womb of life and source of being, we live and move and have our being.  Thanks be to God!