The Church in Exile (Lee Beach) -- A Review 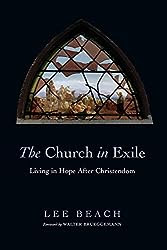 The age of Christendom is rapidly coming to an end. In fact, we are living in a post-Christendom world.  Christianity remains the largest religion in the world, but the former heartland of Christianity – Europe and North America is rapidly become more secular religious. Churches still exist and shall exist for the foreseeable future, but they no longer hold positions of honor and influence in our culture. Younger generations are either fleeing our churches or never entered them to begin with. For religious professionals, which includes me, it is almost as if we’re outposts of the Pony Express watching as the telegraph poles are being put up across the landscape. These are difficult times for the church. But this new post-Christendom age offers potential opportunities, if only we’re willing to open ourselves up to them. We may not have a seat at the table with the movers and shakers, like we once did, but maybe that’s a good thing.

Where does the church in the twenty-first century North America find itself?  What images describe our realities? One image that has taken hold and has potential to ignite our prophetic imagination, to borrow a phrase from Walter Brueggemann, who pens the foreword to this book by Lee Beach, is that of exile. To live in exile is to live apart from familiar surroundings. You might not have control over your lives and destiny. There is a certain transience about exile, and yet it is often a time of refinement and rethinking one’s place in the world. These was definitely true for the people who inhabited the kingdom of Judah in the sixth century BCE. Their kingdom may have been small, but it was theirs. They had a Temple and a monarchy, but all of that went away when the Babylonians came to town, laying waste to the Temple and the city of Jerusalem, and carting off the king and the upper crust of the community.   The question they faced as a community was whether God was still with them, now that their Temple was gone and the leading citizens lived in a foreign land.

It would seem that we find ourselves in a similar position. We are forced to ask the question whether God is still in our midst as our power and influence in the community recedes. We may feel like we have been abandoned.  Or, taking our cues from biblical stories of exile, we may find a new vision for the church in the world, one that is not wedded to power but truly dependent on God.

The image of the church in exile is taken up by Lee Beach, an assistant professor of Christian Ministry at McMaster Divinity College in Hamilton, Ontario, Canada, as an image of hope for the church.  Even as God was with the exiles in the biblical story, God is with us as well as we enter this new post-Christendom era.  While Beach uses the image of exile to stir our prophetic imagination, Walter Brueggemann points out that the texts he chooses actually emerge out of the Diaspora. The difference between exile and Diaspora, is that with exile there is an expectation of a return to normalcy. With the Diaspora, there is a new normalcy of living and practicing one’s faith far from home. Brueggemann writes that “’Exile’ might be a hope of ‘recovery’ for the way the church used to be, whereas ‘Diaspora’ is a recognition that there will not be any return home and there will not be a recovery of any old normalcy” (p. 12).  Thus, while the term exile is used here, there is clearly a sense in this book that we will never return to the former “normalcy.”

With Brueggemann’s helpful caveat in mind we are ushered into Beach’s provocative exploration of the biblical story of exile and diasporas, old and new, which is divided into two parts.  The first part focuses on the development of a theology of exile, with special attention given to Esther, Daniel, Jonah, the ministry of Jesus, and the wisdom of 1 Peter. One of the key points in expositing the idea of exile is that God is to be seen as present on foreign soil. The earlier symbols of divine presence – the land, the Davidic monarchy, and the Temple were gone. These markers of their identity as a people had been stripped away from them.  But in the midst of their despair came assuring words of hope from the prophets who declared that God had not abandoned them.  If this is true, then they must attend to holiness and mission. The biblical stories that emerged, including those of Esther and Daniel demonstrated that Jewish men and women could “thrive in their displaced context and even rise to places of significant influence” (p. 66).  It is important to note that even though Beach is an evangelical he understands that stories such as Esther and Daniel may be fictional in nature, but are designed to give advice/wisdom to people living in foreign lands, but seeking to be faithful.  Thus, they are much like parables.  Jonah represents a somewhat different focus, as in this story the prophet seems unwilling to give a hated enemy the opportunity to repent and receive the mercy God desired to show to the Ninevites.   Christians, Beach suggests, have the opportunity to learn from these advice tales about who we are as well as who God is in the context of our situation in the modern Western world.

One of the primary lessons we learn from the three Old Testament stories that emerge out of the Diaspora, is that at least for Esther and Daniel, it is possible to adapt and assimilate into a culture without compromising one’s faith.  By doing so, they offer a witness of faithfulness to God (even if the name of God is never mentioned in Esther).  While the books of Nehemiah and Ezra, addressed to returned exiles, condemns intermarriage, Esther uses her marriage to the Persian king to benefit her people.  Beach interprets the story of Jesus in light of Second Temple messianic expectations, including stories found in Enoch. Jesus becomes the image of restoration, so that exile concludes in his life and ministry. The messianic hope has arrived. This is picked up in 1 Peter, which pictures the church as being the new Israel. The church is a spiritual house, and a kingdom of priests. With this new identity the Christian is to embrace holiness and mission in the world, which is expressed “primarily in the context of social relationships characterized by mutual submission” (p. 131).  While many read the household codes in a hierarchical manner, he sees them as a call to subvert the normal ways of living by balancing calls for submission on both sides – husband/wife, master/slave, parent/child.  Thus, 1 Peter serves as an advice tale for the church.

Having laid the theological foundations by examining the witness of Diasporic advice tales and the New Testament witness, Beach begins to lay out the practical implications of this theology. He speaks of the call to leadership and the importance of leaders to engage in prophetic imagination. In this new context leaders need to define reality – being honest about where we find ourselves.  It does the church no good to continue reassuring the people that given time we’ll get back to the age of Christendom. With this the imagination can be unleashed to create new ways of living and doing mission.  This will require a responsive theology, one that addresses new realities – as Peter discovered in his encounter with Cornelius. Our theological work involves accommodation without compromise (as is seen in the story of Daniel).  Orthopraxy becomes central, rather than orthodoxy.  This effort requires attention to holiness.  By holiness he means keeping track of the difference between accommodation and compromise. It means living in the world, but not letting the world define our values and practices. This leads to mission that is defined by relationships. As an evangelical, he reminds us that part of mission is evangelism. The book moves toward its primary point and that is this – the hope we take hold of is one of restoration.  While we will never return to the old normalcy, there is an eschatological vision that is rooted in God’s vision of a new heaven and a new earth. It is a vision of a better world that is to come, but which God is already seeding in the present. We get to participate in this work!

This is a call to embrace our new reality, one of displacement and marginalization. That sounds like bad news, but in reality it is good news because we can put our trust and find our identity in God and not our place Christendom, which is really a false hope.

To embrace exile and Diaspora allows us to take up an eschatological vision of hope. It is recognition that the current reality is not the final reality, but at the same time it is not a call to abandon the world, but instead serve as agents of reconciliation and transformation.   This is a book written from an evangelical perspective in dialogue with one of the most important progressive Christian scholars (among others). Since the image of exile should be a most useful one of the church going forward, this should prove to be a most useful guide to that journey.  Whether one is evangelical or not there is much here that will help us find our place in the world, and even help us take up positions of influence where and when possible, even as we recognize that the surrounding culture cannot and will not do the work of forming disciples for us.  That is our job!
Email Post
Labels: 1 Peter Books Christendom Church Church and Culture Daniel Esther Exile hope Jonah Lee Beach Missional Reviews Theology Walter Brueggemann