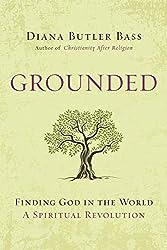 On Monday I posted a lengthy review of Diana Butler Bass's wonderful new book Grounded: Finding God in the World - A Spiritual Revolution. I will admit to have struggled with the book and that came out in the review (perhaps a bit too strongly). Nonetheless, I am in large-part in agreement with the premise of the book. The premise is this, if we're focusing our attention on the institution and its welfare we've missed the point of faith, which is God.

Now, as I noted in the review due to my current context as a pastor of a small mainline congregation that struggles to connect with the world, I like many colleagues tend to ask what may be the wrong question -- how will this help the church?  My situation may not be unique, but there is an added element to my story. You see, a very long time ago my church was one of the most important in the denomination. The pastors were celebrated preachers and leaders. Times changed and by the late 70s we had left our  neo-Gothic cathedral for smaller digs in the suburbs. There aren't many left in the congregation that remember what was, and so its hold in the imagination continues to decline in its power. But even this building, at least the sanctuary, feels empty on a Sunday morning. We think we have something to offer, but we're not connecting.  In a conversation with Diana since I posted the review I used the image of an antenna, suggesting that those seeking God, the ones  who in previous years might have sought out a more progressive church don't have their antennae up so we can connect. Later I realized that a more adequate analogy might be frequency. We're not broadcasting on the same frequencies. So, maybe we need to change our frequency rather than expect them to change theirs.

While I believe that the church has a role to play in the work of God, I know that God is not limited to the church (the reason why I can't get on board with Scot McKnight's recent work that in my mind overly connects the kingdom of God with the church). Like Diana I believe that God loves the world (the whole world) and that God is at work reconciling that world to God and to itself.  With that in mind, there is a piece in the book, reflecting on the message of John 3:16 that I think is poignant for our times.

John 3:16 is not a call to personal salvation or revivalist fervor. Instead,  it offers a glimpse of Christianity's central cosmology. The emphasis is on the first line, and the verse essentially says, "God so loved the universe, that God entered the cosmos in the form of a gift, the gift of Jesus, that we might trust in this divine presence and experience abundance. It is not a story of getting saved from hell unless that hell is the one we are making through our destruction of the atmosphere. Rather, it is the Christian way of saying that God dwells in the universe we also inhabit, that we might experience the life of heaven here and now. [Grounded, p. 122]

Diana takes note of an assessment of the message here by a Danish theologian who speaks of this as "deep incarnation," even using Lutheran eucharistic language to describe this reality as "the manifestation of God 'in, with, under, and as' flesh."

Where is God? Well God might be found in places we're not expecting.  Diana writes that "In Christian theology, Jesus brings together sky and earth, the God who dwells with us, John 3:16 proclaims that this divine indwelling is life. Other religions say similar things in different ways -- God is closer than we imagine, and the ever active spirit is animating the world."  [p. 123]

I'm still trying to figure out what all this means, but  since this is an important conversation, there is more to come! If there is hope for the church, then that hope will likely come from being grounded in the God who is to be found in the world and not locked behind the church doors.