Here I Am (Grace Ji-Sun Kim, Editor) - A Review 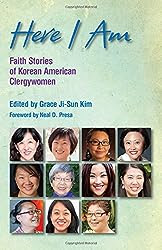 Each of us have stories to tell, and each story has a context. I am, for instance, a white straight married male Protestant clergyman living in the United States. That’s not my entire identity, but these are key markers. My experiences in life will be different from a Korean American clergywoman. One major difference is that society is more likely to accept my identity as a member of the clergy than a Korean woman. Indeed, to be a woman in a Korean context is to flout expectations, even more so than for a white woman. To hear stories of call and ministry is illuminating, if we’re willing to listen closely.

Here I Am is a collection of stories. They are enlightening, though they’re not always happy stories. In many cases these are stories of survival and perseverance in the face of difficult cultural challenges. To be Korean in America presents one set of challenges. To be a woman called to ministry in a Korean context presents another set of challenges. I was invited to read these stories by the editor, Grace Ji-Sun Kim, whose book Embracing the Other I had recently reviewed. She asked her publisher to send me a copy, for which I’m thankful. So, I want to thank Grace for entrusting these stories to my care. Having the opportunity to read them has been an enriching experience.


The book is a collection of essays written by Korean American Presbyterian clergywomen. The stories are personal and theological. Some are homiletical. Indeed, the third section of the book is comprised of sermons, which in themselves are revealing of identity and call. Throughout the book the contributors explore the dynamics of being women and Korean. They face the reality that the broader society sees them as different, even foreign. At the same time, they face the challenge of a highly patriarchal Korean society. One element of the story that I had not even thought of concerned the role of Confucianism in Korean culture. It’s not Confucianism as a religion, but as a worldview. Having recently read a book that suggested the value of a Confucian form of Christianity (Confucius for Christians by Gregg Tenn Elshof), I was introduced to a different side of the issue. What I discovered from these essays is that Korean Christians find it as difficult to disentangle Christianity from Confucianism as European American Christians find it difficult to separate out the European cultural elements that have been embedded in Western Christianity. With these cultural issues in mind, I discovered that the hurdles placed before these women are exceedingly high. Much higher than hurdle I may have faced along the way toward my own ordination. Even after ordination, the road doesn’t always get easier.

Even as the Korean context presents difficulties, so do the American cultural dynamics. Since being white is often equated with being American, a person of color, especially a person of Asian descent, will often be seen as the other. To be Korean and American means dealing stereotype. Indeed, it means facing the reality that one will be perceived as a perpetual foreigner. People will be surprised at how well you speak English, even though English might be your primary language. These challenges are dealt with in some detail by Grace Kim in her chapter in the book. She writes that "minorities are always asked to define themselves or are identified with some form of adjective, while white, European Americans are never asked to define themselves" (p. 52). Other chapters deal with what might think of as the mundane. Mihee Kim-Kort, for instance, speaks of the relationship of parenthood to vocational ministry. Others tell of specific ministries to which they’ve been called, including a most intriguing ministry with the homeless.

The book falls into three parts: Theological Reflections, Korean American Theology, and Korean American Sermons. The book is introduced by Grace Ji-Sun Kim, who sets the stage for the conversation. Kim writes:

We hope, by the power of the Holy Spirit, these simple offerings will encourage people to stand up against injustices of racism and sexism that manifest themselves in overt and subtle ways. Racism and sexism are problems our churches need to address and we need to help dismantle (p. 6).

That is the primary thrust of the book. By telling stories, racism and sexism in church and society are revealed so that they might be dealt with.

The writers of these stories are members of the “Korean American Presbyterian Clergywomen,” an association of women clergy for support and encouragement. The story of this organization is told by Unzu Lee. The organization is small—there are only about ninety ordained Korean-American Presbyterian Clergywomen. Hopefully in time these numbers will climb!

Being a preacher and a theologian myself, I was intrigued by one of the sermons. Yena K. Hwang preaches from Ecclesiastes titled "Discerning Kairos." I appreciated how she contrasted kairos and chronos, the two Greek words for time. Kairos is God's time. In a series of contrasts between the two, I appreciated this one, because it speaks to our time: "In chronos, the Roman Empire overpowered the people of God, but in kairos, God sent a servant leader who could not be overthrown by any human authority" (p. 149). In this there is hope.


Memoirs, theological reflections, prophetic preaching—all are to found in this collection of essays. I may not be Korean or a woman, but I found these essays to be instructive and enlightening. I heard in the words of these women a call to embrace the other. I heard a call to allow these encounters to transform me as a pastor and as a Christian. Yes, these are Kairos stories offered to the church that the church might be transformed.
Email Post
Labels: Books Confucianism Foreignness Grace Ji-Sun Kim Korea Korean Culture Ministry Presbyterians Reviews Women and Ministry