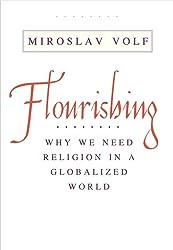 I write a lot about religion and public life. I've written book titled Faith in the Public Square. I've been active in a variety of public roles as a Christian. I believe that religion has role to play in public life, but it needs to walk a fine line.  The danger that faces people of faith is getting too closely aligned with the state, lest one becomes a tool of the state!

I am currently reading Miroslav Volf's new book -- Flourishing (Yale, 2016). I will be reviewing the book at a later date, but I would like to share this piece with you.  He notes that there have been in recent years attempts to strengthen ties between world religions and the political order. We see this in the Christian Right, Political Islam, and elsewhere.  The problem is that such attempts to connect the two usually leads to religion becoming subservient to the state and a loss of identity. They simply become tools of the powers that be.

However, if religion is "decoupled from the state, religion need not be privatized; emancipation of the state from religion doesn't spell the end of the political influence of religion." In fact globalization has the possibility of creating a more pluralistic context where religion and government interact in a more healthy way.  So he writes:

The great opportunity for world religions today is to give up the self-betraying, violence-inducing, and futile dream of each in association with the state controlling public life and instead embrace social and political pluralism and the public role available to them. In seizing this opportunity, globalization is their ally (even if in other  regards it may be their rival). It is helping religions free themselves from the false alternatives of either being personal but publicly inconsequential or publicly significant but politically authoritarian. It is strengthening the possibility for religions to be personally appropriated, publicly engaged, and politically pluralistic all at the same time. [Volf, Flourishing, p. 87].

Religion can be a destructive force in the world, but it need not be. For it to be constructive we who are part of the religious community need to recognize the pluralism in our context. We can't impose our vision on others. We can only persuade, and persuasion must be honest. No slight of hand here! Let us then embrace our role with humility and respect for others.
Email Post
Labels: Faith in the Public Square Miroslav Volf Pluralism politics Privatized Religion Religion Religion and Politics