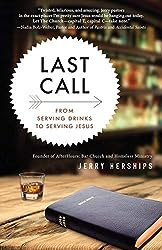 God gives differing gifts to different people. We’re all empowered by the Spirit, but not all have the same ministries. But in the end the point is the building up of the body of Christ. That's the message that Paul gives to the Corinthians. Jerry Herships is a gifted emcee for Jesus, and that is the story he tells in Last Call. The book under review is a memoir of a call to ministry, a unique path that leads to a somewhat unique form of ministry.

In Last Call Jerry Herships tells how he got from Detroit, via Cedar Point, Los Angeles, and Orlando, to Denver, where he became an ordained United Methodist pastor of a unique community set in bars with a focused ministry with the homeless. Herships had honed his skill set for ministry over the course of time as an emcee, comedian, and bar tender.  A substantial portion of the book is focused on his journey from being an emcee at Cedar Point through his various jobs with comedy clubs, amusement parks, and bars. It appears that even though he wasn’t the best comedian (not that funny), he could introduce others.

Throughout the book there is a tension between his work life and church life. He grew up Catholic in Detroit, even wanted to be a priest for a while, but ultimately chose another course of life (in part because he liked girls and thus celibacy was an issue). As he entered the entertainment world, achieved some success, and sought fame, religion became non-existent. Though he seemed to want a connection with God, whom he believed had gifted him for this sort of work. That story continues on for a number of chapters until he gets to Orlando and ends up in a United Methodist Church, and finds himself pulled into ministry.

For some reason, never really stated, Herships decided to move to Denver and attend United Methodist related Iliff School of Theology. Off we go to Iliff, where Herships admits he’s not much of a student. Indeed, he confesses to have read very few books before going to seminary. The skills valued at seminary were critical thinking, reading and writing. The skills he had learned in life were more social—how to communicate, network, etc. What he was good at was innovating, though he felt that seminary didn’t value that skill. Of course, the skill set developed over time did benefit him in ministry, they just weren’t the skill sets taught at seminary.

During his time in Denver he became a member of staff of a large suburban church, working with young adults. He was successful at that, but felt drawn to doing something different. That led to ministry in bars and with the homeless. The final chapters of the book focus on the After Hours ministry that he developed that involves serving communion and lunches to the homeless in a park followed by some form of worship at bars. Herships admits to a love-hate relationship with the church. He values church, even suburban churches, in part because his own move to ministry was facilitated by such churches. But at the same time, he’s not sure about the future of church. He’s not sure that the focus on buildings, staff, and programs are workable long term. He may be right. It is true that churches are in decline and the under 35 crowed seems less interested in traditional religion, but we don’t know the long term future.

Herships raises important questions about the mission of the church. Like others, including those who endorse the book (Doug Pagitt and Nadia Bolz-Weber), he challenges what he perceives to be the inwardly focused nature of much mainstream Christian life. He has had experience in big suburban churches, which helped support and encourage his ministry, but he's not exactly excited about such ministries. He seems to like good preaching, but isn't so sure about the rest of traditional worship. It would appear that worship in the bar is more emcee-led with secular music rather than church music. I would like to have seen more focus on this ministry, which is quite innovative, and perhaps less of the story to get to that point. At points you get the sense that he wants to make sure you know that he was really successful in the entertainment world, as well as a motivational speaker.
The book is easy to read. You move quickly from one story to another. Herships life in the entertainment world holds your attention, though it could have been tightened up. He may never have been the main event, but he rubbed shoulders with Leno and Seinfeld, and that's good enough for most of us. Now his focus is on feeding the homeless. He understands that he's not changing homelessness, but as efforts are underway in the community to address some of these problems, he gathers people to offer PBJ sandwiches and communion to the homeless in the park.

As I’ve noted there’s a lot of critique of the traditional church. It doesn't meet his needs. He prefers a different venue. Obviously there are others who feel the same, and he is attracting them. Many are under 35 and are more attracted to service than to bible study and worship. That's understandable. There is a place for such kinds of churches (he's bemused at the fact that many colleagues won't acknowledge his community as church, but only as a ministry). I find it interesting that the United Methodists, a tradition that has a significant temperance component to it (at least in earlier years), is supporting ministry in bars. I’m not sure that Herships sees the irony here. At the same time, as he hints, much of the support financially for the ministry comes from the churches he critiques as being irrelevant. He talks a lot about authenticity and transparency. These are buzz words today. Yes, young people want authenticity, but I think we all do. I also think we all like to have an air of respectability to us as well (at least most of us do).

Here's my critique, and it probably says more about me than him. I'm not prudish and I'm not given to being holier than thou, but I was raised to refrain from using certain kinds of language. He admits regularly that his "potty mouth" might not be his best quality, but it’s there throughout. And, well, I guess old fashioned, about such things. While it seems that what we used to call swearing is in these days, I’m not sure that this is a true sign of authenticity. At least it wouldn't be for me. That said, I think the book offers us insight into ways in which the church can be in mission.

As the book ends, in the last full chapter, Herships talks about the power of communion. I think this was the most compelling part of the book for me. Jesus was known for his Table Fellowship. Communion can be a powerful witness of the presence of God in our midst. His discussion of how people's lives were touched as the received the elements of communion in the park was powerful. Most of those who received the elements wouldn't enter a church, but found grace in these elements shared in the park. I'd like to know more, for I too believe that communion has a missional component.

At points I got the feeling that Herships feels that his vision is superior to others. He doesn’t have a lot of patience for buildings and such. I understand that. I’m just not sure it has to be an either/or. Then again, I’m the pastor of a church with a building that needs to be maintained. I also like good church music!  There is a place for Herships vision of ministry, and I do think that After Hours is church. There is also a place for a church like mine, even as it seeks to find its way into the future. With differing gifts, we will all have differing ministries!
Email Post
Labels: Books Church Ministry Mission Religion and entertainment Reviews Seminary