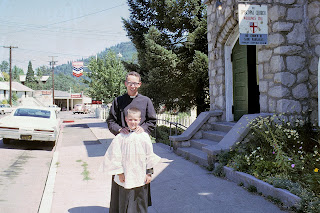 49 Listen to me, coastlands;
pay attention, peoples far away.
The Lord called me before my birth,
called my name when I was in my mother’s womb.
2 He made my mouth like a sharp sword,
and hid me in the shadow of God’s own hand.
He made me a sharpened arrow,
and concealed me in God’s quiver,
3     saying to me, “You are my servant,
Israel, in whom I show my glory.”
4 But I said, “I have wearied myself in vain.
I have used up my strength for nothing.”
Nevertheless, the Lord will grant me justice;
my reward is with my God.
5 And now the Lord has decided—
the one who formed me from the womb as his servant—
to restore Jacob to God,
so that Israel might return to him.
Moreover, I’m honored in the Lord’s eyes;
my God has become my strength.
6 He said: It is not enough, since you are my servant,
to raise up the tribes of Jacob
and to bring back the survivors of Israel.
Hence, I will also appoint you as light to the nations
so that my salvation may reach to the end of the earth.
7 The Lord, redeemer of Israel and its holy one,
says to one despised,
rejected by nations,
to the slave of rulers:
Kings will see and stand up;
commanders will bow down
on account of the Lord, who is faithful,
the holy one of Israel,
who has chosen you.

We are in the season of Epiphany, the season of revelation and light. It probably is true of every era, but it seems as if we have entered a season of darkness. Many feel like night has fallen, and we simply can’t see our way forward. For some, this might feel like being abandoned by God. They join the Psalmist crying out “My God, my God, why have you forsaken me” (Psalm 22:1). There is good news, however, for into this darkness steps the servant of God, who reveals the glory of God.

The Day of Epiphany has come and passed. We have joined Jesus at his baptism, where we watched as the Spirit fell upon him, and the voice from heaven declared him to be the beloved. In him, we declare, God is incarnate. In him, as John reveals, the light shines in the darkness, and despite everything that came against him, the darkness did not and does not overcome him (John 1:5). During this season after Epiphany we attend to the light. We look for the places where God is being revealed, so that we might be made new. With this in mind, we continue our journey through the readings from the Hebrew Bible.

The Word of God as revealed through the words of the one we call Second Isaiah, speaks of a Servant of God who is the light to the nations. When we read a text like this, especially reading at as Christians, we need to take stock of the multiple levels of interpretation that are present. I think it’s appropriate for Christians to see Jesus in these words, but we must be careful about jumping to that interpretation without attending to original contexts and readings.

The prophet tells of one who speaks to the Coastlands, that is to a people living faraway? Who is this one who speaks? Who is the one who was called from his mother’s womb? At level, this must be the prophet’s own sense of call. We don’t know his identity, but he reveals to us that before he was born, God had chosen him for a purpose.

I wonder, do those of us attending to this text, see ourselves being called by God from before birth? Do we have a sense of God’s guiding hand upon our lives? I wonder about that at times. Even though I didn’t anticipate being a pastor early in life, there are a few markers along the way that might be suggestive. I was an acolyte at the age of 9, serving at the altar, at St. Barnabas Episcopal Church. Now I was one of only two children in the church of an age who could do this, but still is this a sign?  I would later serve as a lay reader at St. Paul’s Episcopal Church. Fr. Green decided that since I read the liturgy with enough volume, I might as well lead it. Was this a sign of a call?  I ask these questions from the perspective of a non-Calvinist, non-predestinationist, open theist, kind of Christian, who nonetheless finds some sense of purpose in words like this.

While I think that the prophet is reading his own call into this text, it’s clear that he also has in mind the people of Israel (now the remnant we call Judah). The servant of God is Israel, or the remnant thereof. The people who heard this word lived exile in Babylon. They were wondering about their future. What they knew was that the capitol city lay in ruins, the Temple of God with it. The monarchy had been essentially destroyed as well. So, who would they be if they returned home? What would be their calling? The word of the prophet is quite direct: “You are my servant, Israel, in whom I show my glory.” When it comes to glory, we’re talking about light. A bit later in this passage, the prophet says to a people living in exile:

It is not enough, since you are my servant, to raise up the tribes of Jacob and to bring back the survivors of Israel. Hence, I will also appoint you as light to the nations so that my salvation may reach to the end of the earth. (v. 6).

It’s not enough for the exiles to return home. No, God has plans for Israel (the tribes of Jacob). God is appointing Israel to be the “light to the nations,” so that the message of salvation might reach the ends of the earth. That is Israel’s calling. It is also our calling.

From a Christian perspective, Jesus takes on the mantle of the servant. That is, Jesus is the one Isaiah describes as being the suffering servant. He is the one who is despised by the nations (even as Israel was despised). But, despite the rejection and the resistance, Jesus is the light of the world. As the light, he brings the salvation to the world. Yes, even to the ends of the earth. The commission that Jesus gives the Disciples on the day of Ascension reflects this message. “you will be my witnesses in all Judea and Samaria, and to the ends of the earth” (Acts 1:8).