Christians can be such literalists. I think it's a disease engendered by the Enlightenment. I have nothing against the Enlightenment or being rational, but at times the rationalism engendered by the Enlightenment has diminished the power of our imaginations. I say this as one who is more likely to read non-fiction than fiction. Fortunately, from time to time, figures have emerged from within the Christian community who have broken these barriers and invited us to broaden our hearts and minds to embrace the fruit of our imagination without abandoning our faith. Among those who have contributed to the expansion of our imaginations is a collection of figures who came to be known as the Inklings. Best known amongst this group of writers and thinkers, most of whom were connected to Oxford University, were C.S. Lewis and J.R.R. Tolkien. Both men developed a fandom that continues to this day among religious and non-religious people.

There is another figure who during his lifetime sought to encourage the imagination of his students, and that person was Clyde Kilby, the man whose essays make up this volume published by Paraclete Press. Kilby was an English professor at Wheaton College from the mid 1930s to his retirement and then death (1986), who influenced a generation of evangelicals including Luci Shaw, Mark Noll, Thomas Howard, and the two editors of this volume. He was also the creator of the Wade Collection at Wheaton that contains the writings, letters, and manuscripts of several writers including Lewis, Tolkien, Dorothy Sayers, and others. That Paraclete is releasing a two-volume set of his essays thirty years after his death suggests that his influence continues to this day, or perhaps there is need for his influence within the evangelical community. The conclusion is that Kilby opened a world of wonder to his students and others whom he influenced. Loren Wilkinson put it this way: “Clyde Kilby was fundamentally a teacher, but what he had to teach was not a collection of facts; rather, he taught an awed, thankful, and joyful stance toward creation and Creator” (p. xiii). 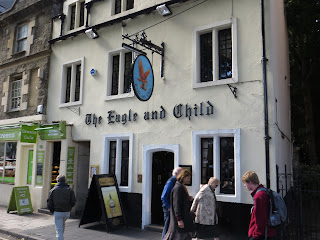 In this collection of essays titled A Well of Wonder, the first of two volumes, we’re invited to Eagle and the Child, which keeps alive the story. I ate in the very room in which the group gathered). If you’re a fan of Lewis, Tolkien, Sayers, Charles Williams, you will enjoy this exploration of their work.engage with Lewis, Tolkien, and the Inklings, that famed literary group that met regularly in Oxford (often at one of the pubs in Oxford -- the best known being the

The book is divided into three sections. The first section deals with Lewis, the second with Tolkien, and the third with the Inklings and the Wade Collection at Wheaton College. Among those encountered in part three are Dorothy Sayers, Charles Williams, and George McDonald, with McDonald being precursor of the Inklings. In these essays Kilby celebrates the imagination, myth, and the act of writing itself. We learn something of Kilby, as well as the people with whom he chose to interact.

The lengthiest section of the book is the first. That is the section that focuses on the work of Lewis, including his apologetics and his fiction.  As one might expect from a collection of essays, many of which had been published earlier, there is much overlap, especially when Kilby discusses the message of the works of each author. What is interesting about Lewis is that he combined a strong commitment to logic, a discipline in which he was trained early in life, with an appreciation for myth. It was the commitment to logic that led to his atheism, but also provided a means toward conversion. Readers of Lewis may be drawn to his apologetics or his fiction. Kilby was attracted to both. As for me, while I enjoyed his apologetics when I was young, it is his work of fantasy (The Chronicles of Narnia) that have stayed with me. Of his one visit with Lewis, Kilby noted the humility he found in the man, along with "an incipient good humor and genuineness that makes a conversation with him a real pleasure" (p. 19). We learn of his deep faith, his more High-Church Anglican proclivities, and his disdain for hymns (though he liked music, just not church music). He was orthodox but not evangelical. His greatest contribution seems to be the celebration of the imagination.

In section two, we meet up with Tolkien. I must admit that I've never gotten into Tolkien. I watched the movies with my son, but I've not read Tolkien. That said, this section is a helpful introduction to Tolkien, especially regarding the deep Christian spirituality that underlies it (though Tolkien strongly insisted that this wasn’t allegory). Whereas Lewis converted to the Church of England, Tolkien was a staunch Roman Catholic. While he resisted the idea that his works were allegory, there is religious foundations to these books, even though he engaged his spirituality making use of mythology. While Kilby only met Lewis on one occasion, he became fast friends with Tolkien, providing support to Tolkien in his effort to bring into a publishable form The Silmarillion, a book that was designed to provide a foundation for later stories, but which was published in unfinished form long after Tolkien’s death. Readers of Tolkien will find Kilby's analysis of the theological dimensions helpful. Using the definition of myth developed by Mircea Eliade, he believes that Tolkien's work exemplified the yearning for the Golden Age that is true reality, but has since disappeared. He writes that "Mythic man is concerned with being rather than with mere living" (p. 155-156).  One other piece of information that I learned from this was that Tolkien translated the Book of Job from French to English for the original Jerusalem Bible. Like Lewis, he was influenced in his own writings by his study of earlier mythology and Medieval works. After all, professionally, he was a scholar of Anglo-Saxon writings. 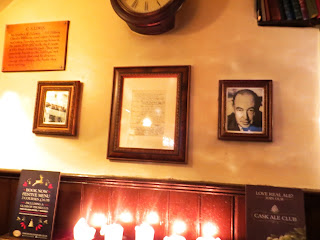 Part three of the book is the briefest section, but it is an important one. In this section titled "The Inklings as Shapers of a New Christian Imagination," we read essays that describe the work of Charles Williams, an older contemporary of Lewis and Tolkien, who became a key figure in the group. His own writings, though less known, were greatly influential on the two giants. He also engages with Dorothy Sayer, a writer of detective novels and theology. There is a chapter on the emerging friendship of Tolkien, Lewis, and Williams, from this friendship came the Inklings, a rather informal group rooted in the relationships of the three men.

In the final chapter, we're offered an interview with Kilby published in the Christian literary journal Arkenstone titled "Myth: The Nostalgia for Eternity." In this interview, he notes that according to Eliade, myth was "a nostalgia for eternity." He notes that the word myth is used in three ways. In our modern age, it denotes a big lie. Secondly, it is used to describe ancient stories -- Greek, Roman, and Norse myths (all of which are part of the background for Lewis, Tolkien, and others in their circle). The third meaning of the word, is "one that is so deep and endless that you can't even fathom it" (p. 329). At the heart of myth is symbol.

I've not read Kilby before. Having encountered the name, I've not read the man's writings till now. This volume was sent to me by Paraclete to review, and even though I'm not an aficionado of these writers (mostly having read Lewis), I found the book to be a useful guide to well-known writers who were enriched by their faith. It was also good to engage with Kilby’s evangelical faith. It's a much more thoughtful and broad version of evangelicalism than we often encounter today, at least in public life. This is, in many ways, the evangelicalism I often met during my years at Fuller. As noted earlier Kilby influenced evangelical scholars and writers including Mark Noll and Luci Shaw, opening their own minds to a broader world beyond the evangelical one. I appreciate the note in the afterword by Loren Wilkinson, himself a student of Kilby's, that Kilby shared with the authors he invoked a sense of creation being a "source of wonder" (p. 336). Kilby was indeed a Christian scholar, an evangelical in his convictions, but his vision was influenced by a breadth of writers who understood the importance of metaphor and myth to convey deep spiritual insight. It's unfortunate that this vision is often absent today, but here is a voice crying out for a broader vision of the Christian mind. It is a voice that needs to be heeded.
Email Post
Labels: Books C.S. Lewis Evangelicalism Imagination Inklings JRR Tolkien Myth Reviews