Dreaming of the Promised Land with Rosa and Martin 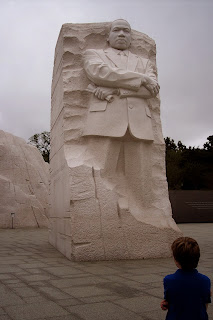 The following essay was published a number of years ago, but in light of what is happening in our nation at this moment, it is as timely as ever. Seeking to honor the memory of Dr. Martin Luther King, Jr. on this his birthday weekend, as well as keeping in mind a presidential inauguration later this week that seems to contradict the dream espoused by Dr. King and by Rosa Parks, I offer this word for your contemplation.

Rosa Parks’ small act of defiance changed history. Her death in 2005 was marked by acts of remembrance fit fora national leader or military hero, but Rosa Parks was neither a politician nor a military hero.  To the unknowing, Rosa was a black woman too tired to get up so that a white man could have his “rightful” seat on a Montgomery, Alabama bus. Whether intended or not, her “act of defiance” and subsequent arrest, sparked a movement that changed America.

A young Baptist pastor picked up Rosa’s cause and organized a bus boycott that set in motion a movement that would knock down segregation’s shameful barriers to the American dream.  In short order Jim Crow gave way, and buses, schools, lunch counters, and water fountains were integrated.  A decade later Congress followed suit and passed the Voting Rights Act, eliminating another legal barrier to equality.

America has not been the same since Rosa Parks refused to give up her seat and a young pastor took up and embodied the cause of equality in America.  It is not surprising that the establishment of Martin Luther King’s birthday as a national holiday was shrouded in controversy. After all, the Civil Rights Movement had let out of the closet skeleton that had blighted American life since the nation’s birth.  History has shown Dr. King to be an imperfect vessel, but his courage and leadership in the face of overwhelming public opposition changed America for the better.  Slavery may have ended in 1865, but its legacy of bigotry and discrimination remained enshrined in American law and culture for another century.

Only thirty-nine when an assassin’s bullet cut short his life, Dr. King’s dream of a society marked by equality and equanimity has lived on.  Like Moses, King bore within himself the mantle of leadership.  He heard the call of those crying out for relief from bondage.   I made it to the mountaintop and he looked into the Promised Land, but as with Moses it would not be his destiny to cross the river.  But, the dream lived on and the people crossed the river and we as a nation began to create a society where character and not one’s color or one’s ethnicity or gender would define one’s place.

Dr. King dreamt that “one day this nation will rise up and live out the true meaning of its creed: ‘we hold these truths to be self-evident: that all men are created equal’."  On that day freedom will ring out from every village, hamlet, state and city, and “all of God's children, black men and white men, Jews and Gentiles, Protestants and Catholics, will be able to join hands and sing in the words of the old Negro spiritual, "Free at last! Free at last! Thank God Almighty, we are free at last!"  It is imperative that this dream not be forgotten.  We have made progress since Rosa Parks chose to keep her seat, but the work is not finished.

Dr. King’s dream challenged and helped shape my world view, but I have lived this dream imperfectly. As a white male I am the beneficiary of a privileged status, and I must be reminded of my calling to bear witness to this dream of freedom, dignity, and equality for all.  This is especially true at a time when decades of progress are threatened by retrenchment that seeks to undermine affirmative action programs and voting rights laws.  Corporate America remains overly white and male, while white males continue to dominate America’s governments and courts from the local level to the federal.  There has also been an increase in bigotry discrimination in our society, especially toward Muslims and Latinos.  The achievement gap separating white America from non-white America is widening.  Things may be better than they were in 1955, but we have yet to achieve Dr. King’s dream of a day when character rather than color or economic status determines one’s fate.  Tomorrow’s day of remembrance reminds us that we must not rest until all people, no matter their race, ethnicity, economic status, gender, religion, sexual orientation, or level of education, receive all their rights and responsibilities enshrined in the Declaration of Independence.

Note:  This essay was originally published in the Lompoc Record and then included in my book Faith in the Public Square: Living Faithfully in 21st Century America, (Energion Publications, 2012), pp 118-119.