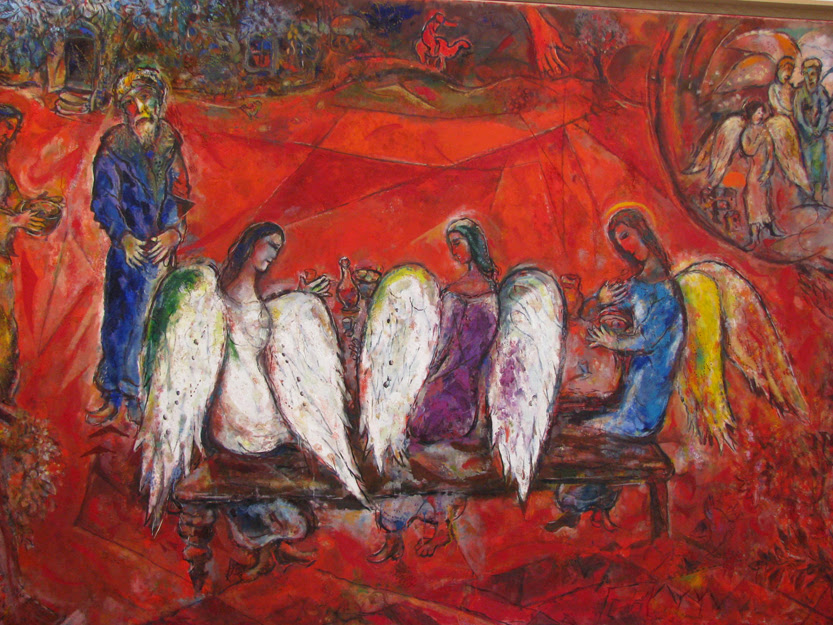 18 The Lord appeared to Abraham by the oaks of Mamre, as he sat at the entrance of his tent in the heat of the day. 2 He looked up and saw three men standing near him. When he saw them, he ran from the tent entrance to meet them, and bowed down to the ground. 3 He said, “My lord, if I find favor with you, do not pass by your servant. 4 Let a little water be brought, and wash your feet, and rest yourselves under the tree. 5 Let me bring a little bread, that you may refresh yourselves, and after that you may pass on—since you have come to your servant.” So they said, “Do as you have said.” 6 And Abraham hastened into the tent to Sarah, and said, “Make ready quickly three measures of choice flour, knead it, and make cakes.” 7 Abraham ran to the herd, and took a calf, tender and good, and gave it to the servant, who hastened to prepare it. 8 Then he took curds and milk and the calf that he had prepared, and set it before them; and he stood by them under the tree while they ate.

9 They said to him, “Where is your wife Sarah?” And he said, “There, in the tent.” 10 Then one said, “I will surely return to you in due season, and your wife Sarah shall have a son.” And Sarah was listening at the tent entrance behind him. 11 Now Abraham and Sarah were old, advanced in age; it had ceased to be with Sarah after the manner of women. 12 So Sarah laughed to herself, saying, “After I have grown old, and my husband is old, shall I have pleasure?” 13 The Lord said to Abraham, “Why did Sarah laugh, and say, ‘Shall I indeed bear a child, now that I am old?’ 14 Is anything too wonderful for the Lord? At the set time I will return to you, in due season, and Sarah shall have a son.” 15 But Sarah denied, saying, “I did not laugh”; for she was afraid. He said, “Oh yes, you did laugh.”

***************
The season after Pentecost presents a dilemma if you’re going to provide a lectionary reflection on the first reading from scripture. There is a “semi-continuous” stream and a “paired” stream. So, which do you choose? I noticed that Feasting on the Word has chosen the paired version, but after some thought I decided to go with the semi-continuous version, which will take us through Genesis and into Exodus. We start with the visit of the three strangers to Abraham and Sarah at the Oaks of Mamre. It is here that a promise is given concerning a child, who will be the key to a blessing. But, the text opens with a story of hospitality shown to strangers. This may be an important word to our culture at a time when fear of the stranger seems rampant.

There is a tendency in our culture to think of hospitality in terms of dinner parties and maybe the hotel industry. But at its root, hospitality has to do with the heart, about the way we view others with whom we come into contact. Lonni Collins Pratt and Fr. Daniel Holman, OSB, provide us with a helpful definition of what hospitality entails in their book on Radical Hospitality:

Hospitality requires not grand gestures, but open hearts. When I let a stranger into my heart, I let a new possibility approach me. When I reach past my own ideas, I begin to stretch myself open to the world, and this opening of my heart could change everything. That’s pretty frightening stuff. You can’t ever be the same if you start doing that kind of thing.  [Radical Hospitality (Kindle Locations 732-734). Paraclete Press. Kindle Edition.]

With that in mind we come to the story of the visit of the three strangers to Abraham and Sarah. They open their hearts and their home and receive a blessing as a result.

It is worth noting that these three strangers, who visit Abraham and Sarah, will proceed from here to Sodom, where they will not be received with the same kind of hospitality as at the Oaks of Mamre (Gen. 19). Here and elsewhere in Scripture, there is a strong message about showing hospitality to strangers. Consider the word in Matthew 10, where Jesus sends the twelve out on a mission trip, and tells them that when they enter a village, find a place that is worthy (hospitable?) and stay there. If no home is open, then they are to shake the dust off their feet as an act of judgment, for “I tell you, it will be more tolerable for the land of Sodom and Gomorrah on the day of judgment than for that town” (Mt. 10:5-15).

Returning to Genesis 18, and the encounter with the three strangers, it’s clear that this is a divine visitation (maybe not the three persons of the Trinity, but still a divine visitation). What this passage does is raise questions about the meaning of hospitality. How might welcoming strangers be an act of welcoming the divine? We can take this locally or more globally, personally and communally. How might we open our own homes to the other? In our culture, which places a premium on the sanctity of private space, we tend not to open our homes just to anyone. So, maybe we can start with a broader conversation about openness to the other. Perhaps the reading from Genesis can help us re-imagine the conversation about immigration and refugees.

Acknowledging that government policy and church policy might be different, that church and state are separate entities, it is also true that many who serve in government claim Christian faith. So, how does one’s faith influence one’s openness to refugees fleeing from the violence in a place like Honduras or Syria? Then, even as I was working on this reflection, I heard that ICE was roundingup Iraqi nationals, the majority of whom are Chaldean Christians, because they are undocumented. One person who was detained came here as a two-year old and had an arrest some fifteen years ago. So, where is the compassion? For many of those who have come here from Iraq, deportation could be a death sentence. The situation for Christians in Iraq and Syria, is tenuous at best. Many of those who have stood in opposition to welcoming refugees from Syria, claim to be good Christians. It’s not my place to judge whether they are Christians, but I do find this interesting. Perhaps the fact that ICE is detaining Christians will lead to a change of tuneand a bringing together of Muslim and Christian Iraqis.

What is happening today is not unique. I’ve been reading a spiritual biography of Eleanor Roosevelt. From this book, I learned about her frustration with the government (including her husband) regarding Jewish refugees fleeing the Nazi persecution and then extermination of Jews in Europe. On several occasions ships carrying Jews were turned away, in large part due to antisemitism on the part of people, many of whom were good church-going people.  It was also an expression of an “America First” mentality, in which the lives of millions of Jews and others caught under the Nazis were ignored. When it was proposed that 20,000 children be admitted as refugees, members of Congress and the administration stood in the way. We learn that the late First Lady struggled with her own latent antisemitism, but she strove to overcome it because she believed that welcoming Jewish refugees was the right thing to do. That commitment was rooted in large part in her faith, which helped her overcome that prejudice (Harold Smith, Eleanor, pp. 111-137).

To welcome the stranger is to welcome the divine. Abraham and Sarah offered their very best, not the scraps of their tables, to the strangers. He waited as they ate. In response to this welcome, the strangers promised Abraham that Sarah, his wife, would bear a son, that despite their great age. Sarah was past the age of child-bearing, so such a thing was laughable (and Sarah did laugh when she heard it). Despite the laughter, the promise stood. Of course, Abraham and Sarah had already attempted to fulfill this promise by proxy through the “gift” of Hagar, by Sarah, to Abraham, leading to the birth of Ishmael (Genesis 16), but apparently that wasn’t what God had intended, since God promised that Sarah would be the mother of nations (Gen. 17:15-19). In the end, Sarah will have a child, as promised, and his name will be Isaac (Gen. 21:1-7), fulfilling the promises made to them that through them and their descendants the nations would be blessed (Gen. 12:1-3).

You can understand how Sarah must have felt. She kept hearing the promise, but she knew her body. It’s not that Abraham and Sarah hadn’t tried. But for some reason she didn’t get pregnant. While she did offer Hagar to her husband, the fact that she gave birth didn’t help the situation. Abraham might have been happy, but all she could do was laugh (lest she cry). As Carolynne Hitter Brown reminds us, in that culture, her inability to conceive would have brought shame upon her. So, now, “after years of waiting, a disastrous affair, and menopause, Sarah found it funny that God would now show interest” [Preaching God’s Transforming Justice, Year A, p. 280]. Yet, the promise was still there, and in time will be fulfilled.

This leads us back to hospitality, and what it requires of us. My sense is that each of us will have to address this question. What does it mean to be hospitable to strangers, knowing that in doing so one might entertain angels unaware (Heb.13:1-2)? Lonni Pratt and Daniel Holman speak of this act of welcome in sacramental terms:

Food is basic to human existence, but it is more than it seems to be; it represents the More. In the Christian tradition, bread and wine are sacramental, carrying to us the presence of God. The use of a table, utensils, bread, and wine as the means by which Christians receive God is a family symbol. We receive Christ through simple foods, simple utensils, from a guy in a dress (at least in the more liturgical forms of Christianity) who cleans up and puts away the dishes when he’s done. [Radical Hospitality (Kindle Locations 1714-1717). Paraclete Press. Kindle Edition.]

Thus, for Christians true hospitality begins at the Lord’s Table and then moves out from there, and in the context of this reading from Genesis, to the fulfillment of God’s covenant promises of blessing to the nations.