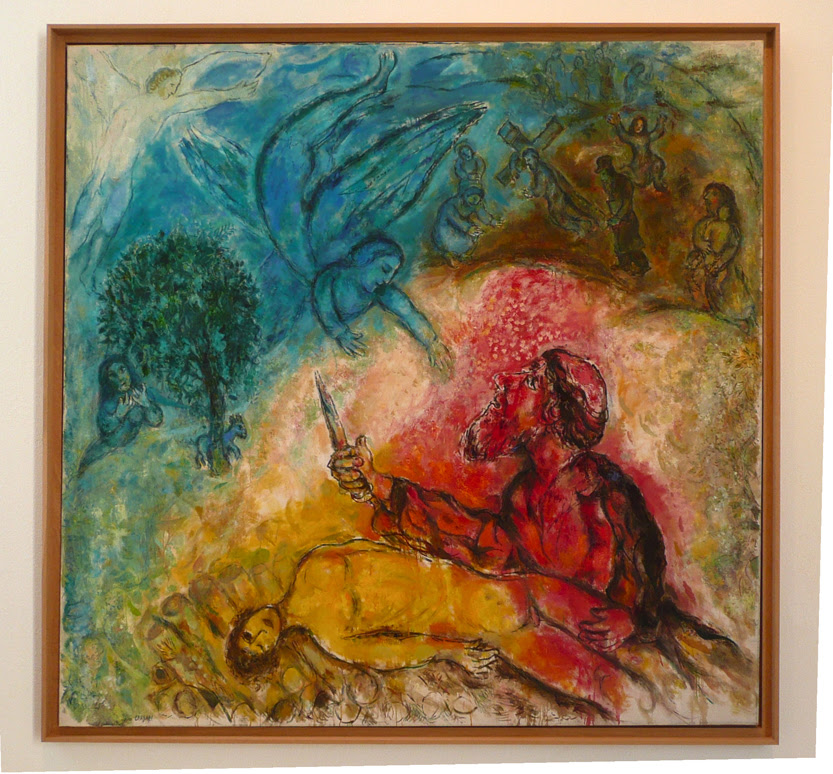 22 After these things God tested Abraham. He said to him, “Abraham!” And he said, “Here I am.” 2 He said, “Take your son, your only son Isaac, whom you love, and go to the land of Moriah, and offer him there as a burnt offering on one of the mountains that I shall show you.” 3 So Abraham rose early in the morning, saddled his donkey, and took two of his young men with him, and his son Isaac; he cut the wood for the burnt offering, and set out and went to the place in the distance that God had shown him. 4 On the third day Abraham looked up and saw the place far away. 5 Then Abraham said to his young men, “Stay here with the donkey; the boy and I will go over there; we will worship, and then we will come back to you.” 6 Abraham took the wood of the burnt offering and laid it on his son Isaac, and he himself carried the fire and the knife. So the two of them walked on together. 7 Isaac said to his father Abraham, “Father!” And he said, “Here I am, my son.” He said, “The fire and the wood are here, but where is the lamb for a burnt offering?” 8 Abraham said, “God himself will provide the lamb for a burnt offering, my son.” So the two of them walked on together.

9 When they came to the place that God had shown him, Abraham built an altar there and laid the wood in order. He bound his son Isaac, and laid him on the altar, on top of the wood. 10 Then Abraham reached out his hand and took the knife to kill his son. 11 But the angel of the Lord called to him from heaven, and said, “Abraham, Abraham!” And he said, “Here I am.” 12 He said, “Do not lay your hand on the boy or do anything to him; for now I know that you fear God, since you have not withheld your son, your only son, from me.” 13 And Abraham looked up and saw a ram, caught in a thicket by its horns. Abraham went and took the ram and offered it up as a burnt offering instead of his son. 14 So Abraham called that place “The Lord will provide”; as it is said to this day, “On the mount of the Lord it shall be provided.”

In Genesis 21, Abraham accedes to Sarah’s demands and exiles his oldest son, Ishmael and Ishmael’s mother. God had encouraged him to do so, and Abraham obeyed. Fortunately, God took care of Ishmael, and he didn’t die. Now, with Ishmael out of the picture, God makes another request of Abraham. Yes, God demands that Abraham offer up the child of promise as a sacrifice. We do know that human sacrifice was practiced at the time, but surely Abraham must have recoiled at such a demand. To sacrifice Isaac would mean he would have sacrificed both of his sons, and if he did so, what would happen to the promise? As for us, what does this passage say about God and our relationship to God?

The story ends with the provision of a substitute, a lamb, who is sacrificed in Isaac’s stead. It could be that this story is a reminder of the choice amongst the people of Israel to abandon child sacrifice, but it raises questions, some of which emerge when we come to the story of the cross. Some see in this action a prefiguring of the sacrifice of Christ, with Jesus being the lamb who dies as our substitute. Even if that’s reading too much into the text, it doesn’t take away the troubling picture of God demanding human blood. There’s a further issue, and this the question of whether the God of Sinai and Calvary would test a follower in this way.

Soren Kierkegaard famously wrestles with this in his book Kierkegaard: Fear and Trembling (CambridgeTexts in the History of Philosophy)

. In one scenario, Isaac pleads with God to save him from his father’s murderous intent.  In the story Kierkegaard pictures Abraham murmuring to God: “Lord in heaven, I thank you; it is surely better for him to believe I am a monster than to lose faith in you” (p. 9).    In other words, Abraham is willing to take the rap for God’s monstrous request.  But as the story goes on, even though the lamb was provided, “from that day on Abraham became old; he could not forget that God had demanded this of him.  Isaac flourished as before, but Abraham’s eyes were darkened, he saw joy no more” (p. 9).  I wonder what kind of questions this passage raises in our hearts and minds about the nature of God and God’s expectations of us.  What do we make of this suggestion that God “tested” Abraham.  Does God really do such things?  If so, did someone tip Abraham off so that he needn’t flinch since he knew God wouldn’t make him do it after all.  Or, did he take solace in the belief that Isaac would be going to heaven anyway?  Kierkegaard reminds us that for Abraham the afterlife was to be found in the blessing provided by his posterity, and the only way he would have such a blessing was if Isaac lived.  Thus, according to the Danish theologian, Abraham “believed the preposterous,” and had he doubted, “he would have done something difficult, something great and glorious.” (p. 17).    Yes, in the end God provides and Abraham and Isaac return home together, but I imagine something did change in the relationship.  So, what is the moral of the story?  Could it be that doubt is an important part of faith?  That questioning God has its place, even if it could be called sin?  I wonder.  And if obedience has its rewards, might doubt have its own rewards?

Abraham acted because he trusted God. As he told Isaac in verse 8, “God will provide.” Provide what, Abraham doesn’t appear to know the answer. But he trusts completely. As Walter Brueggemann puts it: “Abraham find his only refuge in the divine provider whom he finds inscrutable but reliable. Abraham has turned from his own way to the way of God which lies beyond his understanding (cf. Isa. 55:8-9) but upon which he is prepared to act in concrete ways.” [Genesis, p. 188]. I don’t think I could have acted as Abraham did in this story. I would have balked. I would have refused. But Abraham acted, and Abraham was understood to be a man of faith to be emulated. (Hebrews 11).. As for God, God is inscrutable. God can’t be fully comprehended. Again, turning to Brueggemann, “God is shown to be freely sovereign just as he is graciously faithful. That God provides shows his gracious faithfulness. That God tests is a disclosure of his free sovereignty. Abraham comes to an awareness that the two marks of God are always encountered together.” [Genesis, p. 189].

The Genesis story raises important questions about God and our relationship to God. The answers might be difficult to hear, but I think that in the end we will be better off.