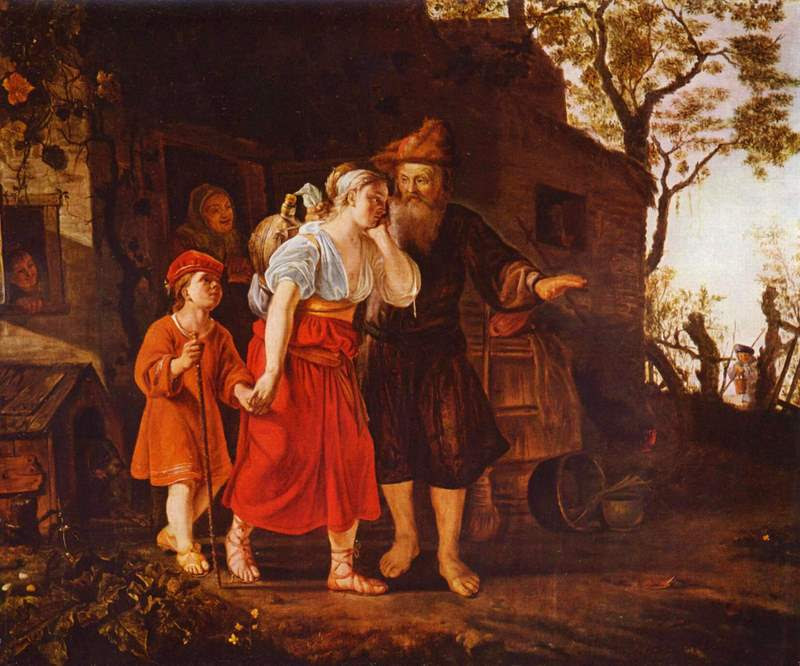 8 The child grew, and was weaned; and Abraham made a great feast on the day that Isaac was weaned. 9 But Sarah saw the son of Hagar the Egyptian, whom she had borne to Abraham, playing with her son Isaac. 10 So she said to Abraham, “Cast out this slave woman with her son; for the son of this slave woman shall not inherit along with my son Isaac.” 11 The matter was very distressing to Abraham on account of his son. 12 But God said to Abraham, “Do not be distressed because of the boy and because of your slave woman; whatever Sarah says to you, do as she tells you, for it is through Isaac that offspring shall be named for you. 13 As for the son of the slave woman, I will make a nation of him also, because he is your offspring.” 14 So Abraham rose early in the morning, and took bread and a skin of water, and gave it to Hagar, putting it on her shoulder, along with the child, and sent her away. And she departed, and wandered about in the wilderness of Beer-sheba.

15 When the water in the skin was gone, she cast the child under one of the bushes. 16 Then she went and sat down opposite him a good way off, about the distance of a bowshot; for she said, “Do not let me look on the death of the child.” And as she sat opposite him, she lifted up her voice and wept. 17 And God heard the voice of the boy; and the angel of God called to Hagar from heaven, and said to her, “What troubles you, Hagar? Do not be afraid; for God has heard the voice of the boy where he is. 18 Come, lift up the boy and hold him fast with your hand, for I will make a great nation of him.” 19 Then God opened her eyes and she saw a well of water. She went, and filled the skin with water, and gave the boy a drink.

**************
God made a promise and a covenant with Abraham. The promise was that God make of him a great nation, and that he and his descendants would be a blessing to the nations. Indeed, God promised to make Abraham’s descendants as numerous as the stars in the heaven, something Abraham had difficulty believing since he and Sarah remained childless (Gen. 12:1-3; Gen. 15:1-6). At one point Abraham and Sarah decided to go with a surrogate. Sarah gave Abraham her slave, Hagar, as her surrogate, with the expectation that if Hagar bore a child to Abraham, this would be her child, and thus the promise might be fulfilled. Fulfilled it was, as Hagar bore a son, whom Abraham named Ishmael (Gen. 16:1ff). The problem of an heir has been solved, and we can move on, except that God has other ideas. God intends for Sarah to bear a child herself, despite the seeming impossibility of such a thing happening. Still God had promised that Sarah would be the mother of nations and kings (Gen. 17:15-22).  Despite Sarah’s own incredulity, she does bear a son with Abraham, and she names him Isaac (Gen. 21:1-7). In her mind, Isaac should be the heir, but since Ishmael is the older of the two, he still has a claim on the inheritance, and that is a problem in the mind of Sarah, who is determined to protect her son’s claim. Abraham may have great affection for both of his children, but he will have to choose, or will he?

At the time that Isaac was weaned, and Sarah saw the two boys playing together. Jealousy took hold, or perhaps fear of what might happen in time when choices about the heir must be made, so she demanded that Abraham send Hagar and Ishmael away. That distresses Abraham. He can’t bear to send away his son whom he loved. It is at this point that God steps in, and the story becomes even more complicated.

This story is a difficult one to engage. It raises questions about our spiritual ancestors and God. Paul makes use of the story, turning the two mothers and their sons into an allegory to distinguish between law and gospel (Gal.4:21-31). Paul catches the point of the broader story—Isaac is the child of promise, and Ishmael is not. At the heart of this story is the human struggle for survival and control over one’s life. Sarah understood what perhaps Abraham didn’t—there could only be one heir, and that all other children would serve the other. Sarah wasn’t going to let the child of her slave oust her own flesh and blood. If she hadn’t been able to give birth to Isaac, she might have accepted Ishmael. Now he was a rival and had to be put away.

It’s here that God intervenes in the story. God tells Abraham to do as Sarah requested. God told Abraham to send away the rival to Isaac and his mother. Then there would be no questions about who was the proper heir. So, despite his affection for his first-born son, he accedes to Sarah’s demands and sends mother and child out into the wilderness, with nothing more than bread and water on which to survive. When the water that Abraham gave them runs out, Hagar in despair walks away, leaving her son to die from thirst and starvation on his own. She can’t bear to watch her son suffer and die. It is too much for her. Her heart was broken by this mean-spirited decision to send them out into the desert in exile. Surely Abraham knew this would happen.

When you read a passage like this, how do you feel? What emotions emerge? Do you simply pass over this story, because it doesn’t fit your vision of God or of Abraham and Sarah? Do you feel as if Hagar and Ishmael are expendable, because of their foreignness or their lower social status? Or do you feel compassion for them, and therefore anger toward God or Abraham and Sarah? God’s initial engagement seems so cold-hearted. It is definitely not a “pro-life” position.

Fortunately, the story doesn’t end with the death of either Ishmael or his mother. In fact, God does step in and assist them. God hears the cry of Hagar and offers a solution. Did God feel remorse, or is this simply part of the story? If you felt anger with God at agreeing to send Hagar and Ishmael away, does this redeem God in your eyes?

When Hagar cries out, God hears her weeping for her son. God sends an angel, who asks what seems to be a rather odd question: “What’s troubling you?” Surely the angel knows the answer to that question. Her son is going to die a cruel and inhumane death and she can do nothing to prevent it. Besides, her predicament was caused by God, who suggested that Abraham send her and her son into exile.  Despite what has transpired, God has an answer to her predicament. In fact, God makes a promise to her. God promises that her son, the son of Abraham, would indeed share in the promise, for he, like Isaac, would be the father of nations.

It was then that Hagar spied a well that would sustain her and her son, who would be the ancestor of nations, even as Isaac would.

We are probably more aware of and comfortable with the story of Sarah and Isaac. We speak of Abraham and Sarah together as ancestors of nations, but we must not forget that other line, the line of Abraham and Hagar. It is a line that is remembered by our Muslim friends (dare we say spiritual cousins?). In the Qur’an, God makes Abraham the “imam for mankind” (Q 2:124). That is, God makes him the leader of humanity. Of the covenant, the Qur’an speaks of it having been made with Abraham and Ishmael (Q. 2:125).

The word given here is that God was with Ishmael and that he became an expert in archery. His mother got him a wife from Egypt, and the rest is history, and continues to be history.

It is from these stories that we have come to understand the premise of Judaism, Christianity, and Islam are Abrahamic religions. Christianity is Abrahamic through its roots in Judaism (it was originally a Jewish sect that spread into the non-Jewish world. Islam claims descent from Abraham through an alternate genealogical line, that is, through the line of Ishmael rather than Isaac. Both lines claim primacy, but perhaps we can affirm the promise that God makes that both will be fathers of nations. If so, could we see in this a path to peace? Islam, being the youngest of the three religions, assumes that the three are related. At times they are rivals, but they also share much.