Confessing Faith as Disciples of Christ 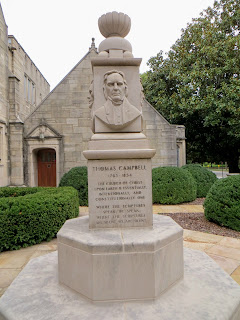 Note: What follows is the bulk of a chapter of a book on Disciples theology that I had begun to write in 2009. I had been teaching a Theology 101 study at the church, and thought there was a need for something akin to Ronald Osborn's The Faith We Affirm. I still think this is true, and perhaps someday I'll complete the project.  For now, I'd like to share this word on confession of faith---with Disciples of Christ in mind.

Theology may seem like a strange and esoteric idea. It may sound as if it is something highly trained, professional people would do, or at least those with an avocation to talking about things that have little to do with normal life. But, the fact is, theology should be very close to the hearts of every Christian, for if we think about and talk about God and the things of God, we’re doing theology.  It is, as Philip Clayton writes: “Theology therefore belongs to everyone who is drawn to Jesus and wants to figure out what it means to be identified with him in this immensely complex, twenty-first-century world.” [TransformingChristian Theology, 2-3.]

Theology, when done in faith is also, or can be, transformative.  The reason that this is so is that theology is a spiritual practice, which just like prayer or Bible reading is something that can and should be spiritually enriching.

Perhaps the reason why we don’t do theological reflection is that we’re afraid of what might happen when we share our thoughts about God, especially our doubts and concerns. We’re afraid that the church won’t be a safe haven for our conversation. At the same time, many have concluded that there is no connection between the heart and the mind—and theological reflection is seen as a “head” type of activity, which is foreign to faith. And the reality is that often Christian education is merely indoctrination. Diana Butler Bass writes in some detail, sharing numerous stories of the vital nature of experiences with theological reflection, and she offers this thought:

In the emerging mainline, questions—the gap between human knowing and God—are an essential part of the pilgrimage. Intellectual engagement takes pilgrims to the edge of the gap where, unexpectedly, theological reflection melds into the Spirit. At that place, believers glimpse God, and the vision can empower—as it did for Moses when he saw God’s back—acts of faith. Head, heart, hands. Connected and integrated.  [Christianity for the Rest of Us, pp. 198-199].

Theology and Confession of Faith

Although theology can be a professional activity, the domain of experts in their fields, it is also the domain of every person who thinks about and talks about God. The resources that professional/academic theologians and biblical scholars provide us are extremely helpful, but this is not the end of theology.  It is only one aspect of the work of theology. There is another dialog partner—the voice of the people, whether believer, seeker, or even skeptic. Indeed, it is their questions and concerns that drive the broader theological conversation.

For most of us the theological conversation begins at about the time we begin to ask questions about God, questions that can in many cases lead to confessions of faith. Indeed, in the Disciples tradition, we make the Good Confession when responding to the invitation to believe and baptized or to become a member of the faith community. That confession is simple, asking that a person confess that Jesus is the Christ, the Son of Living God, and my Lord and Savior. This confession is taken from Peter’s confession (Matthew 16:16). Most churches include the final clause, which reads “Jesus is Lord and Savior,” even though it’s not in the text itself. But, it does personalize the confession.

Confessions of Faith and Creeds

The word creed comes from the Latin word “credo,” which means “I believe.” A creed can be a personal confession—a Credo—or it can be a community confession. It can be a statement of identity or it can be a test of fellowship.

These creeds or statements of faith emerged early in the life of the church, maybe as early as the first century. Indeed, there are brief confessions to be found in Scripture itself—including the Good Confession found in Matthew 16. One of the earliest confessions of faith is the Shema, the Jewish confession that there is one God.

The New Testament has several confessions, including that found in Philippians 2, which points us to the example of Christ, who though in the form of God chose to take human form (Philippians 2:5-11).  Other confessions include John 1:1-14; Romans5:1-11; Colossians 1:15-20; and Ephesians 2:1-10.

By the second century brief confessions, such as the Rule of Faith, had emerged. These confessions were used to distinguish between normative and non-normative forms of the faith. They were also used to help develop the biblical canon. By the fourth century, as Constantine embraced the church, it was deemed important that the church have a common confession of faith. Thus, over the course of the 4th century, beginning at the Council of Nicaea in 325 and culminating in 385 at Constantinople the Nicene Creed, which is confessed by a majority of Christians, came into existence. Among the issues it sought to resolve were the divinity of Christ and the Trinitarian nature of God.

New confessions have been added through the years, each created to answer a new question or challenge. Many churches use these creeds to define membership. If you cannot or will not affirm what is written, then one is excluded from the community.

Most confessions of faith emerge because some doctrinal issue has created conflict or confusion.  In responding to the question, formulations are drawn up, and then the church is expected to give its assent. Thus, the focus is on the community rather than the individual.

The Disciples of Christ and Creeds

The Christian Church (Disciples of Christ) is a non-creedal church. That is, it doesn’t require that members, whether clergy or laity, subscribe to or affirm the Nicene Creed or any other established creed. An oft quoted statement from the Disciples tradition is simply this: “No Creed by Christ, no book but the Bible.” Thomas Campbell considered creeds divisive because they placed an interpretive grid upon the biblical faith. He believed that the Scriptures, especially the New Testament, was sufficiently clear that one need only affirm that which is explicitly revealed in the words of Scripture.  With that in mind, he believed that it was necessary to give each person be given the freedom to discern the meaning of the gospel.

That in order to do this, nothing ought to be inculcated upon Christians as articles of faith; nor required of them as terms of communion, but what is expressly taught and enjoined upon them in the word of God. Nor ought anything to be admitted, as of Divine obligation, in their Church constitution and managements, but what is expressly enjoined by the authority of our Lord Jesus Christ and his apostles upon the New Testament Church; either in express terms or by approved precedent. (Declaration and Address, prop. 3).

Thus, even though Campbell was Trinitarian, he did not make affirmation of the Trinity a necessity for church membership or Christian fellowship. This became important because Barton Stone, another frontier reformer did not affirm the doctrine of the Trinity.  He was an Arian, that is, he did not believe that Jesus was of the same divine substance as the Father.

While Disciples, as a tradition, do not have a creed or definitive statement of faith that members are require people to affirm, that doesn’t mean that Disciples have no beliefs, that one can believe whatever one wants. Campbell was clear, we should affirm that which is affirmed by the Scriptures. Creeds were, in his mind, human creations and therefore could not be definitive or authoritative statements that can put upon a person. Instead, one is sent back to the text to hear a word from God.

Theology and the Personal Confession

If, as we have affirmed, theology is, by definition, thinking and talking about God, then a community of faith, if it is to share life together must be able to talk about God together. The question is—are there fences around our beliefs? Is there a center, which must be confessed—the essentials upon which we must unite? If so, what are they? And, are some things beyond the pale? If so, what are they? Are they doctrinal or are they ethical in nature?

The last question is an important one, because prior to the Civil War there were White Americans who were, by most doctrinal definitions, orthodox. They believed the “right things,” but they also owned slaves, keeping human beings in bondage, solely because the color of their skin. For many this was a deal breaker when it came to Christian fellowship. What are the deal-breakers today?
Email Post
Labels: Confession of Faith Confessions Creeds Diana Butler Bass Disciples of Christ Philip Clayton Ronald Osborn Theology

John said…
Theology is the highest work of the imagination, applied to interpret and construe reality through the lenses of faith. The intention is to discern meaning and context and a degree of order to an otherwise chaotic world. Faith is first and foremost a belief in things unseen. People of faith, from Christians, to Buddhists and perhaps even atheists have a sense that there is an ordering principle in the universe. Without order there is chaos, and perhaps madness. Interestingly the work of the Judeo-Christian God begins with a divine act of will, the imposition of order over the chaos of reality. And in the image of that God we imagine that we, as creatures formed out of that chaos through the imposition of the divine imagination, are empowered as stewards to continue the work of ordering the universe, and thus contain the continuenthe work of containing the chaos.

That is the work of theology, and that is work in which every human being at some level is constantly engaged in: discerning order from within the chaos.
8:08 AM